With current or near-future projectable technology, how long would it take a ship to fly from Earth to a theoretical Earth-Sun L4 or L5 space station

Lets assume there's a space station already built, so this would be a flight off earth, brief acceleration, coasting most of the way, brief deceleration and connect with the station. I'm assuming one or two captured asteroids are already at L4 providing basic materials like Water, Oxygen, Nitrogen, CO2, Metals and Silicon for solar panels, so it doesn't have to be an ultra heavy launch from Earth, but moderately heavy, maybe 2 astronauts and some equipment.

And the theoretical station could orbit L4 or L5 so it would have closer and further from the Earth. The journey wouldn't need to go all the way to the L4 point, 60 degrees ahead but could meet up at say, 45 or 50 degrees.

Using this article as a baseline, it says 260 days is a standard estimate to fly to Mars though faster is possible but difficult. It doesn't say how long the journey is, but eyeballing it, it's a bit more than half way around earth's orbit, so probably a little over 500 million km.

Using the times listed in this article, NASA has already sent ships to land on Mars in as little as 200 days - Mars Odyssey and taking less time, the distance was probably shorter as well. I'm not an expert in such things, but I'm guessing the weight of the payload was probably on the light side to make it in 200 days, for carrying passengers and some equipment current Mars estimates are probably more like the 260 day estimate (as a guess).

A journey to about 50 degrees ahead or behind Earth's orbit would be considerably shorter. maybe as little 75 or 80 million km to dock with my theoretical space station. I get a ballpark estimate of about 50 days. My question is, is that about right or is there something about the L4 or L5 trip that I'm overlooking? Like, it might take longer because the ship would have to fly closer to the sun before it coasts to L4 due to it's higher velocity.

The STEREO missions are probably not relevant as they took much longer.

Any additional relevant information on current or under development ship/engine designs and how that might affect time of travel would be appreciated. Thanks.

You can't really compare the time for interplanetary voyages just by comparing distances, because everything is moving around the Sun, and the challenge is at least as much to end up moving at the same speed as your target as to be in the same place as it. Also the Sun's gravity has a huge effect on the trajectory.

A journey to L4 or L5 is an interesting one, in that you can get there using as little fuel as you like (once you have escaped from Earth's gravity) at the price of it taking a long time. Let's consider L4, 60 degrees ahead of the Earth. What you do is, strangely, use your engines to slow your motion around the Sun a little. This leaves you in an elliptical orbit whose aphelion (furthest point from the Sun) is at the distance of the Earth, while your perihelion is closer. You start close to the Earth at aphelion. Such an orbit takes a bit less than one year, so when you come to your next aphelion, the Earth hasn't quite completed one full orbit, so you are ahead of it. After enough orbits, you are 60 degree ahead of it, at L4 and you use your engines again to speed up your motion around the sun so that you remain at L4.

So the fuel you need is determined by how much you slow down at the start of this, and speed up at the end, which determines how many orbits of the Sun it takes to get to L4. The fastest version of this uses just one orbit, so you drop to a 10 month elliptical orbit, and 10 months later you are 60 degrees ahead of the Earth -- welcome to L4.

Getting back or going to L5 is the opposite, you accelerate forwards, shifting to an elliptical orbit with perihelion near Earth's orbit, which takes longer than a year. The fastest version takes 14 months.

Of course if you use still more fuel, you can get there faster. The online pork chop plotter is helpful here. For L4 or L5 bring up "Earth" on the menu and then switch to "Custom" and change the MJD field by 1/6 year (61 days). For instance you get: 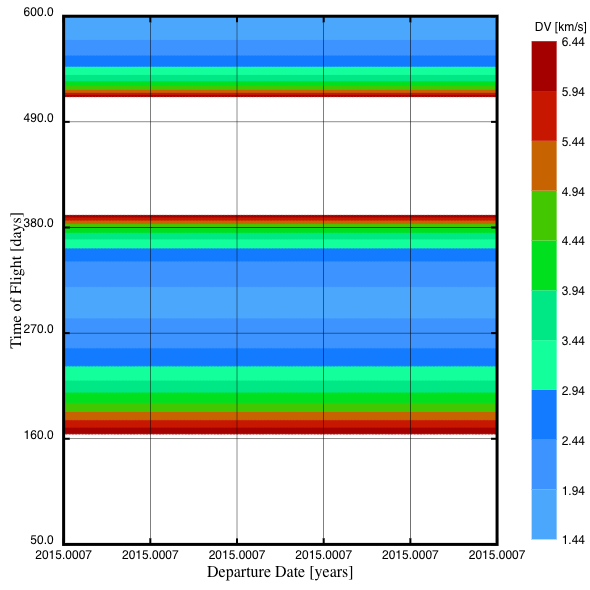 This finally leaves the question of how much delta-V is feasible with current or near future technology. Of course it depends how much you want to spend. Various source suggest a delta-V of around 9 km/s for a fully refueled SpaceX Starship. Of that 3.2 km/s is needed to escape Earth (in theory you could replace some of that by refueling in elliptical orbit, but that means a lot more launches). Giving about 5.8 km/s for the trip to L4/L5. From the pork chop plot that suggests about 240 or 250 days. Of course that leaves no more propellant for the return journey.

Not the answer you're looking for? Browse other questions tagged crewed-spaceflight time-of-flight or ask your own question.

4
Do we have the capability to place a satellite in the Sun-Earth L4/L5 Lagrange points?

5
Could steam be used as a efficient power source for a space craft?
12
Mass of food per astronaut per year for an extended deep space excursion?
3
Manned exploration or Colonization of Ceres — Any studies
1
Looking for figures for contemporary interstellar engine options
4
Ion Drives specific impulse somewhat of a false economy?
7
How many current or near-future pressure suits are there for use in space in total?