What happens to Insight's parachute on Mars?

I'm pretty sure it will be like the Phoenix lander. Collectively that part of the lander is referred to as the "Backshell". This is the image of Phoenix of the hardware on the surface. 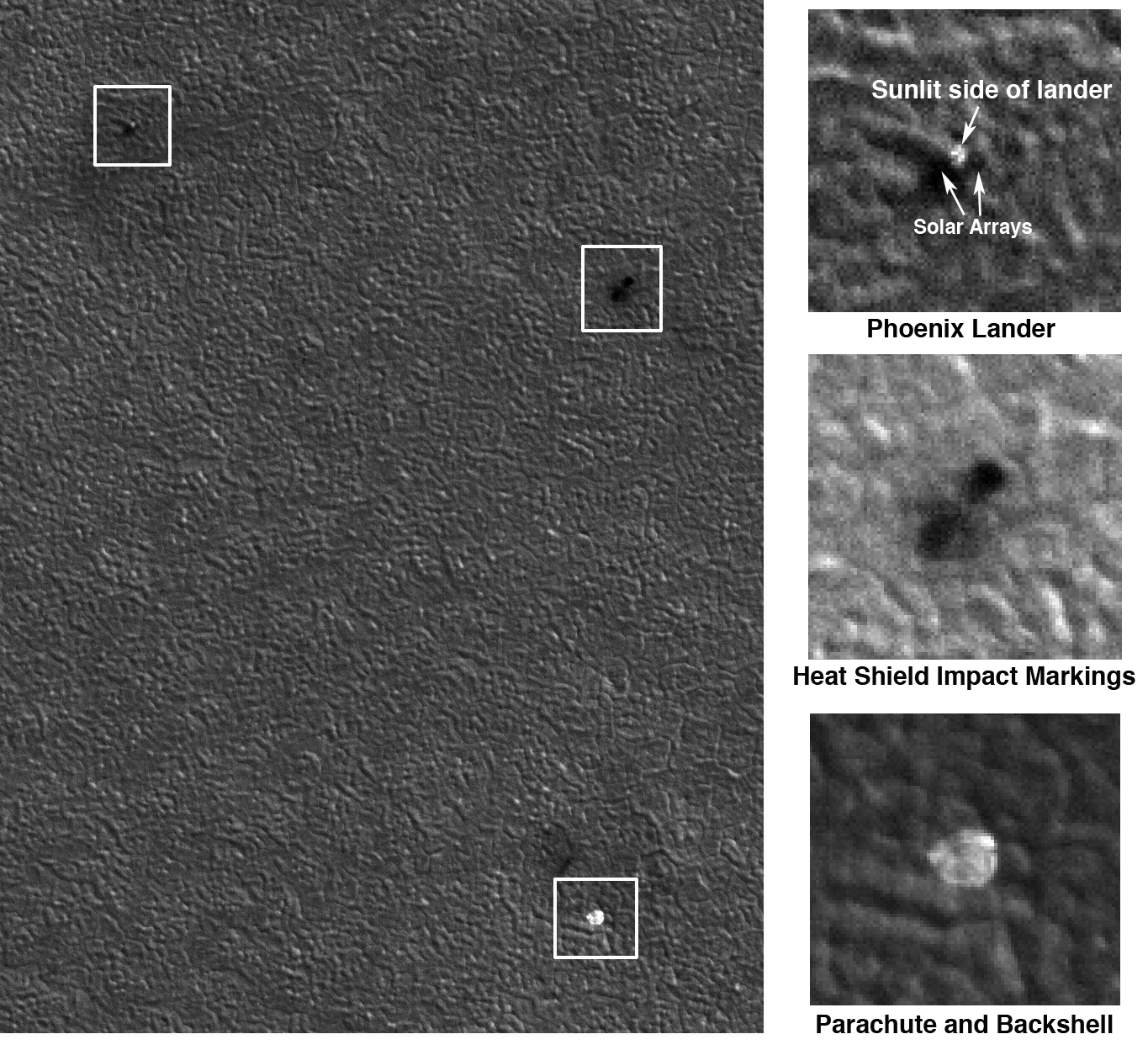 This is mentioned in the official timeline.

Powered Descent - Once the lander separates from its backshell and parachute, 12 descent engines on the lander begin firing and the onboard guidance software slows down the spacecraft until touchdown.

During the parachute descent, InSight's trajectory is at an angle to the vertical. After the backshell and parachute separate, the engines fire, leveling the craft. This allows some horizontal separation between the parachute and the craft:

20 seconds later — Separation from the back shell and parachute

2.5 seconds later — Start of the "gravity turn" to get the lander into the proper orientation for landing

22 seconds later — InSight begins slowing to a constant velocity (from 17 mph to a constant 5 mph, or from 27 kph to 8 kph) for its soft landing

12:01 p.m. PST (3:01 p.m. EST) — "Beep" from InSight's X-band radio directly back to Earth, indicating InSight is alive and functioning on the surface of Mars

InSight controllers have been receiving daily weather updates of the Elysium Planitia landing site from NASA’s Mars Reconnaissance Orbiter – allowing controllers the chance to upload last-minute tweaks to the timing of InSight’s parachute deployment and activation of its landing radar system to account for landing-day weather characteristics.

Of note, InSight was also designed to be able to land during a Martian dust storm – something it will not be required to do Monday but was nonetheless baked into the craft’s design given that, once launched, the science platform’s landing date and time were fixed and could not be postponed.

Here is the latest photo: 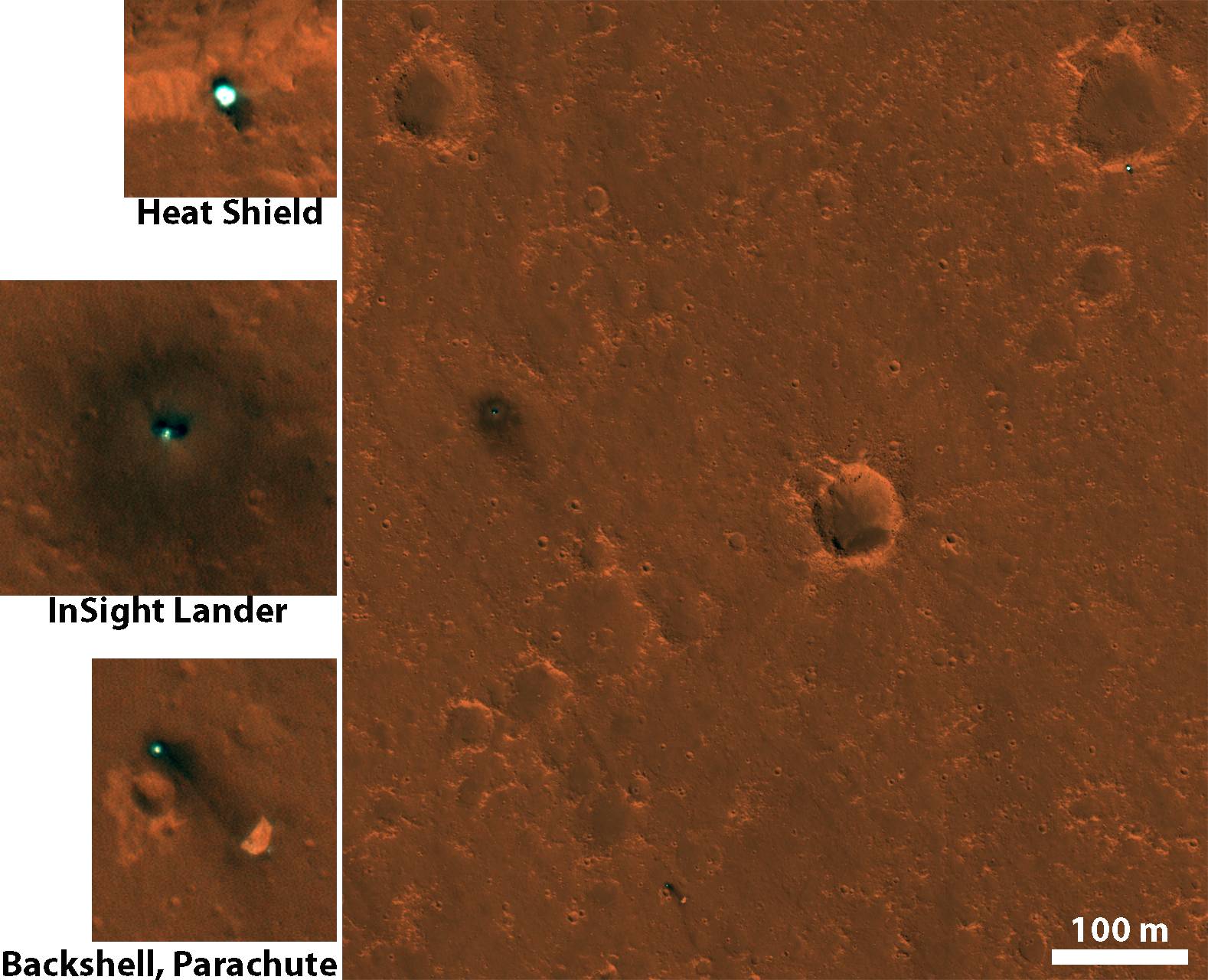 Everything landed with excellent separation. The heat shield is upper right corner of the larger photo, the parachute and backshell bottom left of center and the lander is middle left side.

Answer prior to last edit:

An explanation of the landing and a comparison with Phoenix is available at NASA's Insight Entry, Descent and Landing webpage, but it doesn't answer your question as clearly as NASA's LiveStream video of Insight's landing at 13:18.

At an altitude of one mile the lander falls away from the back-shell and lights it's engines, then it rotates away so the back-shell doesn't come down and hit it.

The failed landing of the ESA Schiaparelli is shown on the JPL webpage: "PIA21131: Closer Look at Schiaparelli Impact Site on Mars - "the parachute deployed as planned but was released (with back shell) prematurely, and the lander hit the ground at a velocity of more than 180 miles per hour (more than 300 kilometers per hour)".

Despite coming in far too quickly there is excellent separation between the pieces as shown in this photo (click to zoom): 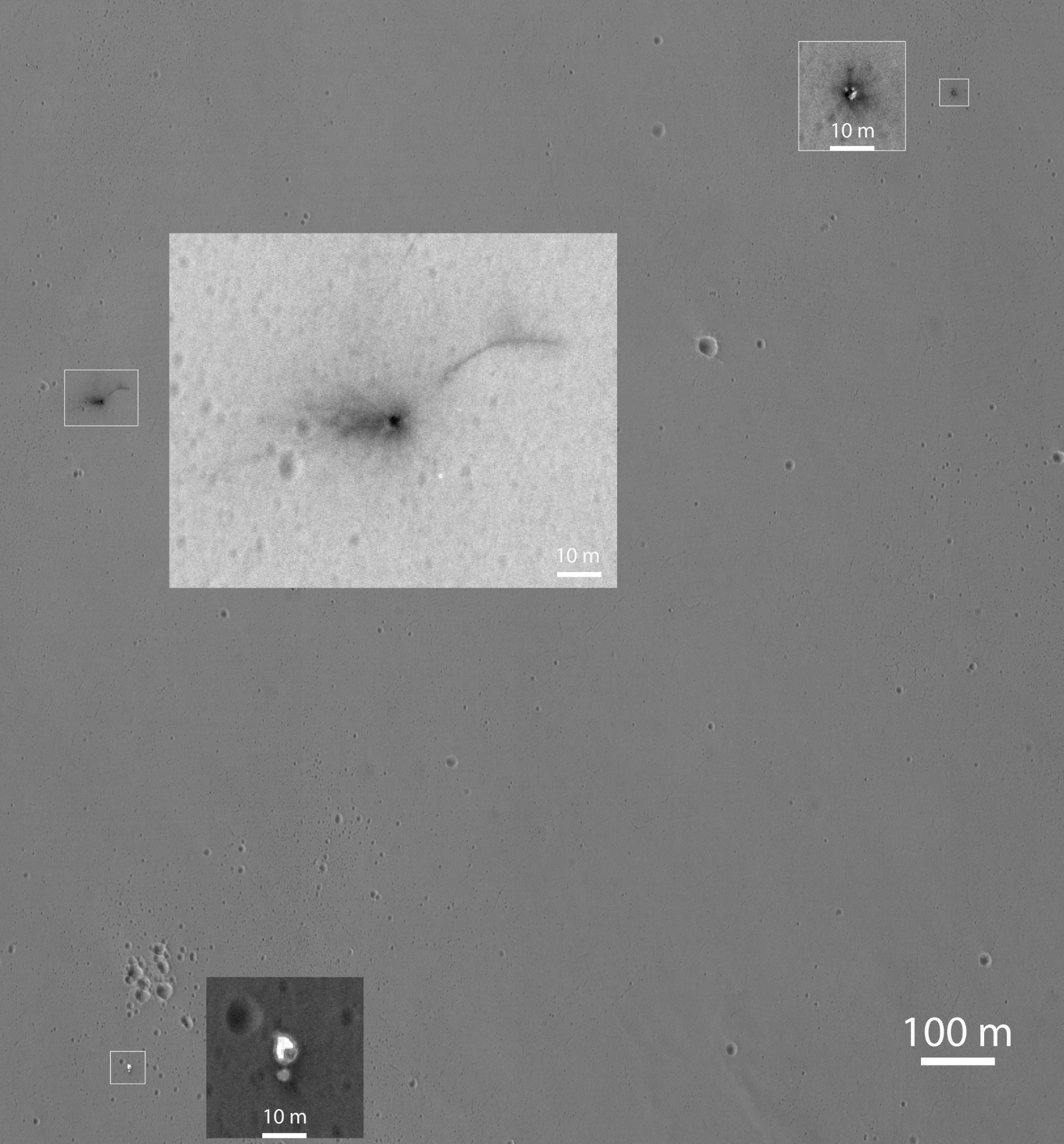 "At lower left is the parachute, adjacent to the back shell, which was its attachment point on the spacecraft. The parachute is much brighter than the Martian surface in this region. The smaller circular feature just south of the bright parachute is about the same size and shape as the back shell, (diameter of 7.9 feet or 2.4 meters).

At upper right are several bright features surrounded by dark radial impact patterns, located about where the heat shield was expected to impact. The bright spots may be part of the heat shield, such as insulation material, or gleaming reflections of the afternoon sunlight.".

Since the Insight lander was able to send back a test photo I conclude that the heat shield did not strike it and it wasn't covered by the parachute. A photo of the landing site from HiRes may be forthcoming.

Not the answer you're looking for? Browse other questions tagged mars nasa insight parachute entry-descent-landing or ask your own question.

4
Why would InSight's arrival date at Mars be fixed, and independent of the launch date?
20
Why can't you just parachute down right from orbit?
6
How could InSight's seismometers be intentionally and meaningfully "pinged"?
9
Why is InSight's nylon parachute a "soft good"?
4
How do Mars spacecraft control attitude on final descent and landing?
3
Why was MarCO-B CubeSats flying away after InSight landed?
4
What is InSight's one-sol energy budget on a good day?
5
How do Crew Dragon's main parachutes deploy?
0
Are there diagrams, animations, or even actual photographs of the very first "underground cable" on Mars?