Could dusters be installed on solar panels on a mars lander? [duplicate]

I see on the interwebs that the lander Insight is about to land on Mars and the NASA PR describes the solar panels as producing 600-700W now and 200-300W when covered in dust.

I like the mental image of a robot arm with a feather duster but there are probably more practical solutions.

Could dusters be installed on solar panels on a Mars lander?

Dust removal systems must meet stringent requirements, as must anything that goes into space. There are size, weight, power efficiency, ruggedness and reliability considerations and NASA doesn't use the same type of solar panels as are used on Earth.

It's easier to do initial trials on Earth with conventional panels, but the results must be retested on the same type of panels under similar conditions to what they would face on Mars - all that testing takes many years.

"Prototype EDS-integrated solar collectors including second-surface glass mirrors, metallized acrylic film mirrors, and dielectric mirrors, were produced and tested in an environmental test chambers simulating desert atmospheres. The test results show that frequent removal of dust layer can maintain the specular reflectivity of the mirrors above 90% under dust deposition at a rate ranging from 0 to 10 g/m2, with particle size varying from 1 to 50 μm in diameter. The energy required for removing the dust layer from the solar was less than 10 Wh/m2 per cleaning cycle. EDS based cleaning could therefore be automated and performed as frequently as needed to maintain reflection efficiency above 90% and thus reducing water usage for cleaning mirrors in the solar field. A comparative cost analysis was performed between EDS and deluge water based cleaning that shows the EDS method is commercially viable and would meet water conservation needs.". 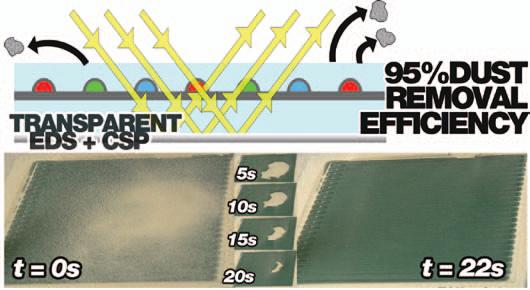 Developed at Boston University the "Electrodynamic dust removal would not require water and could be operated as frequently as needed at a miniscule cost. The BU team is now one step closer toward achieving its goal after the U.S. Department of Energy (DOE) Office of Energy Efficiency and Renewable Energy and the Massachusetts Clean Energy Center (MassCEC) awarded grants to support this research. The DOE will provide \$955,340 for solar mirrors for photothermal energy conversion while MassCEC will give another \$40,000 that will be used toward developing self-cleaning photovoltaic solar panels."

Robotic and electrostatic methods appear to be the two most promising avenues for self-cleaning of desert solar power systems, but the technology is developing all the time and several projects are still very much in development. Applications for use in space remain a number of years away.

Not the answer you're looking for? Browse other questions tagged solar-power insight or ask your own question.

21
Brushing clean a Mars lander's solar panels
20
Curiosity is still dirty! How will the ExoMARS Rover keep its solar panels dust-free and collecting sufficient power?
6
Is InSight capable of cleaning itself?
3
Is vibration useful in shaking off Mars dust?

6
Solar panels on Mars?
18
Can ISS fold its solar panels?
18
What inspired the circular panels on the Phoenix Lander and InSight rover?
10
Why the MASCOT lander has no solar panels?
6
Is InSight capable of cleaning itself?
21
Brushing clean a Mars lander's solar panels
2
Will the Rosalind Franklin (ExoMars) rover solar panels be able to clear themselves of dust by tilting?
13
Do space solar panels use more of the solar spectrum?
3
Plot of the thermally-induced tilt in Martian surface during solar eclipse by Phobos? (slope of 1 atom per meter?)