What are the advantages of a Molniya orbit over a tundra orbit?

Given this, if someone only wanted coverage over a specific longitude (and not full-earth coverage), why would they choose a Molniya orbit over a tundra orbit? Is it simply to avoid the extra boosting that's needed to lift a satellite to the higher tundra orbit?

The primary purpose of space exploration has always been militaristic (and this applies to every space faring nation, not just the USSR / Russia). To think otherwise is naive.

if someone only wanted coverage over a specific longitude (and not full-earth coverage), why would they choose a Molniya orbit over a tundra orbit?

Is it simply to avoid the extra boosting that's needed to lift a satellite to the higher tundra orbit?

That would definitely factor into it, though in my limited experiences of launch acquisition in the past if you're considering a rocket big enough to get to a Molniya orbit, the difference in price for the additional fuel for a Tundra orbit isn't terribly significant. There are some generalizations you can make about spacecraft, but in large part satellites (electronics in space) and their missions are all about the details, so here are a few that might affect a choice between these two orbits.

One great example of a Tundra orbit making more sense is with one of Sirius's old constellations. They used 3 spacecraft operating ~120 degrees out of phase (in both RAAN and mean anomaly) to cover North America continuously. The high apogee of a Tundra orbit will give you lower resultant signal power, but you'll both have clearer line of sight to a larger audience (the satellites will appear higher from the horizon for a larger population) and a longer dwell time above that audience. The following picture shows what the Sirius satellite constellation would have looked like: it's very neat to see the way each satellite sorta "tags in" the next satellite when their path's cross - high five!

this leads to the next point regarding coverage...

Molniya orbits will track over a difference set of regions on the Earth than a Tundra orbit would. The following picture shows a great example of the difference ground tracks a Molniya orbit makes vs. a Tundra orbit over a similar time period. If you're SiriusXM and you don't serve any Russian broadcasts, then it wouldn't make sense to spend half of your time away from the US - conversely if you're the KGB and you want to know everything that's going on over the US daily, it might be difficult to install a ground station in South America to support a Tundra orbit. 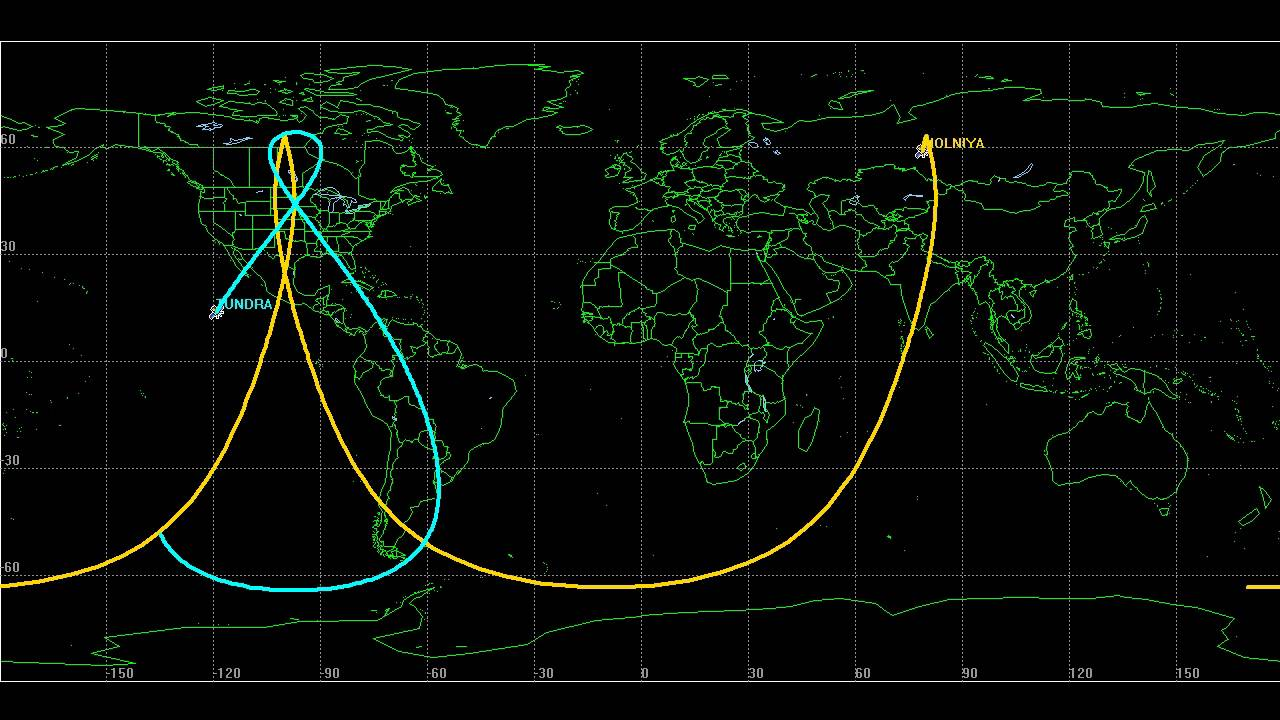 With any given remote sensing mission, typically the characteristics of the data acquired will differ as the satellite moves through the orbit: if you're at your apogee objects will look smaller, but you'll be see more objects - the opposite is true at perigee. You might care about both sets of data, but the time required to acquire a complete set of data in a Tundra orbit vs. a Molniya orbit is longer (Molniya orbits would necessarily do so in half the time). Additionally whichever data set is collected, if you're Russia/US and can't easily get permission to install a ground station in a foreign country (it's difficult, especially for defense/military missions) getting that data to a ground station in the Russia/US is faster in a Molniya orbit.

Not the answer you're looking for? Browse other questions tagged orbit molniya or ask your own question.

6
Difference between Tundra and Molniya orbits?

14
Are Molniya orbits used apart from Russian communication satellites?
15
Has a solar sail been used on an orbital mission?
10
How much “wobble” does a typical geostationary satellite experience?
3
What is the large structure in the background of this picture of Molniya 1?
5
How do multiple satellites deployed in the same launch reach their different final orbits?
6
Difference between Tundra and Molniya orbits?
4
How stable is an orbit of 335.9 km?
24
Why use a retrograde orbit?
5
Do I have enough info to find the true anomaly of an orbit?