NASA's Deep Space Network activity can be viewed conveniently at https://eyes.nasa.gov/dsn/dsn.html but if you would like data in a more raw XML form, it can be accessed as described in this answer

edit: per request, the example XML there is https://eyes.nasa.gov/dsn/data/1365107113.xml but they are issued frequently. Here's a screenshot indicating what a bit of one looks like demonstrating that frequency is in different units in different places: 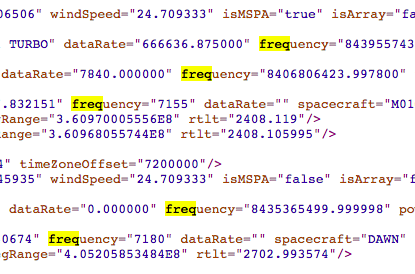 As discussed in this answer and in comments below it, the units in the XML data need to be understood, as they are not reported within the XML itself. Even though each XML carries of order 10,000 characters with lots of repetition, it doesn't self-report its own units.

In the case of frequency, the downlink values are in MHz while the uplink values are in Hz as shown in this answer. But that is just a guess because I believe that frequency values of 7150 and 8.4E+09 for a direct link from the Curiosity Rover to a DSN 70 meter dish have got to be standard X-band deep space frequencies. But I have no authoritative source for the units beyond guesswork.

And also, what about power? How can I know for sure if the uplink and downlink power expressed in the XML files are referenced to 1 mW or 1 W (for example dBm, vs dbW) or straight kiloWatts? With an uplink power value of 20 and downlink of -160, I'd guess that those are linear kiloWatts up and dBm or dbW down since 20 kW is a common DSN maximum power and I have seen numbers like -150 dBm from deep space before.

But I have no source for that, yet. 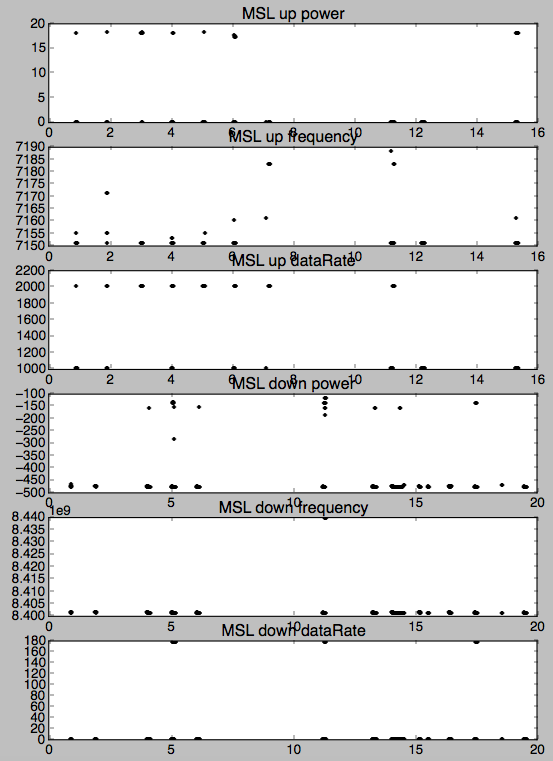 The XML shows downlink frequencies as a high-precision number in Hz and uplink as a round number in MHz. It's not stated explicitly in the XML, but that's the pattern. There's some logic to that choice:

Not the answer you're looking for? Browse other questions tagged nasa radio-communication deep-space-network raw-data or ask your own question.

18
Has DSS-43 ever been used in high power mode (>>20 kW) for an emergency situation?
9
Is there any publicly available logging, or "Wayback Machine" for DSN Now activity?
4
Understanding the information contained in the Deep Space Network XML data?
4
Has the Curiosity rover ever communicated directly with Earth via its high-gain antenna? Signal strength & data rate?
6
Does NASA's Deep Space Network sometimes listen to other space agencies' spacecraft "just for the heck of it" or other non-mission related reasons?
1
What is the highest non-optical frequency used or tested for use in deep space communication?