Was the Doppler shift of InSight's “tone” measured and plotted somewhere?

I watched a YouTube live broadcast from the InSight mission control area and saw lots of images of happy people cheering and jumping up and down, which is great! If it wasn't 4 AM where I was I might have as well.

Being the nerd though, I'd hoped for a view of some big screen showing a 2D histogram of frequency versus time, showing those little dots move to higher and higher frequency as InSight's dataless tone became less and less Doppler shifted.

From Why will radioastronomy telescopes be used to listen to InSight's entry into Mars' atmosphere instead of DSN?:

As the InSight lander descends into Mars' atmosphere, it will broadcast simple radio signals called "tones" back to Earth. Engineers will be tuning in from two locations: the National Science Foundation's Green Bank Observatory in Green Bank, West Virginia and the Max Planck Institute for Radio Astronomy's facility at Effelsberg, Germany. Their results will be relayed to Mission Control at JPL.

These tones don't reveal much information, but radio engineers can interpret them to track key events during InSight's entry, descent and landing (EDL). For example, when InSight deploys its parachute, a shift in velocity changes the frequency of the signal. This is caused by what's called the Doppler effect, which is the same thing that occurs when you hear a siren change in pitch as an ambulance goes by. Looking for signals like these will allow the team to know how InSight's EDL is progressing.

Question: Was InSight's tone captured by Max Planck or Green Bank? Did the signal get plotted somewhere?

Below: Example of a 2D histogram for the ExoMars Schiaparelli Lander, Schiaparelli’s UHF Signal captured by GMRT prior to Entry – Photo: ESA Data was received from the Giant Metre Wave Telescope in India. See Was the time of Schiaparelli's landing chosen specifically so the Giant Meter Wave Radiotelescope could listen? 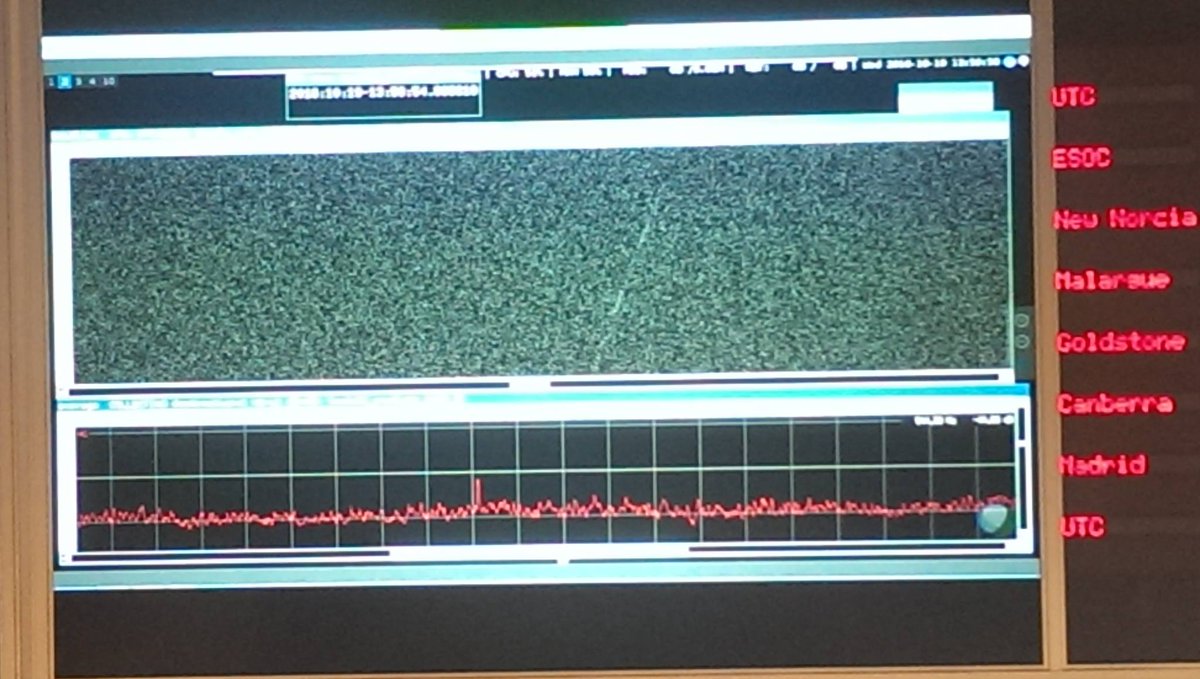 Browse other questions tagged radio-telescope delay-doppler doppler-ranging green-bank-observatory or ask your own question.

11
Is there independent evidence that China landed a robot on Mars in May 2021?
4
Was the time of Schiaparelli's landing chosen specifically so the Giant Meter Wave Radiotelescope could listen?
2
Why will radioastronomy telescopes be used to listen to InSight's entry into Mars' atmosphere instead of DSN?
2
When NASA spacecraft arrive at Mars, is Mars always always above the horizon in the US?
1
How long did the plasma blackouts of Perseverance's signals to MRO and direct-to-Earth last during its seven minutes of terror?

9
Why was the 100m Green Bank dish needed together with DSN's 70m Goldstone dish to detect Chandrayaan-1 in lunar orbit?
5
How does a three-way doppler shift measurement work?
6
Why such a large observed doppler shift from Apollo 17 orbiting the moon?
2
Why will radioastronomy telescopes be used to listen to InSight's entry into Mars' atmosphere instead of DSN?
2
How will InSight's RISE antennas end up pointed in the right direction?
5
From whence (what ground stations) do the world's major space agencies receive signals from their missions?
8
What are the pros and cons of Doppler radar versus Doppler lidar?
4
Why are deep space “beacons” usually UHF, so low (in freq) that DSN can't hear them? And how unusual is it for a Mars lander to have an X-band beacon?