Can Curiosity pay InSight a visit?

InSight landed “just” 600 kilometers from Curiosity’s landing site. Can Curiosity make its way there for a rendezvous? Are there any plans for this?

Curiosity took 3 years to travel 10 km. There are no plans to visit InSight, Curiosity's mission is to survey Gale Crater and climb Mount Sharp.

Curiosity can travel on the order of 100 m/day. At that rate it would take 20 years to get to InSight. The RTG can provide enough power for about 14 years. The wheels are rated for ~40 km depending on the terrain.

Curiosity can only drive for a few hours per day: driving takes 500 W and the RTG only produces 100W, so it has to stop regularly to recharge its batteries.

tl;dr: I think it is possible, if Matt Damon's life depended on it.

@Hobbes's answer is certainly the most reasonable view and likely to be true. But let's look at this from the standpoint of absolute limits.

this answer says in part:

Curiosity... has a rated travel speed of 200 meters per day, but this is mainly due to navigation restrictions rather than power limitations. Improved techniques might be able to get it up to its rated driving speed of 90 meters per hour, and since the rover's RTG operates just fine at night (unlike Opportunity's solar panels), continuous driving might be possible. In this case, it would take about 1200 days for Curiosity to reach Spirit, assuming it didn't need to detour around any major obstacles. This is, of course, assuming that the wheels don't wear out.

The rover has a top speed on flat hard ground of 5 centimeters (2 inches) per second. However, in order to ensure a safe drive, the rover is equipped with hazard avoidance software that causes the rover to stop and reassess its location every few seconds. So, over time, the vehicle achieves an average speed of 1 centimeter per second. The rover is programmed to drive for roughly 10 seconds, then stop to observe and understand the terrain it has driven into for 20 seconds, before moving safely onward for another 10 seconds.

Based on variables including power levels, terrain difficulty, slippage and visibility, the maximum terrain-traverse speed is estimated to be 200 m (660 ft) per day by automatic navigation. The rover landed about 10 km (6.2 mi) from the base of Mount Sharp,(officially named Aeolis Mons) and it is expected to traverse a minimum of 19 km (12 mi) during its primary two-year mission. It can travel up to 90 m (300 ft) per hour but average speed is about 30 m (98 ft) per hour.

I'll look at these two values to try to bracket the optimistic range, ignoring the reality that terrain avoidance and navigation issues would require a path much longer and slower.

@Hobbes has just reminded me that the RTG's power output is much lower than needed for driving, so just like our friend Matt Damon, it's necessary to charge a lot and drive a bit and charge a lot more. I'll ballpark it at 2 hours of driving per day.

There is in deed plenty of life in the RTG, and if Matt Damon's life depended on it, it is certainly conceivable that they'd try for it in the movies.

@Hobbes' other answer at least has faith in curiosity's grade-climbing capabilities.

But in the movies, curiosity's wheels would hold out. And that may not be the case in reality.

The question Curiosity wheel damage and its several answers point out that the wear rate of Curiosity's wheels is an issue partly because they are made from thin titanium aluminum and rocks are sharp. A 600 km (minimum, it would likely be longer in total) drive would probably tax these wheels beyond their maximum. Between the wheels and all of the other systems, the chance for mechanical failure is great.

Pu238 has a half-life of about 88 years; even in 10 years that only represents a loss of 8% in thermal power. However, thermoelectric power may suffer worse, the solid state devices may degrade over time.

On the flip side though, Spirit an Opportunity put on quite a durability show, lasting of the order of a decade and going tens of kilometers. Considering that Curiosity's engineering builds on that experience, it's impossible to say that this trip is impossible.

0.75 mm titanium aluminum is susceptible to damage by some of Mars' more pointy rocks.

See Why are Curiosity's wheels aluminum rather than titanium? 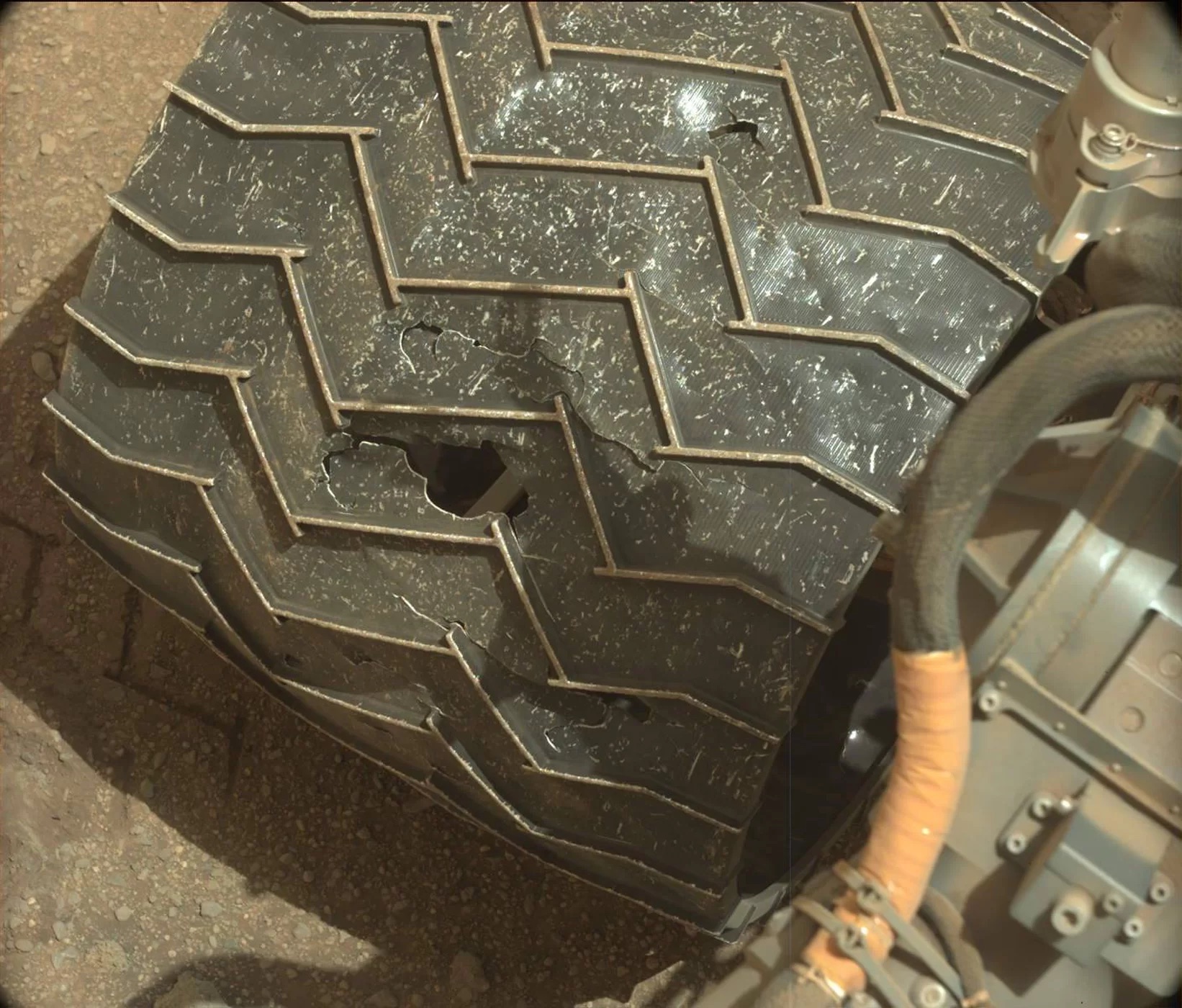 It is possible, as uhoh demonstrated, to go the distance between the two, although it would take a long time. But the terrain makes that somewhat unlikely. I've pulled the elevation map, the yellow marker is where Curiosity is, the red circle is roughly where InSight is (I couldn't get a better location, unfortunately)

The first obstacle that Curiosity would have to tackle is getting out of Gale Crater. It is close to one of the flatter exit ramps, but still, it wouldn't be easy. 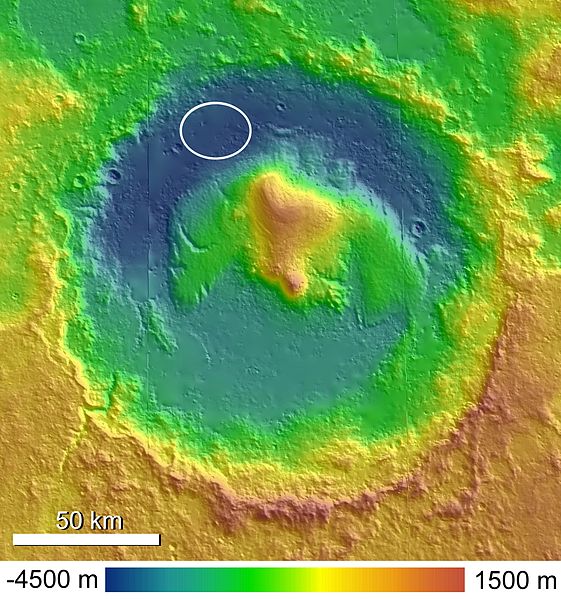 Once it leaves Gale Crater it is in a reasonable flat area, and could probably safely make most of the trip. The danger, however, is the area where InSight is itself. The area was deliberately chosen to be dusty, to make putting the drill in to the surface of Mars easier then hard rock. That is poor conditions for driving, and could result in it getting stuck.

The biggest reason, however, is that there just isn't a good reason for Curiosity to visit InSight. Gale Crater is a fantastic area to explore, and InSight will already have its site explored quite carefully by that time, no reason to waste a billion dollar rover to study an area that is already studied.

Not the answer you're looking for? Browse other questions tagged mars curiosity insight or ask your own question.

28
Can either Opportunity or Curiosity explore the state of Spirit?
18
How much can the Mars rover Curiosity do autonomously, after four years of operation?
18
Why are Curiosity's wheels aluminum rather than titanium?
14
If Curiosity had lights, could it drive or work in the evening?
10
Curiosity wheel damage
15
Does the Curiosity rover really have a chance of driving to the top of Mt. Sharp?
2
Have any two rovers launched from different crafts functioned in visible distance of each other?

10
How will the NASA 2020 Mars rover's instrumentation differ from Curiosity?
15
Does the Curiosity rover really have a chance of driving to the top of Mt. Sharp?
5
Why would InSight's arrival date at Mars be fixed, and independent of the launch date?
19
Why is Curiosity not heading for Peace Vallis?
3
First interplanetary launch from California! How far from Earth will InSight be when it separates from the Centaur 2nd stage?
4
Has the Curiosity rover ever communicated directly with Earth via its high-gain antenna? Signal strength & data rate?
3
Why was MarCO-B CubeSats flying away after InSight landed?
4
Will the Mars 2020 rover's sensitivity to methane be better than Curiosity's?
7
Why did Curiosity not have a camera on board to record the landing?