How could a transmission be relayed wirelessly from the bottom of Europa ocean to Earth?

Answers to Do you need a “wire” on a Europa submarine to phone home? are generally yes, but a wire is cumbersome and dramatically limits range,

If a rover was sent to the bottom of Europa's Ocean and started to explore laterally as well, how might a signal be relayed wirelessly to the surface through water then ice and then to Earth? 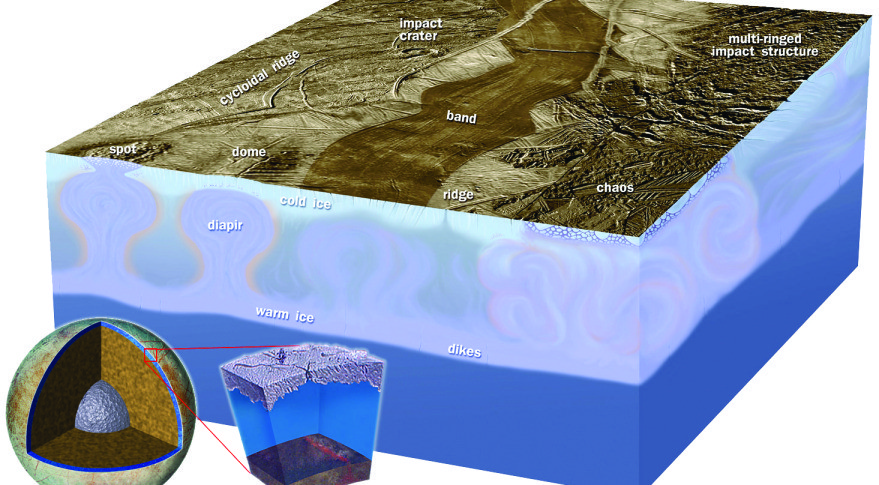 Could acoustic waves be used? There are problems in Earth's oceans as discussed in the other question, but Europa is a substantially different case, so it's possible the technology can be reexamined here.

Are there other possible approaches that can be considered as well?

Communications, and the data rates available, boil down to signal-to-noise ratio (SNR): the power of the signal within a receiver's bandwidth divided by the noise power the receiver sees in that bandwidth. This is true regardless of whether the receiver is electromagnetic (radio, laser comm, etc.) or acoustic. Once you get an SNR higher than the threshold for establishing a link at all, the higher the SNR, the higher the data rate you can support.

Putting data into a comm link is accomplished via modulation, which is varying some characteristic of the wave (amplitude, frequency, phase, etc.) that the receiver can discern. Various modulation schemes and data encoding schemes have different link thresholds. If you're trying to communicate in an environment that poses severe challenges to the SNR, then you'd probably use a scheme with a low threshold.

OK, what challenges SNR? In space telecommunications the SNR is usually defined as the ratio Eb/No, where Eb is the total energy into the receiver per bit of data being transmitted, and No is the noise energy the receiver sees while that bit is being received. Both of those can have significant challenges.

If No were zero, then comm would be easy with very low signal power. But No is never zero; even the receiver itself, and its antenna (an acoustic system would call it a transducer or a "microphone"), generate some noise. In electromagnetic systems this self-generated noise is usually characterized by the "system noise temperature" and there are equivalents in acoustic systems. Of course the environment can generate noise as well. At Jupiter, various mechanisms generate copious amounts of electromagnetic signals: lightning in Jupiter's atmosphere, synchrotron radiation from the powerful radiation belts, etc. But all of these are at fairly high frequencies compared to the low frequencies you'd use for penetrating salt water or highly fractured ice. For such electromagnetic comm systems, the noise environment at Europa is probably not bad.

For acoustic systems, the noise environment could be really bad. Strong tidal flexing (also here) of the ice shell might make the environment something like trying to listen to the soft parts of Debussy's "Reverie" while someone in the same room is crushing ice in a blender! The cracking, shifting ice could make a huge amount of noise. But it depends somewhat on Europa's seismic style: does it crunch and crackle almost continuously with relatively small, local events, or does it let loose only occasionally with large events? We don't know. The first is very hard to design around, and usually drives the system to high power, which is a challenge I'll say more about later. The second can be handled by knowing that during the large event comm will be interrupted, and data sent during such an event can be retransmitted after the event is over. But since we don't know Europa's seismic style, we don't know yet what kind of system is required.

Received signal power is the other major factor. For acoustic systems, water—whether salty or not—is an excellent, low-loss conductor. Suspended solid particles can cause mildly increased absorption, but little suspended material is expected in Europa's ocean. Solid ice is also a good conductor. Highly fractured ice isn't quite so good, but for long wavelengths it's not a serious problem. Signal losses (absorption or scattering of a signal's energy, so the signal intensity is decreased) should not be bad for acoustic systems at Europa.

For electromagnetic systems, salt water is a huge challenge. Its electrical conductivity causes significant absorption of electromagnetic waves traveling through it, more for higher frequencies than for low frequencies. This is why the Navy comm systems for submarines use Extremely Low Frequency (ELF) waves, which necessarily yield very low data rates. And the saltier the water, the worse the signal absorption. Absorption is characterized by a loss, in logarithmic units (like decibels (dB) for engineers, optical depths for scientists) per distance. For instance, a loss of 3 dB (a factor of ~1/2) per km means that if a signal transmitted from a source, received 1 km away without any absorption, has an intensity x at the receiver, then with the absorption the intensity would be x/2, half as much. Another km of distance would cut the intensity to ~1/4 (another factor of ~1/2) of the no-loss value, and so on. If the comm distance is many km, then the signal intensity is cut to a tiny fraction of the no-loss value. This is why various types of comm system use repeaters, stations that receive a signal from a source, then retransmit it at higher power than received to the next repeater or the end receiver. Acoustic "pucks" would use the same approach.

Use of repeaters is where power concerns arise. A system using multiple repeaters can't afford the mass to have 100 kg repeaters, most of which would be expensive batteries (because the batteries must operate at very low temperatures) if they are operating at high power levels. The repeaters have to run on low power to keep their mostly-battery mass low, and that means the distance from one repeater to the next must be relatively short, and that means lots of repeaters, so we're still hit with a mass penalty. A cable would be much lighter—but see below!

Fractured ice can also be an impediment for radio signals, but like the acoustic signals, lower frequencies reduce the signal attenuation. Given that Europa's surface has non-ice constituents (interpreted as salts and maybe other species), the subsurface ice probably contains those as well, and they can cause radio absorption.

So for Eb/No concerns, acoustic has no inherent problem with Eb (due to good acoustic wave conduction characteristics), but probably has trouble with a large No—though we're not sure, due to not knowing what Europa's seismic style is. Radio has no problem with No, but has serious issues with Eb due to strong signal absorption in salt water and possibly in non-pure ice, neither of which are known to any reasonable accuracy.

By the way, cable has its issues too: if the ice is very mobile (lots of active faults and cracks) it can easily sever a cable.

This discussion—do we use radio, acoustic, or cable?—is ongoing in the planetary mission community, with no strong conclusions, understandable given the lack of data about the relevant environmental conditions.

I was recently on a team proposing experiments at Europa, and some of the team members were strongly endorsing the acoustic approach, with justification based on models of what Europa's ice shell might do. To me, until we have actual data, arguments based on models of ice shell behavior at temperatures far removed from our experience with earthly ice shells might as well try to justify their conclusions with: "Because footballs don't bounce straight." Personally, I think we need to start with a simple lander to measure the seismic style and ice conditions, then send a more complex lander on a subsequent mission with an ice-penetrating system to do subsurface exploration.

Not the answer you're looking for? Browse other questions tagged atmosphere technology data-transmission or ask your own question.

9
Do you need a “wire” on a Europa submarine to phone home?

2
What is the advantage of QPSK over FSK or ASK for satellite data transmission?
9
Do you need a “wire” on a Europa submarine to phone home?
9
Is it possible to extend high speed data transmission with lasers to the distance Earth to Mars?
3
How will the Parker Solar Probe's data transmission keep up with data gathering?
5
When scientific and engineering data are sent from space probes, are the signals repeated to minimize transmission error?
6
Could Mars ocean still be there?
4
How much energy from the Sun could we get if we use Jupiter or the Earth as an atmospheric lens?
1
Trying to understand if or how operating a rover on Mars from Earth could work