What are damper booms, and how do they facilitate triaxial stabilization?

I'd never heard of DODGE until I saw it mentioned this answer as the source of the first full color "full Earth" image. The spacecraft's primary function however was to experiment with gravity gradient stabilization for high orbits near GEO.

The DODGE (Department of Defense Gravity Experiment) satellite was orbited primarily to study a number of advanced biaxial and triaxial gravity-gradient stabilization techniques at near-synchronous altitudes. Secondary objectives included obtaining measurements of the earth's magnetic field at near-synchronous altitudes and black-and-white and color TV photography of the entire earth disk.

The satellite was in the form of an octagonal aluminum shell with a truncated pyramid at the top and a 25.4 cm-diameter cylindrical mast extending 1.57 m from the satellite base. The satellite body was 2.41 m long and 1.22 m in diameter. A total of 10 knobbed booms were carried on board. Upon radio command, these booms could be independently extended or retracted along three axes to various limits out to 45.75 m. The cylindrical mast housed a 4.6 m boom that extended through the end of the mast, two 15.25 m long damper booms that extended in the x-y plane, and triaxial vector magnetometer sensors. The remaining seven booms were contained in the satellite body along with a two-camera (one color and one black-and-white) vidicon camera system. The command system consisted of a dual command receiver, dual command logic, and power switching circuitry. The telemetry system included two directional antennas mounted on the mast, two 38-channel commutators for housekeeping data, and a dual transmitter system that transmitted analog data at a frequency of 240 MHz and TV data at 136.8 MHz.

The satellite was successfully stabilized 12 days after launch by means of the gravity-gradient booms and libration dampening systems. It was oriented with its base and mast directed toward the center of the earth's disk. The mission was a success and proved the feasibility of achieving triaxial gravity-gradient stabilization at synchronous altitudes using passive and semipassive techniques. The satellite operated for over 3 years and took thousands of black-and-white and color pictures of the earth. Early in 1971, problems with the batteries on board limited operation to only solar acquisition periods. The satellite was placed in an operational off mode in early 1971.

Question: What are damper booms, and how do the the "passive and semipassive techniques" to achieve triaxial gravity gradient stabilization work in this case?

Bonus points: How did a boom almost 46 meters long "get out of DODGE" by such a long distance? The cylinder itself is only about 1.6 meters long.

Passive damper booms dissipate energy internally so that oscillations around the stable orientation gradually damp down.

There are some interesting, if slightly dated NASA monographs about these:

How do they work? There are several types, but one is a long helical spring. Because the boom is attached to a large mass (the payload) at one end, the angular oscillations tend to cause a whipping motion in the spring that excite waves along the spring. Because the spring is (deliberately) imperfectly elastic, these waves are damped to heat and dissipate.

How does that stabilize the satellite? Imagine the satellite as a hand trying to excite a wave in a string by moving up and down. If energy is going into the string and being lost, the string is exerting a regarding (opposing) force on the hand. In the satellite case, that eventually reduces the satellite’s motion by extract all the kinetic energy in that mode.

More recently, dampers have been designed around other sources of energy loss including eddy currents and viscous flow losses. But the basic idea remains: couple satellite motion to a mode in the damper that can dissipate the energy until there’s none left.

Gravity stabilization is straight-forward for the two axes parallel to Earths surface (pitch and roll if you imagine the satellite as flying above Earth).

Fully passive stabilization along the third axis (yaw) is harder with just gravity gradient, because it relies on higher moments of the field. It can be done with sufficiently long booms, see below, but magnetic solutions are more effective, particularly for equatorial orbits. Basically, you magnetically couple e.g yaw and roll, then pull energy from roll to drive yaw+roll to zero. More formally, you’re using magnetic torque to change two axes with damping and one without to three different orthogonal axes that are all gravitationally damped.

For a fully gravitational approach, i.e if magnetic coupling isn’t available, you use the tendency of a body to rotate around the largest-moment axis as energy is reduced. I’m not quite sure how to explain it non-mathematically, but you’re basically spin-stabilizing the pitch axis at one-revolution-per-orbit, then doing gravitational damping of any precession around that.

You ever seen the long sticky outy things on a modern olympic compound bow? 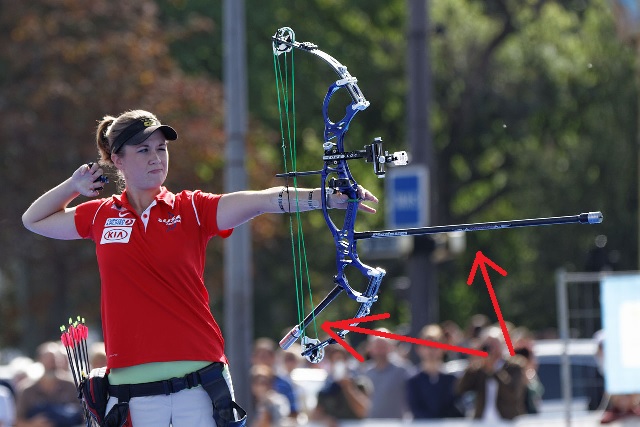 They stabilise the bow by providing additional rotational inertia. More torque is needed to change the bow's orientation than would be the case if they weren't there.

The damper booms provide a similar role for the DODGE satellite.

How does gravity gradient stabilisation work?

Objects in orbit with one heavy end tend to orient that end towards the gravity source. The effect stems from the slight difference in gravity over the length of the object. Out in geosynchronous orbit, that difference is very small. 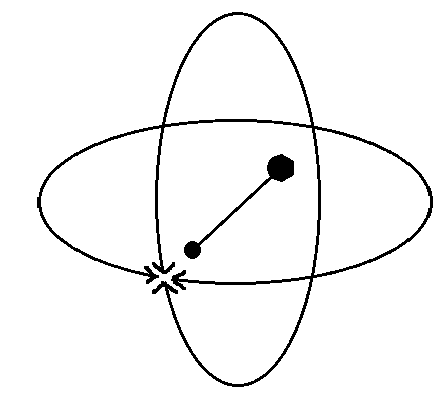 This stabilisation operates in two axes. I would call these Pitch and Yaw, but it looks like the original researchers referred to them as Pitch and Roll. I will continue to call them Pitch and Yaw because I can think of no other unambiguous way of referring to these three rotations. Pitch being an up-down (parallel to the pole) swaying, Yaw being a sideways (parallel to equator) swaying, and Roll being, well, a rolling motion.

It makes sense that pitch and yaw are stabilised by the gravity gradient, but what about the roll?

The answer is given in this question.

If the satellite were static in space, there would be no roll stabilisation. But the satellite is not static in space, it is orbiting around the earth once a day, which because of the other two axes of stabilisation means it is rotating once a day too. Just like how changing the direction of a spinning bike wheel is difficult, this once a day rotation is sufficient to stabilise the satellite against roll. Presumably this is what the extra damper booms are for - to provide extra rotational inertia perpendicular to the 'long axis' to increase the torque necessary to initiate a roll.

In this paper (pages 167-175) they do mention that this form of roll stabilisation is about a quarter as effective as the stabilisation in the other two axes. The DODGE satellite also contains a pair of magnetometers and electromagnets, which could be used to grant additional stabilisation using the Earth's magnetic field, and a flywheel.

As to how the main boom was able to extend, I couldn't find any information on that. However, if you consider extendable window brushes, the engineering doesn't look too difficult.

The longest telescoping window brushes I could find through a quick internet search are about 20 metres long, come in about 7-8 segments, and are designed to withstand gravity. The main boom on DODGE is 1.5 m retracted and 46 metres long extended (if I'm reading the info right), and doesn't have to withstand gravity, so can be made of thinner material. If this was the case, the boom would be made up of 30 individual telescoping pieces. 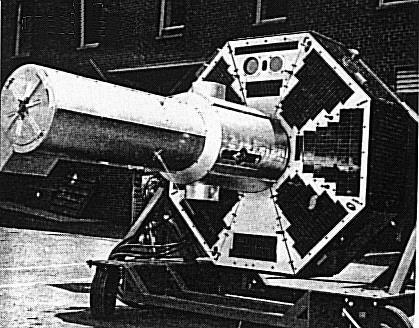 Not the answer you're looking for? Browse other questions tagged attitude-determination-and-control or ask your own question.

36
Was the “Earthrise” witnessed by Apollo 8 the first available “full” photo of the Earth?
6
How does gravity-gradient stabilization work?
4
Rotating in orbit?
3
Have magnetotorquers ever been used to spin-up a satellite?
4
3-axis gravity gradient stabilization?
2
How far would the ISS need to be to keep it's attitude with the earth from tidal forces without needing control moment gyroscopes?
1
Tidal locking of celestial bodies

2
What is a gyrocompass and how might one be used by a planetary rover?
2
Hubble's one-gyro mode; how does it work for attitude control, stabilization, and slewing?
1
How are New Shepard's tilting fins and gimbaling nozzle used together (or separately) to control the rocket?
4
What are “uncoupled attitude maneuvers” and why do them?