Is the ESA Roscosmos ExoMars Orbiter capable of detecting the NASA landers and rovers on the surface of Mars?

I know that ExoMars is controlled jointly by ESA and Roscosmos not by NASA. Is this satellite (the Trace Gas Orbiter, placed in a near-circular 400 km altitude orbit, capable of detecting the American landers and rovers existent on the surface of Mars? 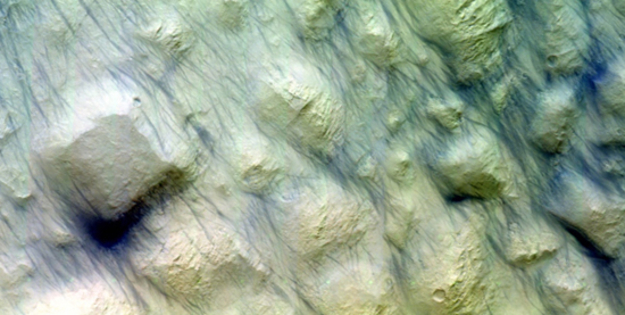 The CaSSIS imager on board ExoMars's Trace Gas Orbiter has a resolution from its ~400km orbit of around 4.6m/pixel. This means that it might be possible to identify a single dark pixel against the background if you already knew exactly where it was.

Compare this to HiRISE on board NASA's MRO which has a resolution of ~0.3m/pixel. It has taken images of landers and rovers such as Opportunity which are barely identifiable.

tl;dr: Yes it's possible, but it would be a challenge.

I am pretty sure that in time, 4.6 meter/pixel imaging (from @simplex1's answer) could find InSight. It might take a while and a lot of work though.

I remember reading about this possibility in another answer about an object on the Moon. I can't find it right now but I'll add a link when I do.

Wikipedia has InSIght at 6 x 1.56 x 1 meters, near 4.5°N 135.0°E. That means InSight's dark shadow will oscillate North/South a little bit seasonally, and by many meters between noon and sunset or sunrise. Shadow modulation can certainly help in detection if enough images are available for a systematic study.

This would show up as a fraction of a pixel motion in the centroid, but if a good sunset-sunrise shadow were available, the 1.3 pixel dark blob could extent do 2 pixels or more.

But the key is not that you can measure size, but that you can see a systematic increase in darkening of say a 3x6 pixel area. This wouldn't necessarily jump out at you, but with careful image processing it's probably identifiable. This is helped by the area being fairly boulder-free as required by the lander's careful site-selection process.

The panels are fairly flat and will have some fairly directed reflectivity. A carefully planned orbit might take the spacecraft through a calculated flare cone. Images spaced closely in time would show a few pixel area change brightness suddenly and predictably. 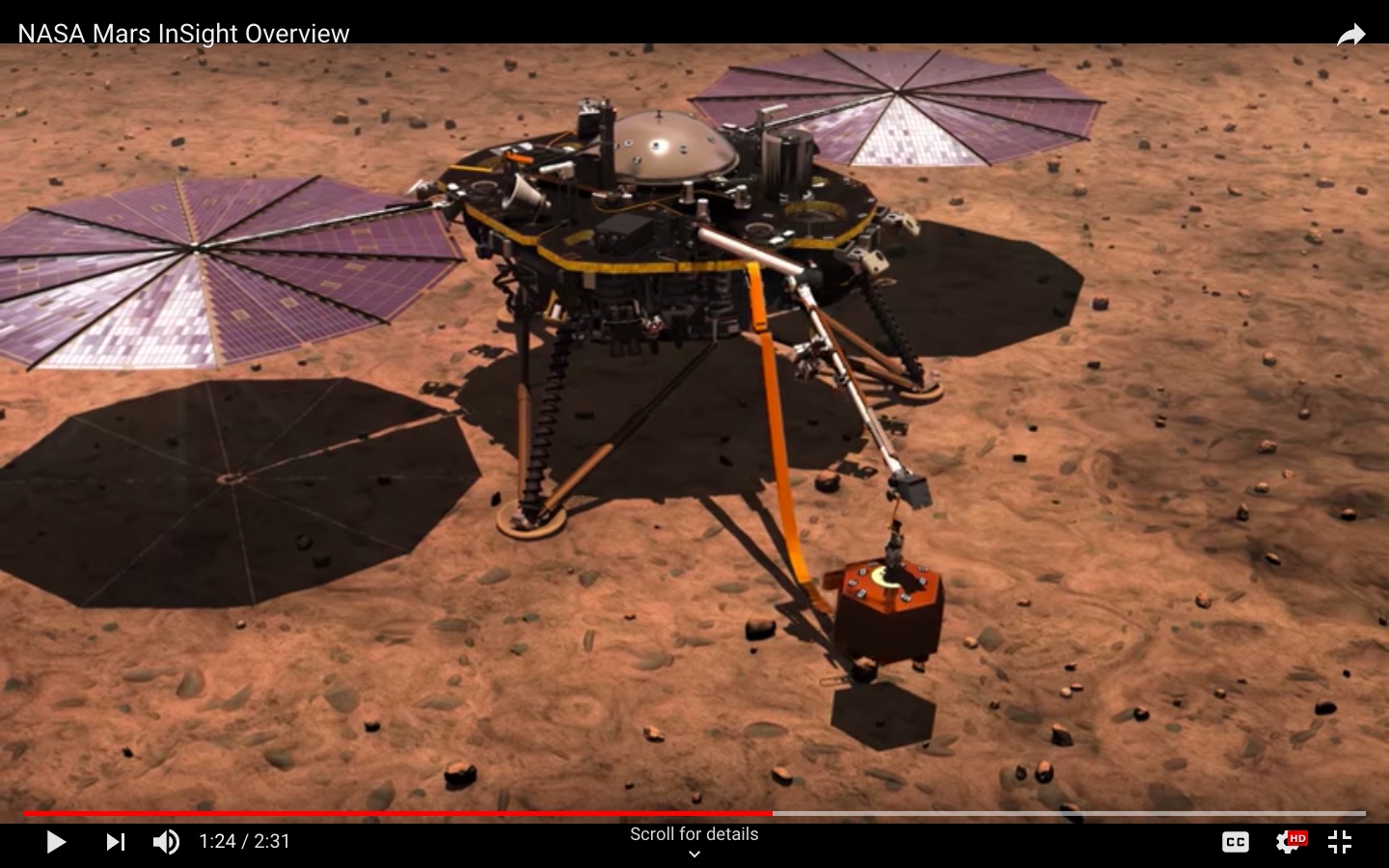 Talk about Satellite flare! As an example, these are saturated clusters of pixels in MRO images of InSight helping to confirm its exact location. See also JPL's page for image PIA22875.

below: From Space.com's NASA's Insight Lander on Mars Spotted from Space! "NASA's InSight lander and associated hardware, as seen by the HiRISE camera aboard NASA's Mars Reconnaissance Orbiter. In the large main photo, the lander is at left-center, the parachute and backshell at the bottom and the heat shield at upper right." Credit: NASA/JPL-Caltech/University of Arizona

"It looks like the heat shield (upper right) has its dark outside facing down, since it is so bright (saturated, probably a specular reflection)," HiRISE principal investigator Alfred McEwen, of the University of Arizona, wrote in an image description today (Dec. 13).

"The lander (middle) disturbed dust over a fair distance and has darkened the surface, as seen previously at the Phoenix and Curiosity landing sites," McEwen added, referring to the touchdowns of NASA's Phoenix lander and Curiosity rover in May 2008 and August 2012, respectively. "The bright spot associated with the lander is probably another specular reflection, and there are two smaller bluish extensions that are the solar arrays, plus their shadows." 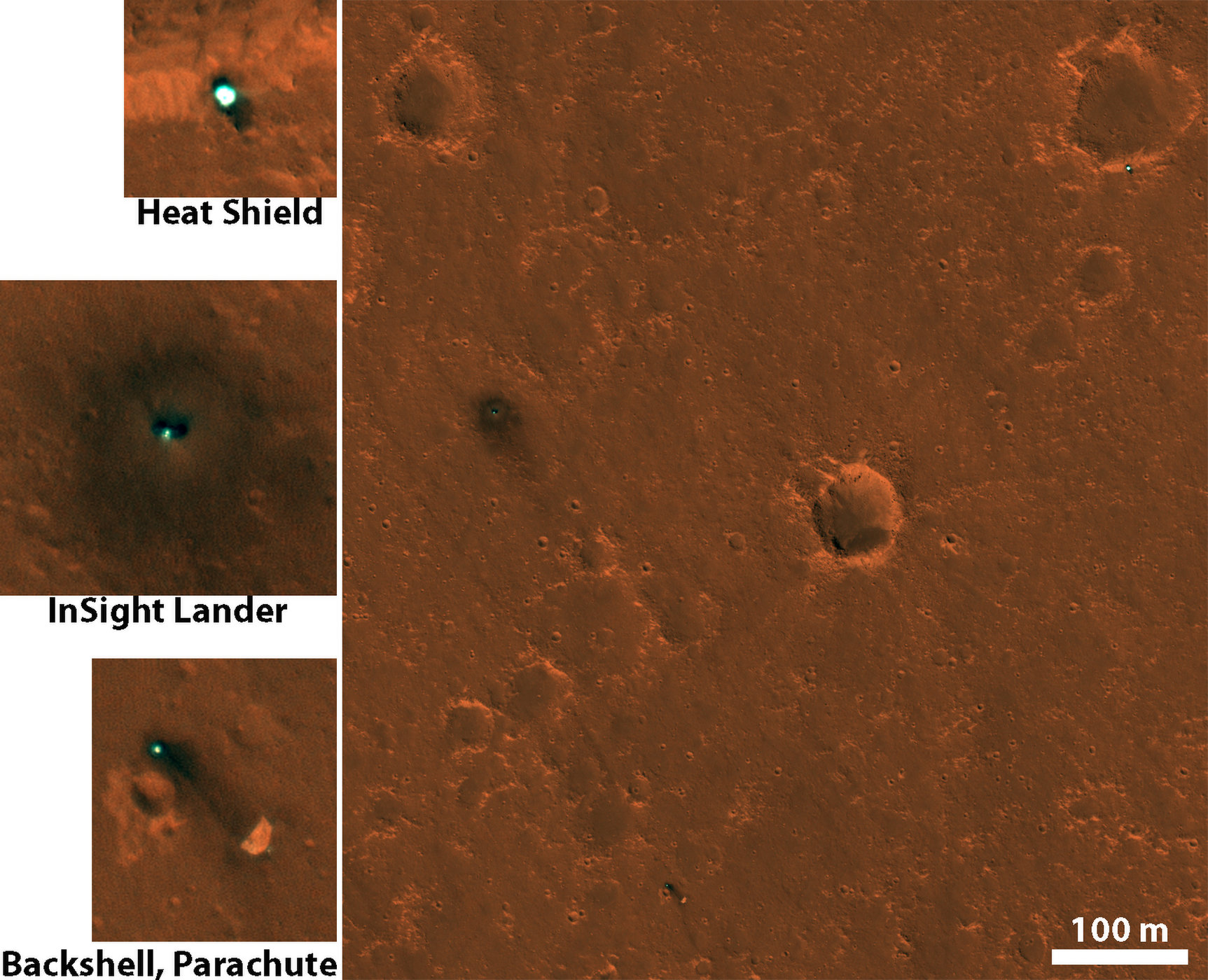 Further detail from Gizmodo.com's Martian Satellite Spots NASA’s InSight Lander From Space where you can see the pair of reflections from the pair of solar panels:

A zoomed-in view of the InSight lander. Its two solar panels are clearly visible as the brightest spots. The inset photo is a selfie taken by the lander a few days ago. The lander is about 6 meters (20 feet) wide when the solar arrays are fully deployed. Image: NASA/JPL-Caltech/University of Arizona/Gizmodo 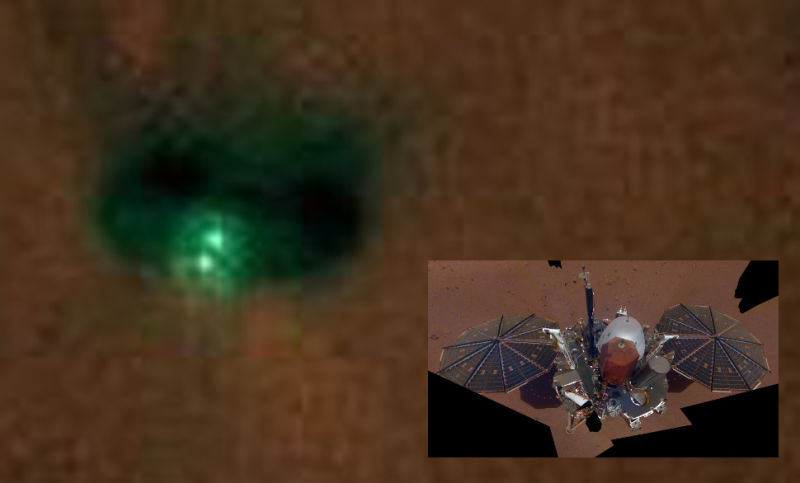 On Feb 23th ExoMars spotted Perseverance, its parachute, descent stage, and heat shield with its 4.5 m per pixel color stereo surface imaging camera (CaSSIS). Of course, it helped they knew where to look.

The parachute and back shell are quite bright, and the heat shield is distinct. It didn't so much see the rover as the distinct pattern kicked up by the skycrane. 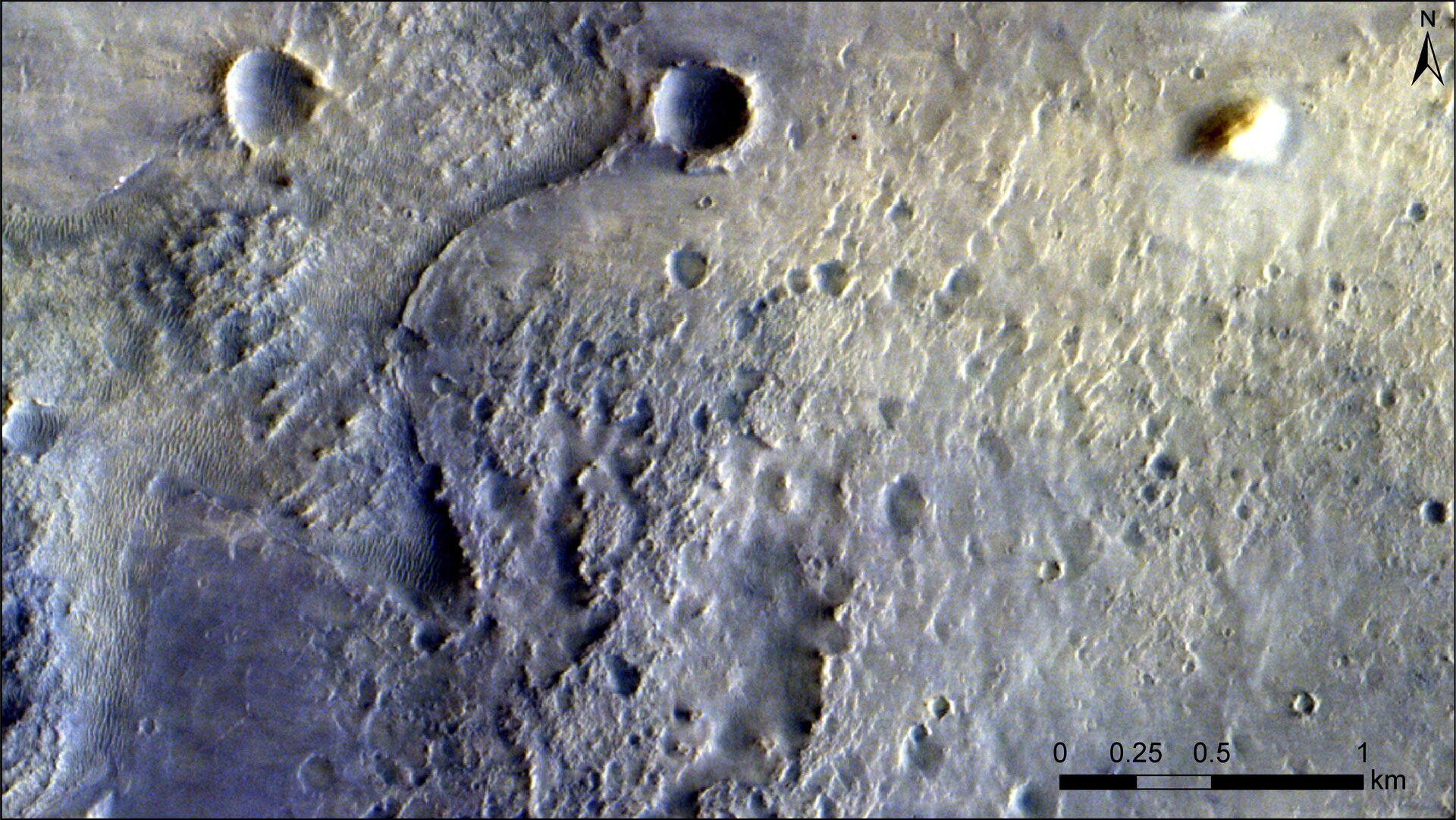 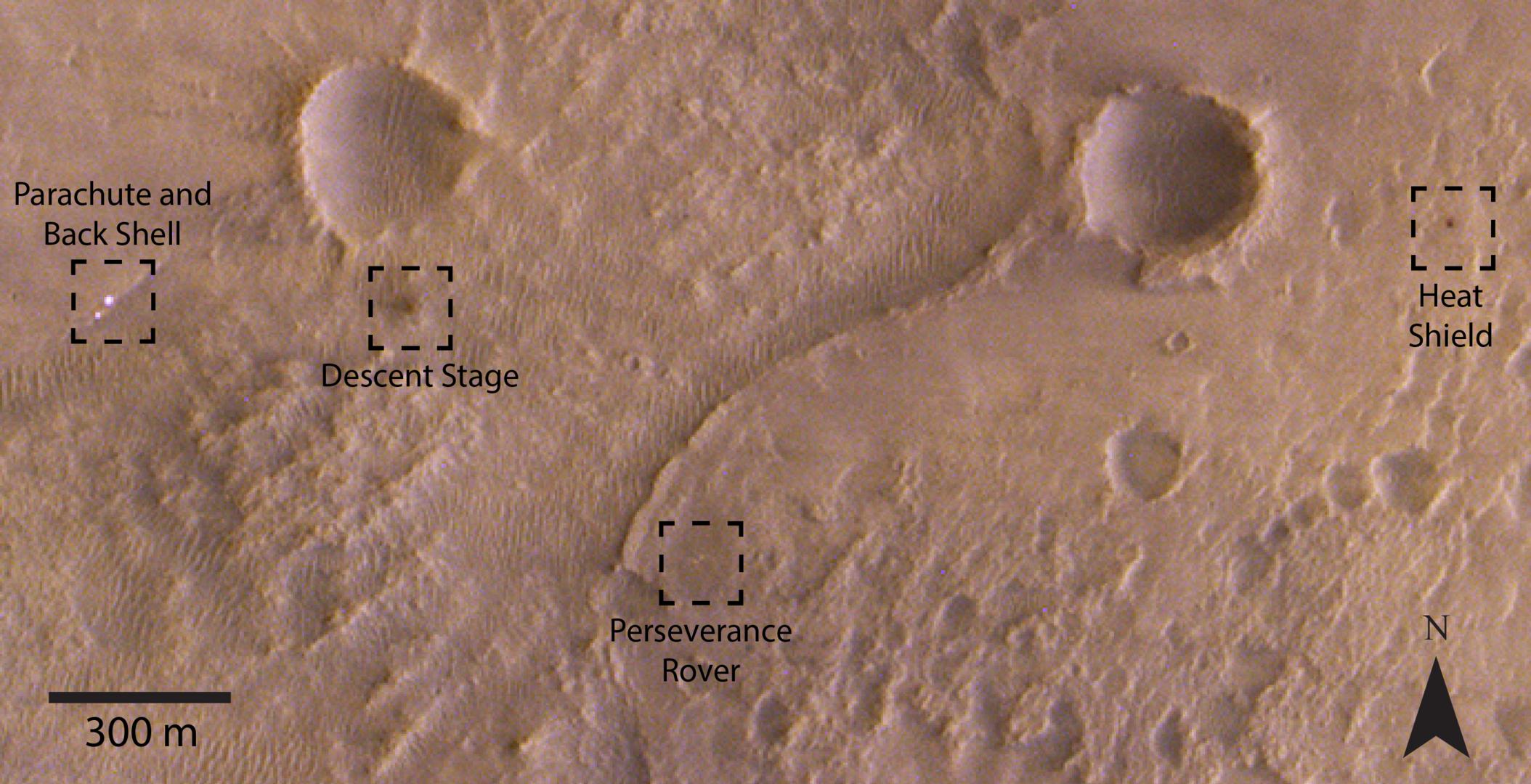 Not the answer you're looking for? Browse other questions tagged exomars trace-gas-orbiter or ask your own question.

1
Will the HiRes camera of the Chinese orbiter be capable of seeing the shadows of the landers and rovers on Mars?
7
Why does the Perseverance landing site have three close bright dots in a line, with a perpendicular dark streak?

1
Magnetic Memory to Mars?
20
Curiosity is still dirty! How will the ExoMARS Rover keep its solar panels dust-free and collecting sufficient power?
7
Will Exo Mars serve as a relay for non ESA/Roscosmos missions?
2
Could the NOMAD instrument on the TGO detect methane at night with sufficient reflected sunlight or artificial light?
2
For the three spacecraft now on their way to Mars plus ExoMars, how many have any solar power capability during transit?