What 'contributions' could this private company have made to Boeing?

I was traveling through Nevada when I stopped to eat at Windmill Ridge - a motel / resturaunt combo thing. I noticed this plaque on the wall: 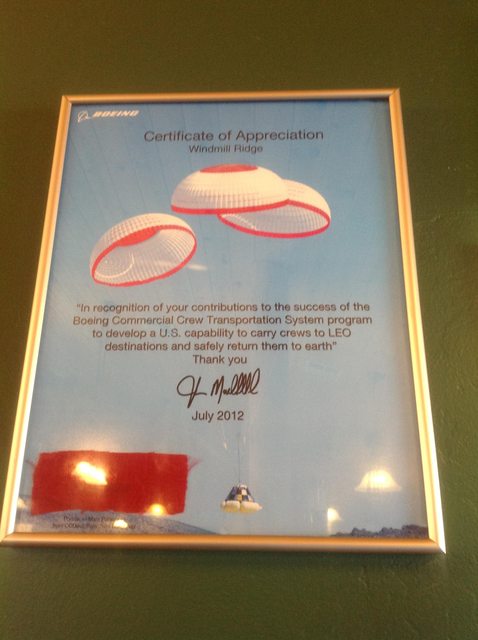 "In recognition of your contributions to the success of the Boeing Commercial Crew Transportation System program to develop a U.S. capability to carry crews to LEO destinations and return them to earth" Thank you.

What 'contributions' could the private company have make?

As posted in a comment, the most likely contribution of a motel/restaurant to a manned space program is a discount on rooms or food. To be more specific, this specific plaque is almost certainly a reference to food/lodging related to the April 3/May 2, 2012 drop tests of Boeing's CST-100 crew capsule.

It's not even a discount. Sometimes it's just moral support.

Every NASA space center that involves dangerous activities has a select few restaurants and bars that everyone knows by name. The same goes for Navy and Air Force bases that involve dangerous activities. For example, there is no Building Zero on the JSC campus (building numbers start at one, which is the main administrative building). Nonetheless, if you tell people "we're getting together at Building Zero after work", nobody needs directions.

Before this bar, astronauts and engineers hung out at the now closed Outpost Tavern, formerly known as The Ultimate Joint. It's the astronaut bar in Apollo 13. Edwards AFB had its Happy Bottom Riding Club (watch The Right Stuff). The only centers that don't are the ones that don't do dangerous stuff.

It's a bit difficult to give a bar a "Certificate of Appreciation". A restaurant? That's not a problem. I've been to multiple NASA centers and multiple Air Force and Navy bases. Each one has restaurants that have pictures on the wall. Here's one in the JSC area: There are multiple restaurants in the neighborhood of NASA JSC, NASA KSC, NASA ARC, JPL, Edwards AFB, Fort George Meade, and China Lake that have certificates exactly like this; I've been to many of them. I've never been to the Delamar Dry Lake area.

Not the answer you're looking for? Browse other questions tagged boeing cst-100 or ask your own question.

0
What are the “Boeing Lunar Orbiter spacecraft” from the 1960s? Why is “Boeing” in the name?
3
What “gap” could have caused the Starliner instructions to be delayed?