How was the standard of a potentially hazardous object (PHO) being determined?

I was going through an article about Bennu asteroid and OSIRIS-REx mission and done a quiz. There is an interesting question:

a. One at least 500 feet wide that can come within 4.65 million miles of Earth

b. One at least 1 mile wide that can come within 1 million miles of Earth

c. Any asteroid that hits us

The correct answer shown is a. I've briefly go through information of it on Wikipedia. However, I wonder how scientists determine a as the standard of a potentially hazardous object (PHO) instead of b? Isn't b sounds more suitable and dangerous than a?

tl;dr: That answer is not exactly correct. The correct answer is 0.05 AU and absolute magnitude = +22. You only get ~500 feet if you assume an albedo, which is going to be a good guess but really an unknown.

...having a minimum orbital intersection distance with Earth of less than 0.05 astronomical units (19.5 lunar distances) and an absolute magnitude of 22 or brighter.

and that sentence cites https://cneos.jpl.nasa.gov/about/neo_groups.html which explains:

Potentially Hazardous Asteroids (PHAs) are currently defined based on parameters that measure the asteroid's potential to make threatening close approaches to the Earth. Specifically, all asteroids with an Earth Minimum Orbit Intersection Distance (MOID) of 0.05 au or less and an absolute magnitude (H) of 22.0 or less are considered PHAs. In other words, asteroids that can't get any closer to the Earth (i.e., MOID) than 0.05 au (roughly 7,480,000 km or 4,650,000 mi) or are smaller than about 140 m (~500 ft) in diameter (i.e., H = 22.0 with assumed albedo of 14%) are not considered PHAs.

Absolute magnitude is the magnitude it would appear if 1 AU from both you and from the Sun, and viewed (nearly) head-on. this answer links to the CNEOS Asteroid Size Estimator where you can translate absolute magnitude that to a given size for a given albedo. 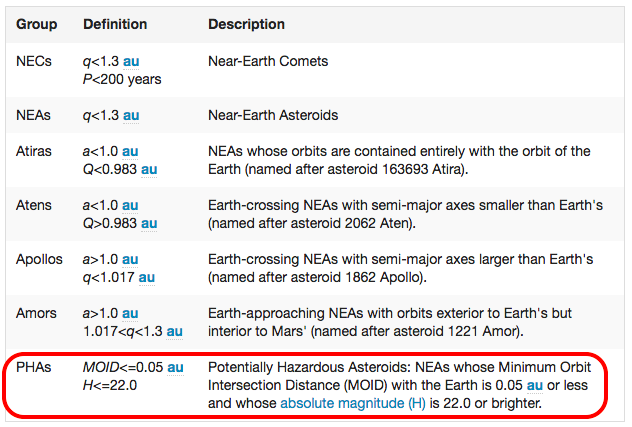 The reason that it's done this way is because albedo is something we can measure and report, size is extremely hard to measure except for a few large asteroids (by their gravitational effect on other bodies, or by delay-dopper radar, or by flying up to them and snapping some photos).

You can see where the 140 meters in the block quote comes from in the CNEOS table, using 14% albedo and absolute magnitude +22. More about how to use absolute magnitude and use them to esitmate apparent magnitudes in this answer (see also). 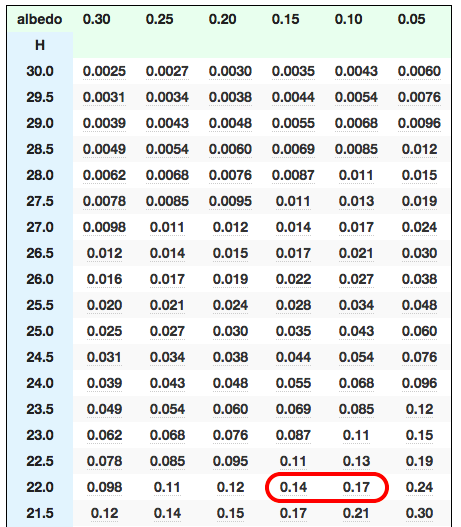 Not the answer you're looking for? Browse other questions tagged asteroid or ask your own question.

7
What was/is the Minor Body Exploration Forum?
8
How much of the asteroid belt is discovered?
5
How does the hopping mechanism of the Minerva II rovers work?
7
What precisely was the character of the non-gravitational acceleration of Oumuamua?
1
How do Saturn's rings affect the surface of the planet?
9
How small must an asteroid be to burn entirely in the martian atmosphere?
2
Could ejecta from asteroid Bennu enter into temporary orbit around it? If so, how?