help understanding this complicated structure that will deploy HySIS

This ISRO page for the HysYS spacecraft says:

HysIS, the primary satellite of PSLV-C43 mission, weighing about 380 kg, is an earth observation satellite configured around ISRO’s Mini Satellite-2 (IMS-2) bus. The primary goal of HysIS is to study the earth’s surface in the visible, near infrared and shortwave infrared regions of the electromagnetic spectrum.

It has several images, and I've cropped one below.

In addition to HysYS, the smallsat at the top of the payload holder (folded solar panel facing us) there are several terraced layers below it, with lots of electronics and at least sixteen shoebox-sized enclosutes, about eight of them are the same blue in color but here are silver and gold shoeboxes as well.

At first I would have thought they were all cubesat deployers, but their shapes and sizes are more mixed than I would have expected for that.

Is it possible to explain what these shoe boxes are? If they are there to deploy the thirty commercial cubesats and nanosats, there doesn't seem to be enough of them, and I would expect them to be standardized and uniform in construction and mechanism. 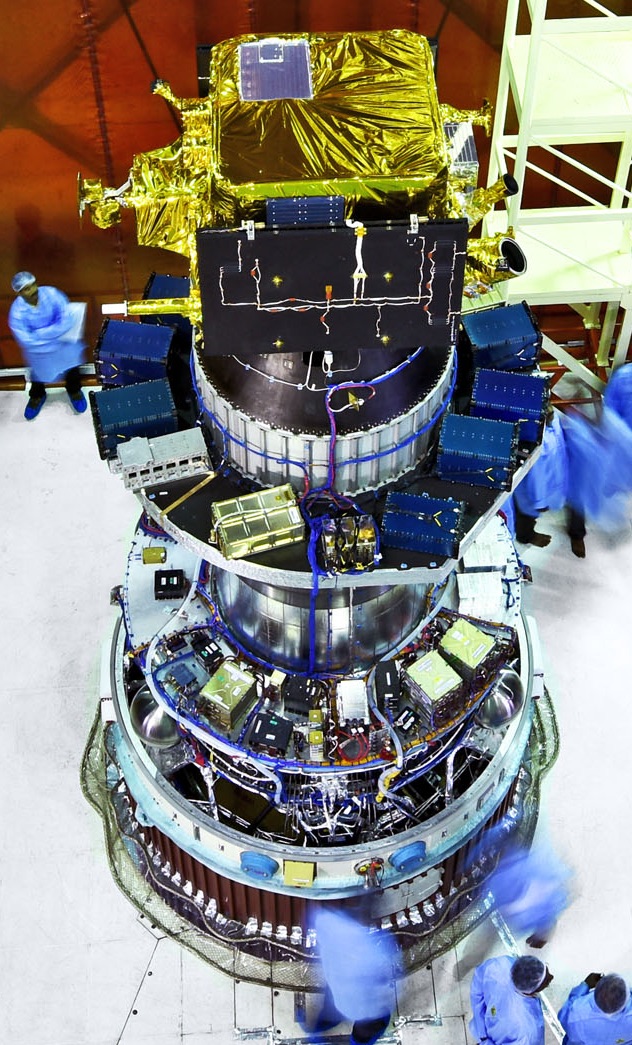 The blue boxes on upper deck are cubesat deployers by ISIS. One that can house four 3U cubesats is called 'Quadpack'

ISRO/Antrix also provides its own set of deployers and separation mechanisms for smallsats. Here's a brochure for those.

On lower deck (equipment bay) it is mainly avionics but some region can be utilized for payload.

Above presentation is slightly old and ISRO has since then introduced few different satellite adaptors like this Multiple Satellite Adapter Version 8 (MSA-V8) with circular deck for PSLV-C42 / NovaSAR-S + S1-4 mission.

Various versions of Dual Launch Adapter or DLA have also been used over time for multi-satellite PSLV missions.

Not the answer you're looking for? Browse other questions tagged cubesat isro payload payload-deployment pslv or ask your own question.

13
Why aren't space telescopes put in GEO?
8
Why does the F9 second stage roll back and forth during deployment of each RADARSAT satellite?
4
How close will the cubesats be when numerous of them are launched simultaneously?

7
Why would the future Nanoracks airlock be built so that it must be removed from the ISS to deploy cubesats?
5
ISRO's PSLV-C37 with 104 satellites - after 56 hours only six TLEs, which factor is greatest challenge?
9
How do cubesat owners first find out their cubesat's initial trajectory? How do they point antennas at it before official TLEs start to appear?