Just that, though a passing reference to the beverage or photographic evidence may be required supporting information.

Here "deep space" can include cis-lunar space. If there is a particularly compelling Earth orbit beverage, that might be of interest as well.

Short runs of beer or wine would be more interesting than something like Sputnik Kool Aid. and don't forget to look for examples beyond the US!

Name could refer to the spacecraft, the mission name, or the primary solar system body that the mission is associated with, as long as it references the mission as well. (A generically named "Jupiter cola" wouldn't qualify)

One example comes to mind, though I am sure others will follow.

In this case the color of the beer was a adjusted to match Bennu’s spectral abedo!" 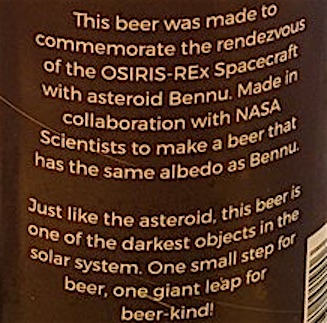 A retweet by The Planetary Society's Senior Editor and evangelist Emily Lakdawalla of the recent tweet by @jasondavid aka Jason Davis a digital editor for the Planetary Society shows Osiris-REx Bennu Arrival beer, a short run by Dillinger Brewing in Tuscon, Az.

You can read more here:

Eric Sipe, owner and general manager of Dillinger Brewing, was on the same board of directors of the Boys and Girls Club in Southern Arizona as OSIRIS-REx Principal Investigator Dante Lauretta.

"Dante is more of a beer guy, so he asked me if we could produce some sort of beer," Sipe said, "and I was all about it."

Creating a series of seasonal beers related to the mission, Dillinger Brewing first came out with "Bennu Approach" and now that OSIRIS-REx has arrived at the asteroid, the new beer available is "Bennu Arrival."

“He approached me about doing a beer,” Sipe says. “They’ve done a wine before, but he’s more of a beer guy and so am I.”

But Sipe didn’t stop there. He took his research one step further.

He worked with scientists at the University of Arizona to ensure the color of the beer was a perfect match for Bennu’s albedo, which is the measure of how much light reflects off it. He says he dropped off three beer samples to the scientists to see which was the best match. 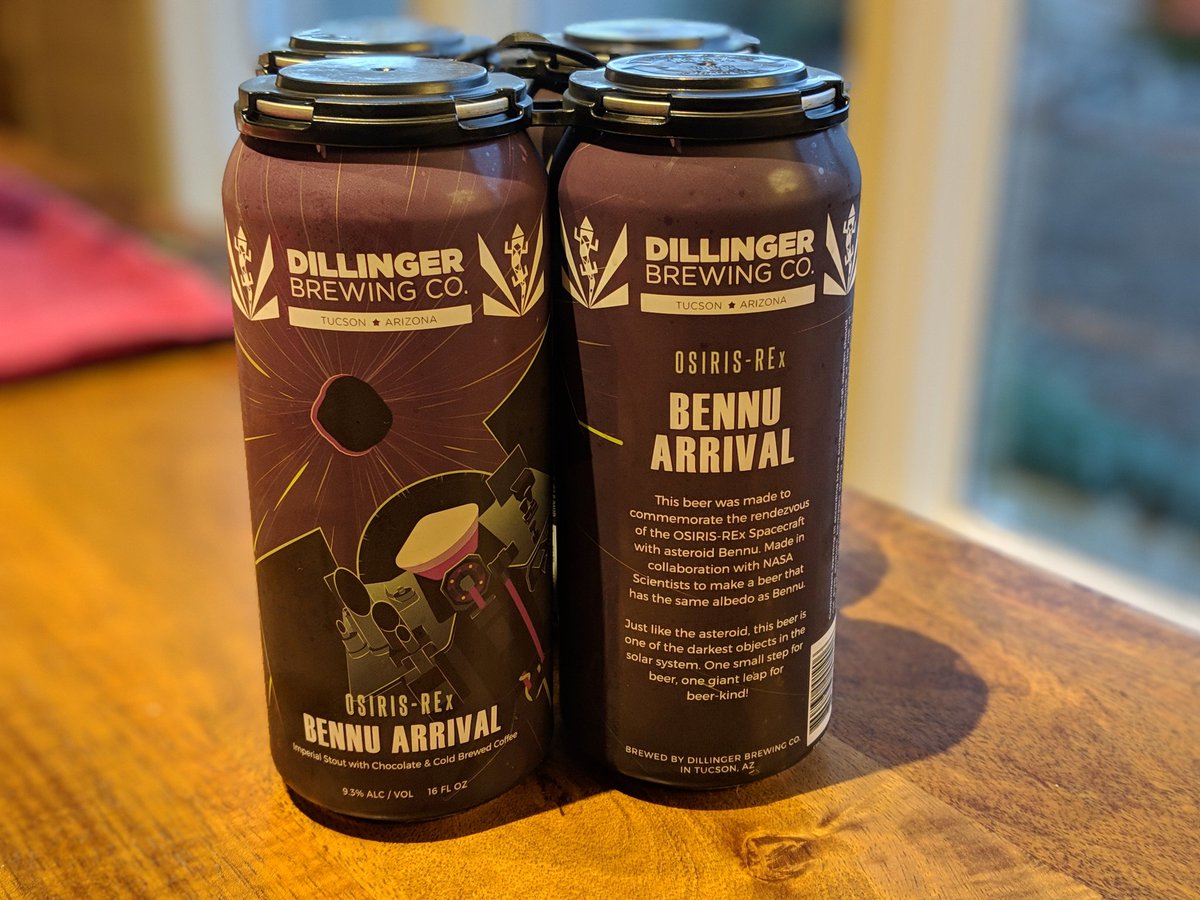 Not the answer you're looking for? Browse other questions tagged commercial or ask your own question.

-3
Has there ever been musical events or performances associated with deep-space spacecraft or their flyby maneuvers?

9
What liability do commercial space firms have for abandoned space junk?
3
Why exactly did ESA provide a grant funding blockchain in space? Which program was used for the funding? What will this do?
1
Psyche & others will use Maxar 1300 series platform; are these the first instances of a commercial communications satellite bus sent to deep space?