Why is FAI considering lowering the Karman Line to 80km?

I ran across this FAI statement

The Karman line is the 100km altitude used by FAI and many other organisations to mark the “boundary” of space . In the last few years there have been many scientific and technical discussions around this demarcation line for the “edge of space” and variance around this as a boundary condition for recognition of “astronaut” status.

Recently published analyses present a compelling scientific case for reduction in this altitude from 100km to 80km. These analyses combine data/modelling from a number of differing perspectives (latitudinal variations during solar cycles, theoretical lift coefficients for different size/configuration satellites ranging from cubesats to the International Space Station, perigee/apogee elliptical analysis of actual satellite orbital lifetimes etc) to a level that has never been done before in relation to this issue. They also provide an accurate overview of some of the historical arguments and inadvertent misrepresentations of Karman’s actual analyses and conclusions from over half a century ago.

FAI has therefore been in contact with the International Astronautical Federation (IAF) to propose that an international workshop is held during 2019 to fully explore this issue with input and participation from the astrodynamics and astronautical community.

What is driving this potential change?

tl;dr: The FAI is doing that because they were convinced by Johnathan McDowell's proposal, one that he first forwarded 25 years ago. The FAI's statement must refer to his recent paper on the topic. ✅

I have shown that for a typical satellite ballistic coefficient the effective Karman line is close to (within 10 km of) 80 km independent of solar and atmospheric conditions, rather than the currently popular 100 km value; and that historical orbital data for actual artificial satellites confirms that orbiting objects can survive multiple perigees at altitudes around 80–90 km. This altitude range is consistent with the highest physical boundary the atmosphere, i.e. the mesopause, and with the 50-mile ‘astronaut wings’ boundary suggested by the United States during the first years of the Space Age.

On the basis of these physical, technological and historical arguments, I therefore suggest that a value of 80 km is a more suitable choice to use as the canonical lower ‘edge of space’ in circumstances where such a dividing line between atmosphere and space is desired.

From the question Have spacecraft ever dipped below the Karman line and then safely continued spaceflight?:

The item in Science Alert's A Harvard Astrophysicist Says Outer Space Is Actually Closer Than We Think (see also Science; Outer space may have just gotten a bit closer) talks about the recent Acta Astronautica article by Jonathan McDowell The edge of space: Revisiting the Karman Line, and ends with the quip:

That doesn't mean we're going to see any commonly used definitions change soon, though: McDowell first proposed his 80-kilometre boundary line in 1994 - over 25 years ago. Perhaps we need a new term for it instead: the McDowell line.

I think the idea is that once something that's been in Earth orbit drops to the Karman line in circular orbit, it's "toast" in that it's fate is fairly well sealed and it has hours to perhaps a day at most before burning up.

"Are you going to say [these satellites are] in space and then not in space every 2 hours?" he told Science. "That doesn't seem very helpful."

I've "bulletized" the block quote of the FAI statement in the question as follows:

These analyses combine data/modelling from a number of differing perspectives

Now let's look at McDowell's paper to see if those are addressed there.

To understand the effect of these variations on the function z(k) I ran models for assorted times and geographical locations using a code which implements the NRL MSISE-00 atmospheric model [41]. Atmospheres were calculated at 10 day intervals from Jan 1960 to Jan 2020 to fully sample several solar cycles. At each selected day atmospheres were calcualted for 0, 6, 12 and 18 h GMT at four latitudes (80 S, 0 N, 45 N and 80 N) and four longitudes (0, 90, 180, 270 E). For each epoch, actual or (for future dates) predicted solar activity levels from the Celestrak space weather archive [42] [43], were used.

Sections 5.1 through 5.3 are too long and in-depth to try to generate a sound-bite here. The paper is not paywalled and can be reviewed by the reader. However I'll summarize that instead of sticking explicitly to the drag and lift coefficients $C_D, C_L$ McDowell abstracts the problem to something he defines here as the Karman parameter

He provides values for $B$ from a wide variety of extreme examples, from the ISS, to balloons, to Dove cubesats, to a 10-m-diameter solid sphere of pure osmium! 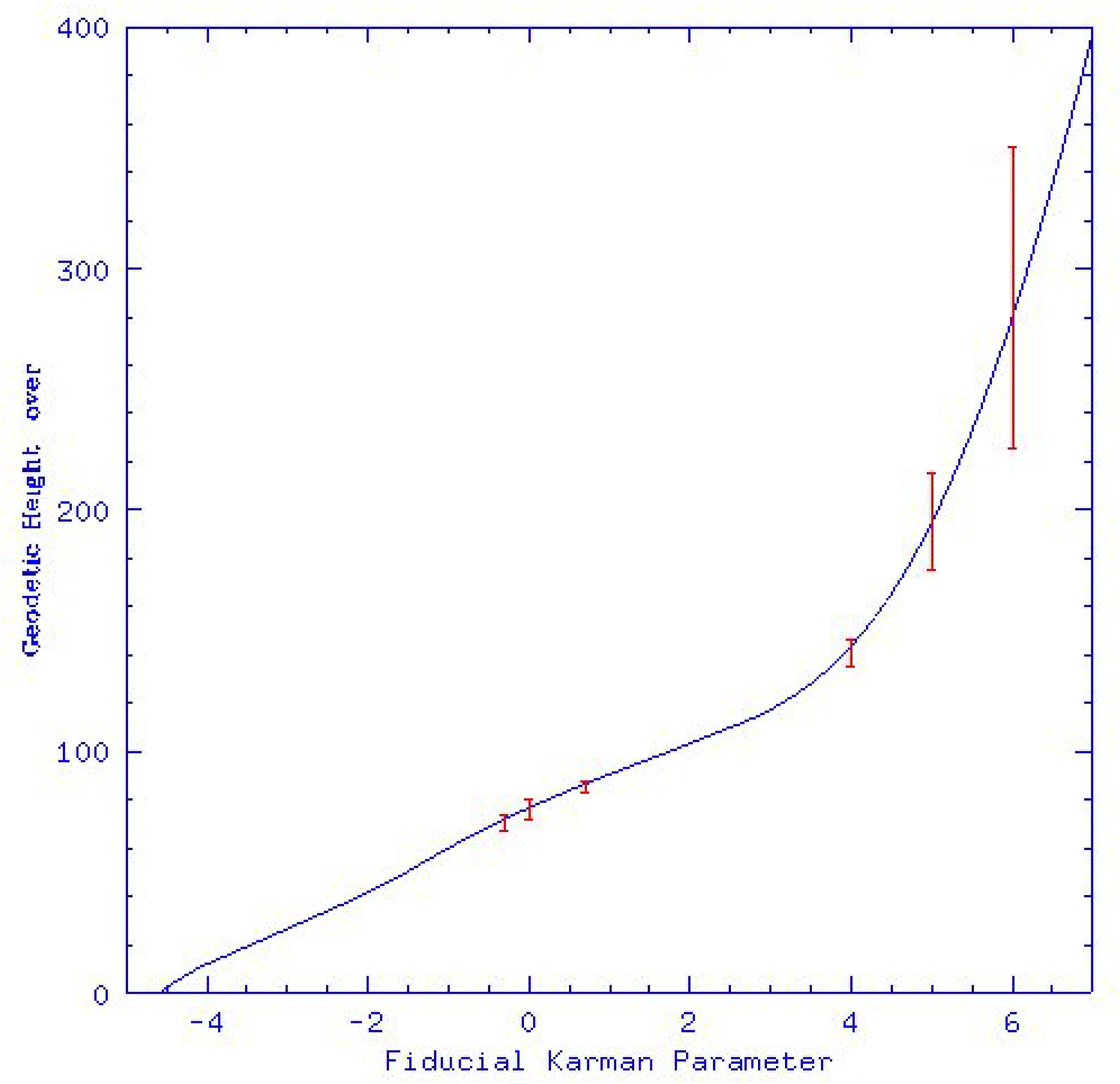 above: Fig. 2. Fiducial Karman parameter versus geodetic altitude for US Standard Atmosphere 1976. The vertical error bars summarize the results of Fig. 3, Fig. 4, indicating the range of variation in the altitude for a given value of found in runs of the NRL atmosphere model for different dates, latitudes and longitudes.

Note that based on this analysis, the logarithm of the fiducial Karman parameter reaches zero at an altitude of 80 kilometers. 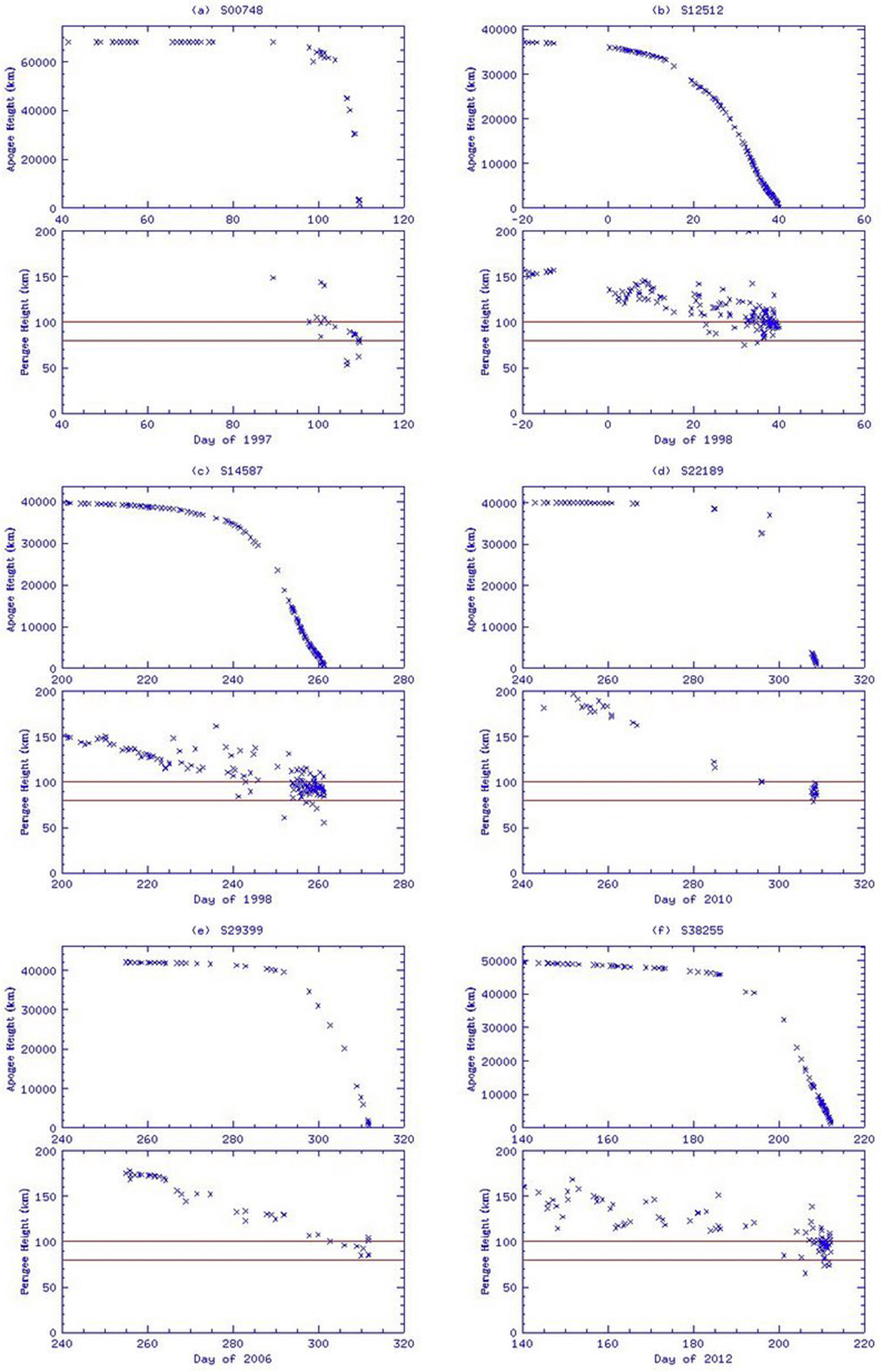 To add to uhoh's excellent answer: first, the original Kármán line was calculated to be at 57 mi (91.5 km) on average (the 100 km value is just to make it "more memorable") (see Kármán line), and 2nd, the Kármán line, wherever it is set, can't be used as the border between the atmosphere and the vacuum of space at all because it relies not only on air/vacuum but also on factors that have nothing to do with whether you're in air or in vacuum: mass, size, density and gravity of the planet in question.

If the Earth had a lower or higher mass while maintaining 1 atm, the Kármán line would change despite the atmospheric pressure remaining the same, because orbital velocity would be lower or higher. That's simplificated of course, other factors would be involved, but you see that the Kármán line is dependent on factors that have nothing to do with air/vacuum.

It's also pointless because a circular orbit can't be stable at 91.5 or 100 km at all while perigees of elliptical orbits can go below that and remain stable, as uhoh noted.

Ironically, Von Kármán himself calculated that the altitude at which the atmosphere becomes to thin to support aeronautical flight is 83.6 km (51.9 mi) which is close to the U.S.-defined space border.

Not the answer you're looking for? Browse other questions tagged karman-line or ask your own question.

23
Karman line analog on other celestial bodies
11
Did the crew of Soyuz MS-10 pass the Karman Line?
4
When do aircraft become solarcraft?
10
What did Karman's original "Karman line" calculations look like?
16
Have spacecraft ever dipped below the Karman line and then safely continued spaceflight?
7
With a 10% increase in Earth's mass, would the Karman line move up or down, and by how much?
5
What factors would contribute to a spacecraft's ability to maintain a very low orbit (VLEO) or at least orbits with very low perigees?
4
Was there a spacecraft that was clearly the first to be put in a polar orbit?
5
Are satellites whose orbits go below 100 km perigee considered having multiple spaceflights?
3
When is/will be the symposium to revisit the Karman line and consider the "McDowell line"?
See more linked questions

23
Karman line analog on other celestial bodies
10
What did Karman's original "Karman line" calculations look like?
2
At what conference did the "von Kármán line" arise, and was discussed for the first time?
7
What is the practical use of the Karman line?
1
What are the minimum and maximum calculated, published altitudes of the Kármán line?
3
When is/will be the symposium to revisit the Karman line and consider the "McDowell line"?
7
With a 10% increase in Earth's mass, would the Karman line move up or down, and by how much?