How much delta-v is lost to heat of exhaust?

It occurred to me that all of the kinetic energy not going exactly in the opposite direction of a spacecraft is wasted! Since heat is essentially kinetic "noise" in objects, I wondered how much more boost one could get from eliminating all heat from the exhaust.

What would the delta-v of say, a falcon 9 look like if its raptor engines were equipped with a variation on Maxwell's Demon, and only allowed particles moving exactly the opposite direction to leave the nozzle? A "Cryorocket" or "Kelvin Drive" if you wanted something that sounded like sci-fi.

Partial answer to a very cool question! While the pun was not intended, I'll take credit for it anyway.

One of the functions of the nozzle† is indeed to "remove" as much of the heat as is practical and convert that kinetic energy from random to ordered motion.† Same mechanism has been hypothesized for water plumes released to space from subsurface oceans of natural satellites.

† Of course simply allowing expansion of the ~100 atm chamber pressure to lower pressure is a big part of generating thrust as well.

In the atmosphere the nozzle has to stop expanding when it reaches roughly an equal pressure to the ambient atmosphere. Beyond that expansion, other problems begin.

In space you could continue to expand (longer nozzle with larger exit diameter) and reduce the temperature even farther, but the nozzle gets really big and at some point there is no place to store it during ascent. And at the same time, the incremental benefits further diminish each time the size increases.

Note that some heat is lost by radiation from the red-hot nozzle. We'd need a thermal infrared analysis to understand how much heat is radiated from the nozzle, and compare that to how much heat is lost by the still-hot exhaust That can't as easily be measured quantitatively, since even if transparent materials can produce a black-body spectrum, that doesn't mean they are effective black-body radiators.

Converting the remaining energy in the exhaust from a well-designed engine and matched nozzle into a little bit more thrust by making the nozzle longer in space will probably not boost the exhaust velocity (and therefore boost the Isp) by a lot, but people work hard for every bit of delta-v, so I think that it's simply the practical limitations of a 5, 20, or even 100 meter diameter nozzle that keep this from being done.

Using an engineered "Maxwell's Demon equivalent" will have to be addressed by other answers. 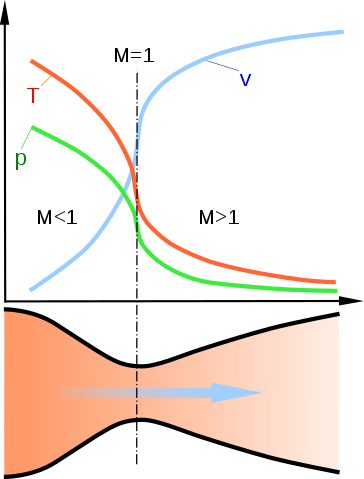 Not the answer you're looking for? Browse other questions tagged propulsion heat or ask your own question.

11
What is the temperature inside a methane/oxygen rocket engine?
5
How is salt transported from the subsurface ocean and ejected with the plumes of water from Enceladus?
4
Quantitative plots of v, T, p, vs position from chamber through nozzle to ambient for a few canonical modern engines?
3
Temperature and pressure of rocket exhaust

13
How much delta-v can be achieved by venting the ISS atmosphere?
4
Mass and efficiency of heat radiators
0
heat recovery thermodynamics in space
6
Parker Solar probe's heat survival - Heat vs Temperature
2
Heat balance of the ISS: breakdown?
2
How much heat is reabsorbed by a high-speed object?
3
How to determine heat transfer for survival on Venus?
14
Ablative heat shield and conservation of energy, how much does ablated matter in fact "carry away" versus re-radiate the absorbed heat?