If Oumuamua was alien space-junk, what would it look like, and would we be able tell?

Whilst I'm happy to accept the official explanation of what it is, I'm curious about what state it would be in if it was actually alien space junk that's been drifting for hundreds of millions of years.

The NASA site I linked suggests it's about 400m long, 40m across, irregular in shape, has a rocky surface and is reddish in colour. Wouldn't this description also apply to a chunk of space junk that has collected accumulations of space dust held together by micro-gravity?

If it was alien space-junk how close would it have had to pass to earth for us to recognize it as such? Apparently it passed at a range of 200 million kilometers, so I'm guessing no one really managed to get a very good look at it.

To address the tl;dr request, for an answer to "would we be able to tell", the answer is "possibly", using thing like I've mentioned in the bullets following

The paper Could Solar Radiation Pressure Explain 'Oumuamua's Peculiar Acceleration? published in The Astrophysical Journal Letters (Shmuel Bialy and Abraham Loeb, 868, 1, ) can also be viewed and downloaded in preprint form from ArXiv.

We explore the possibility that the excess acceleration results from Solar radiation pressure. The required mass-to-area ratio is (m/A) ≈ 0.1 g cm−2. For a thin sheet this requires a thickness of ≈ 0.3−0.9 mm. We find that although extremely thin, such an object would survive an interstellar travel over Galactic distances of ∼ 5 kpc, withstanding collisions with gas and dust-grains as well as stresses from rotation and tidal forces. We discuss the possible origins of such an object. Our general results apply to any light probes designed for interstellar travel.

In order to quantitatively explore the possibility that 'Oumuamua could be a thin artificial structure such as a solar sail, the authors have carried out thorough scientific analysis of the question. I've captured bits of their analysis below. From this it is clear that even for a wide variety of material types considered, and for both natural and artificial object, there would be some clear evidence of interstellar travel. These would include

The article does not describe the amount of accreted material on the surface, nor the resulting optical properties. Therefore visual cues like color would be a poor way to try to distinguish an artificial from a natural body after an interstellar trip like this.

However even for thin shells of material ≈ 0.3−0.9 mm considered here, the paper concludes that the underlying material would remain intact. This means that if one could explore bulk properties, a lot could be determined.

might be just a few (mostly) non-contact methods that could be used to address the composition of 'Oumuamua and to address the question of it more likely being of natural or artificial origin.

NOTE: This Astrophysical Journal Letter is densely written, full of math, and heavily sourced. I've just captured a few "sound bites" from it, but the reader is encouraged to dive in to the ArXiv version first, before asking questions about the paper's conclusions. 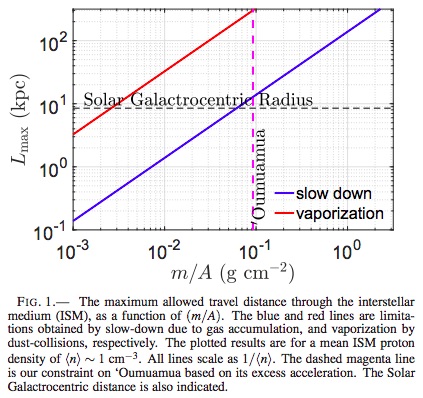 For our constrained value for the mass-to-area ratio, ‘Oumuamua can travel through the entire galaxy before a significant fraction of its mass is evaporated. Evaporation becomes important at higher speeds.

When an object travels at a high speed, collisions with atoms in the ISM can potentially transfer sufficient energy to produce sputtering... At higher speeds, the yield increases but typically remains below 0.01 (Tielens et al. 1994), thus at any velocity, vaporization and slow-down remain the dominating processes limiting the allowed distance an object can travel through the ISM.

Cosmic-rays are expected to cause even less damage. Although their energy density is comparable to that of the ISM gas, they deposit only a very small fraction of their energy as they penetrate through the thin object.

Thus, even when self-gravity is ignored, ‘Oumuamua can easily withstand its centrifugal force.

Thus, unless ‘Oumuamua encountered an extremely close approach to a star in its past, it is unlikely that tidal forces played any significant role.

For a planar geometry and typical mass densities of 1–3 g cm−2 this gives an effective thickness of only 0.9–0.3 mm, respectively. For a material with lower mass density, the inferred effective thickness is proportionally larger. We find that although very thin, such an object can travel over galactic distances, maintaining its momentum and withstanding collisional destruction by dust grains and gas, as well as centrifugal and tidal forces. 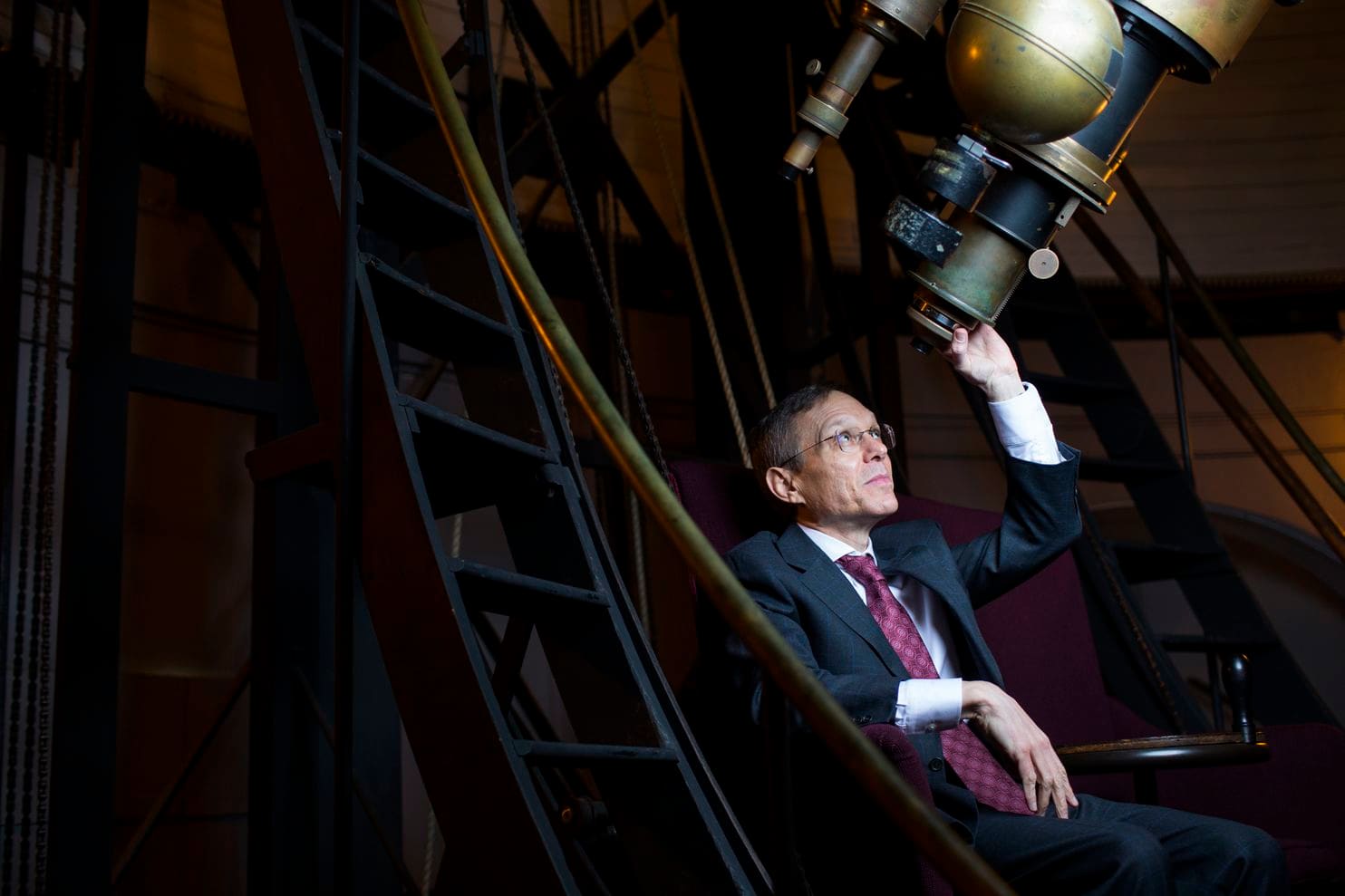 Source: Washington Post's Harvard’s top astronomer says an alien ship may be among us — and he doesn’t care what his colleagues think

Avi Loeb poses in the observatory near his office in Cambridge, Mass. His theory about an alien spaceship has made the rounds in the media and caused controversy in the academic community. (Adam Glanzman/For The Washington Post)

Not the answer you're looking for? Browse other questions tagged interstellar-travel asteroid debris or ask your own question.

4
Why isn't "cylindrical alien derelict spacecraft" more common in theories of Oumuamua as an alien probe?
2
Examples of gamma ray or X-ray imaging of small planets, moons, or asteroids, or at least how to calculate intensity thereof?

19
How much of a problem is space junk, and how can we clean it up?
10
What is being done to cleanup space of junk, particulary laws and litigation?
9
What liability do commercial space firms have for abandoned space junk?
7
What was all of the junk in the SES satellite deployment?
16
What is the biggest piece of space junk?
8
How would a laser "shoot down" space junk?
7
What precisely was the character of the non-gravitational acceleration of Oumuamua?
6
What would the Voyager probes look like today?
2
How is 'space junk' monitored pre-launches and when picking satellite orbits?
25
What would the Venus landers look like today?