From whence (what ground stations) do the world's major space agencies receive signals from their missions?

SRO Telemetry Tracking and Command Network (ISTRAC) will be providing support of the TTC ground stations, communications network between ground stations and control center, Control center including computers, storage, data network and control room facilities, and the support of Indian Space Science Data Center (ISSDC) for the mission. The ground segment systems form an integrated system supporting both launch phase, and orbital phase of the mission. 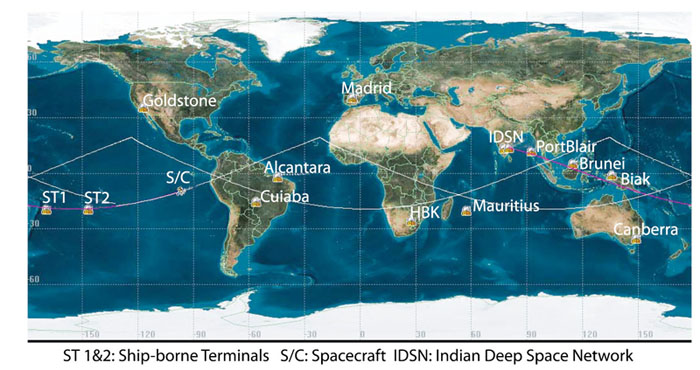 ISTRAC, ISSDC, INPE, SANSA, DSN... I only recognize DSN, and probably ESA has a host of tracking stations as well.

Question: Is there a source, or a few sources, that together will describe all of the "main" ground stations used for telemetry, tracking of transmissions (not radar) and communications with deep space missions from launch to transit to destination? Trying to list every site here would be huge and non SE-compliant. Instead, let's identify a few sources which together provide a handle on what will likely turn out to be several dozens of sites.

note: From time to time radio telescopes are used as well. These do not need to be counted here, but anecdotal examples include Green Bank, Arecibo, and Giant Metrewave Telescope:

Since we're limiting the scope here to ground stations interfacing with 1. deep-space missions that are 2. used by major space agencies, I'm going to take a moment to set up a few definitions before delving into the main discussion at hand.

The term 'deep space' has been subject to a fair amount of quibbling in the past: the International Telecommunications Union (ITU) defines the boundary as being 2 million km from Earth (see here), whereas NASA JPL has cited geostationary orbit (at 35,000 km from Earth) as being the baseline for DSN's functionality (with the stipulation that DSN is sub-optimal at communicating with spacecraft closer to Earth). Depending on who you agree with, the Moon and Earth-Sun Lagrangian points L1 and L2 may or may not be considered 'deep space'; the ITU, at the very least, does not permit use of its Deep Space Bands for missions that are less than 2 million km from the Earth. Since this question asks about international space agencies, and not just NASA, I'll opt for the ITU's definition for the purposes of this post.

As addressed in this article by the ESA, use of ground stations is often shared between agencies as part of international cooperation efforts, and thus there is certainly a 'core' ground stations that see more use than others of their ilk. However, in defining the scope of which of the other ground stations to mention, I'd like to clarify what I'm taking 'major space agency' (in the context of this question) to mean. For the sake of this post, I will opt for a broad definition and consider 'major space agencies' as referring to any national/governmental space organizations which have launched craft that operate past the ITU-defined deep space boundary. This includes, at minimum, the following space agencies: NASA (United States), ESA (the European Union), JAXA (Japan), ISRO (India), CNSA (China), and the former Soviet space agency.

There are, of course, a number of other agencies involved in helping maintain and support the use of these ground stations - the Consultative Committee for Space Data Systems, which writes guidance on space communications, has a substantial list of members (as can be seen from this document here) that extend beyond the list provided here.

Communicating with deep-space missions prior to reaching deep space

Most deep-space antenna networks are not optimized for communicating with objects in low Earth orbit, etc. (see the JPL article linked in the 'deep space' definition section); thus, in the early parts of a mission's trajectory, ground stations like the Near Earth Network(NEN) or the Space Network(SN) would be used for communication, with communications switched over to ground stations optimized for deep-space later in the trajectory.

While the NEN and SN are NASA's preferred networks for communicating with missions that are closer to Earth, most of the other major space agencies listed above have their own ground station networks. I don't believe there is a comprehensive list of all of the near-Earth ground stations in use by all the world's agencies (since there are quite a few more of those than there are deep-space stations), but until a brave soul puts one together I believe the list above is a good guide to the major players. (For what it's worth, the ESA and ISRO links should mention the locations of those agencies' near-Earth antennas along with their deep-space ones).

Thus, if we include in the review the entire history of the space age: 1. Deep Space Network https://en.wikipedia.org/wiki/NASA_Deep_Space_Network Established October 1, 1958

10
Why was the 100m Green Bank dish needed together with DSN's 70m Goldstone dish to detect Chandrayaan-1 in lunar orbit?
8
If the ESA has its own deep space network, why does it use NASA's?
4
Was the time of Schiaparelli's landing chosen specifically so the Giant Meter Wave Radiotelescope could listen?
3
What are the prospects for comms with cubesats using “normal” internet connections?
5
How does the Satellite Networked Open Ground Station operate? How is it used?
3
What will China's new “space station” in Argentinian Patagonia be used for?
3
How have/how will Indian ground stations be used for comms or tracking of deep space spacecraft?
2
What radio frequency does China use to communicate with the Chang'e-4 satellite?
2
Will there be “Near Space” Ka-band allocations for TESS?

8
How many space-craft can a station on the DSN communicate with concurrently?
1
How does a third DSN station serves as a “relay” to tie-together observations by two other stations doing VLBI?
1
What kind of transmitters and antennas do the Lightsail-2 ground stations use?
3
What “gap” could have caused the Starliner instructions to be delayed?
6
Does NASA's Deep Space Network sometimes listen to other space agencies' spacecraft “just for the heck of it” or other non-mission related reasons?
1
Will future deep space optical communications “ground stations” actually be in space, or on the ground?
3
What is a Beam Waveguide dish and why do deep space communications stations use them?
4
Why are deep space “beacons” usually UHF, so low (in freq) that DSN can't hear them? And how unusual is it for a Mars lander to have an X-band beacon?