It's been more than 40 years since NASA launched Voyager 1 & Voyager 2. With more advanced technology, wouldn't it now be a good time to continue sending more sophisticated Voyagers out there? Wouldn't it be a good way to gather more data? It would increase the chances of letting them (if they exist) know about our presence.

Did NASA stop sending off probes?

NASA (and ESA) have created multiple outer planet probes. But they are costly and there is no reason to repeat what has already been done. So each mission has a different aim and purpose. Often this means not doing a fly-by, but getting the probe in orbit around the planet.

Uranus and Neptune have not been re-visited. They are very distant. Getting a probe out to them is possible. Getting something out to them in a reasonable amount of time and then getting it in orbit is much harder, and they are, perhaps, less intrinsically interesting than Jupiter and Saturn.

The voyagers did carry gold disks, but this was not a serious attempt to contact alien intelligence. It has a symbolic purpose. A record of humanity will exist somewhere in the galaxy long after we are gone.

Like James K's answer details, probes have been sent to the outer planets even after the Voyagers.

However, the specific trajectory used by Voyager missions has not been reused. In fact, it was the specific position of the planets that inspired the whole program, initially called the Grand Tour. 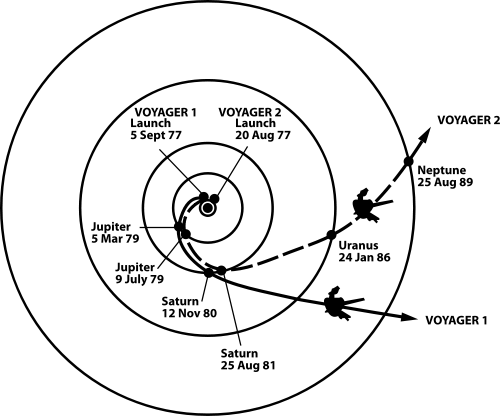 The relative position of the outer planets in their orbits in late 1970's allowed a space probe to visit many of them and to achieve great speeds using a sequence of gravity assist maneuvers. This position only repeats once every 175 years, so it is very likely that future space probes in 2150's will take advantage of it.

It's a question of science return on investment. As @JamesK's answer notes, NASA has done several orbiters since the Voyagers. You get greater ROI when your probe can stay near the body you're interested in and continue to observe it for a long time. The only Voyager type probe in that list is New Horizons, in the sense that Voyager type probes only do a flyby. In the case of Uranus, and points more distant, as @JamesK noted, it's extremely hard to get there in a reasonable time, and then slow down enough to enter orbit. So for them Voyager type probes have an advantage.

The Voyager probes cost 865 million USD, a number I believe is not inflation adjusted. Adjusting for inflation gives 3.6 billion USD. That compares to the cost of, e.g., the Extremely Large Telescope which is slightly over a billion Euros.

If you are the US government, how do you decide which project to fund? Chances are you'd ask the scientists to come up with ideas for what either project might discover, and then compare them to the costs. If the ELT is expected to produce as many results as the Voyager missions, it wouldn't make sense to fund the Voyager missions! Something like this is already what is being done: scientists propose projects, they are peer reviewed, and the consensus best ones get funded. Unfortunately the fact is, realistically, space probes are usually just not worth the money for the expected returns. It's for similar reasons that we've not sent more manned missions to the Moon or to Mars (I am confident that a manned Martian mission is possible with current technology, and the reason we haven't done it is because of $$$).

A fair question is why NASA sent out the Voyager probes in the first place. At that time, we didn't know as much about the outer planets, and going from 30% knowledge to 80% is a much larger improvement than going from 80% to 90% (these numbers are meant to be illustrative, not authoritative). Other reasons: these space missions capture the public imagination, which might make it worth doing anyway for publicity purposes (see Breakthrough Starshot, which is sending a probe to another star, something which is unlikely to be economically sensible also). Back in 1977 when the Voyager probes were launched, the US was in the midst of the Cold War. Space exploration was good for political points, making it more attractive. You can see from NASA's budget history that its budget then as a fraction of the federal budget was twice what it is today, and a few years before 1977 it was even higher (when getting Neil Armstrong onto the Moon was a Very Big Deal).

If you care about these space probes, support an initiative to increase NASA's budget. Example of such an initiative.

Not the answer you're looking for? Browse other questions tagged space-probe or ask your own question.

18
Why do space agencies invest more in flyby probes rather than orbiting satellites?
20
When is the next Outer Planet lineup (Voyager)
19
Are there any successors to Voyagers underway currently?