Would a debris field on Mars look like one on either the Earth or the Moon?

I am assuming there are no photographs, with enough resolution, of the any of the debris fields of Mars probes that crashed into the surface of Mars to indicate what the debris field looks like.

I am also assuming a crash of probes with the same kinetic energy, with flammable fuel, and the same angle of impact would look different on the Moon and the Earth. I make this assumption with the idea that an atmosphere plays a part in what a debris field looks like (please correct me if I am wrong on that one).

I was assuming a Mars debris field would look closer to a Moon debris field. Is that logical?

We actually do have a few cases of documented impact sites of artificial probes on Moon, Mars, and Earth:

On the moon there is no atmosphere to slow an impacting spacecraft down, so the spacecraft, if not at least attempting to break will be traveling with the moon's minimal orbital velocity of $1.68\,\frac{km}{s}$. There have been a few intentional impactors, but two in relatively recent times that have been imaged from orbit. Both from LRO: 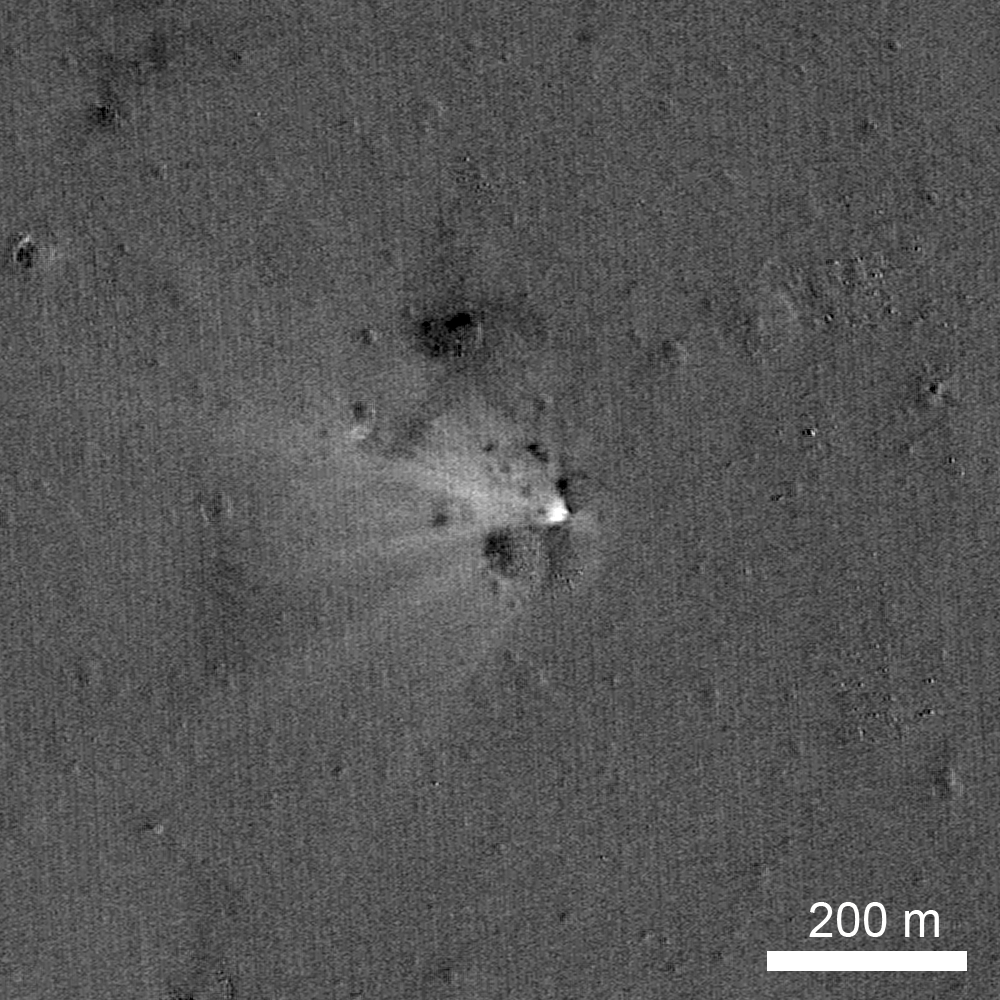 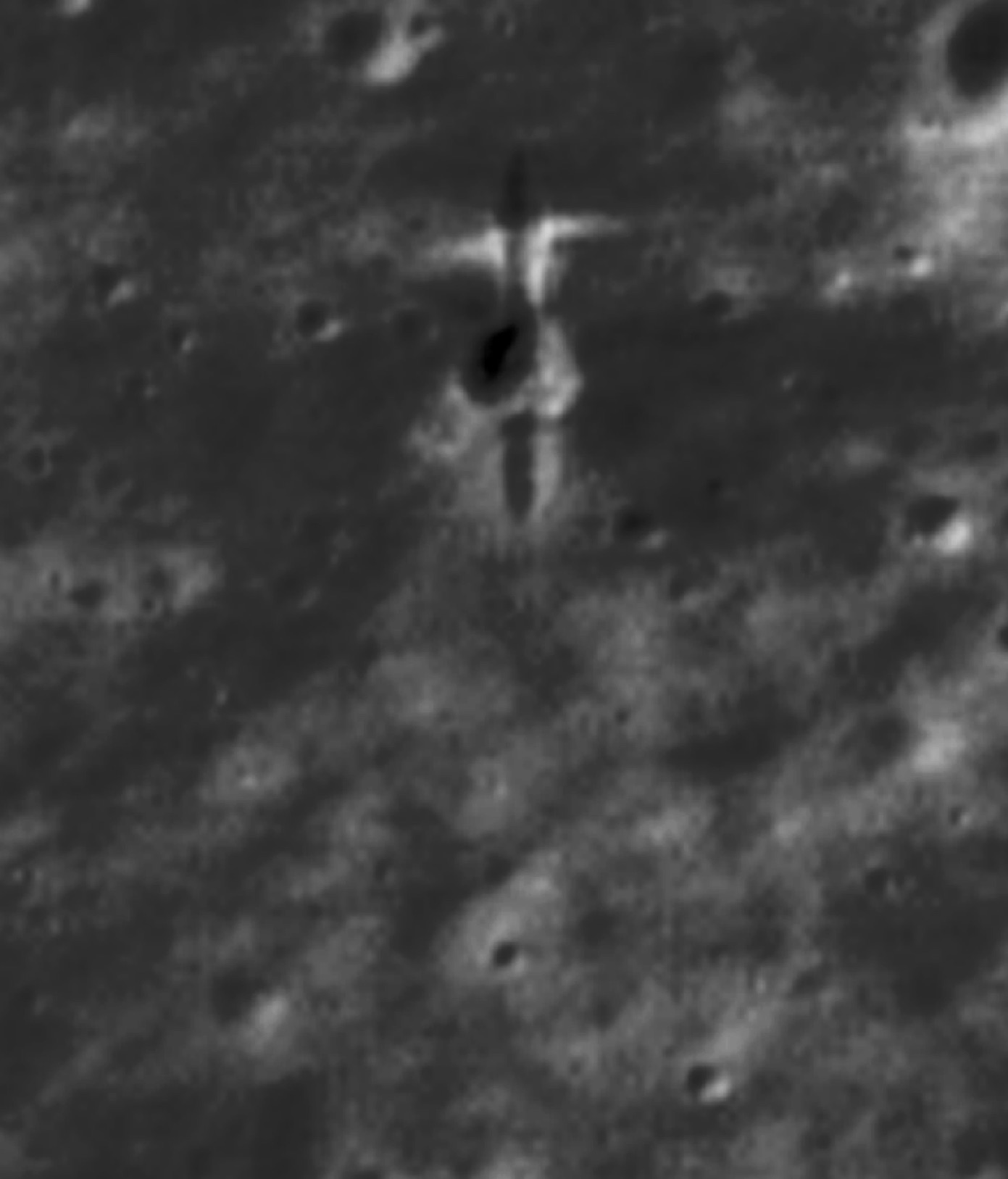 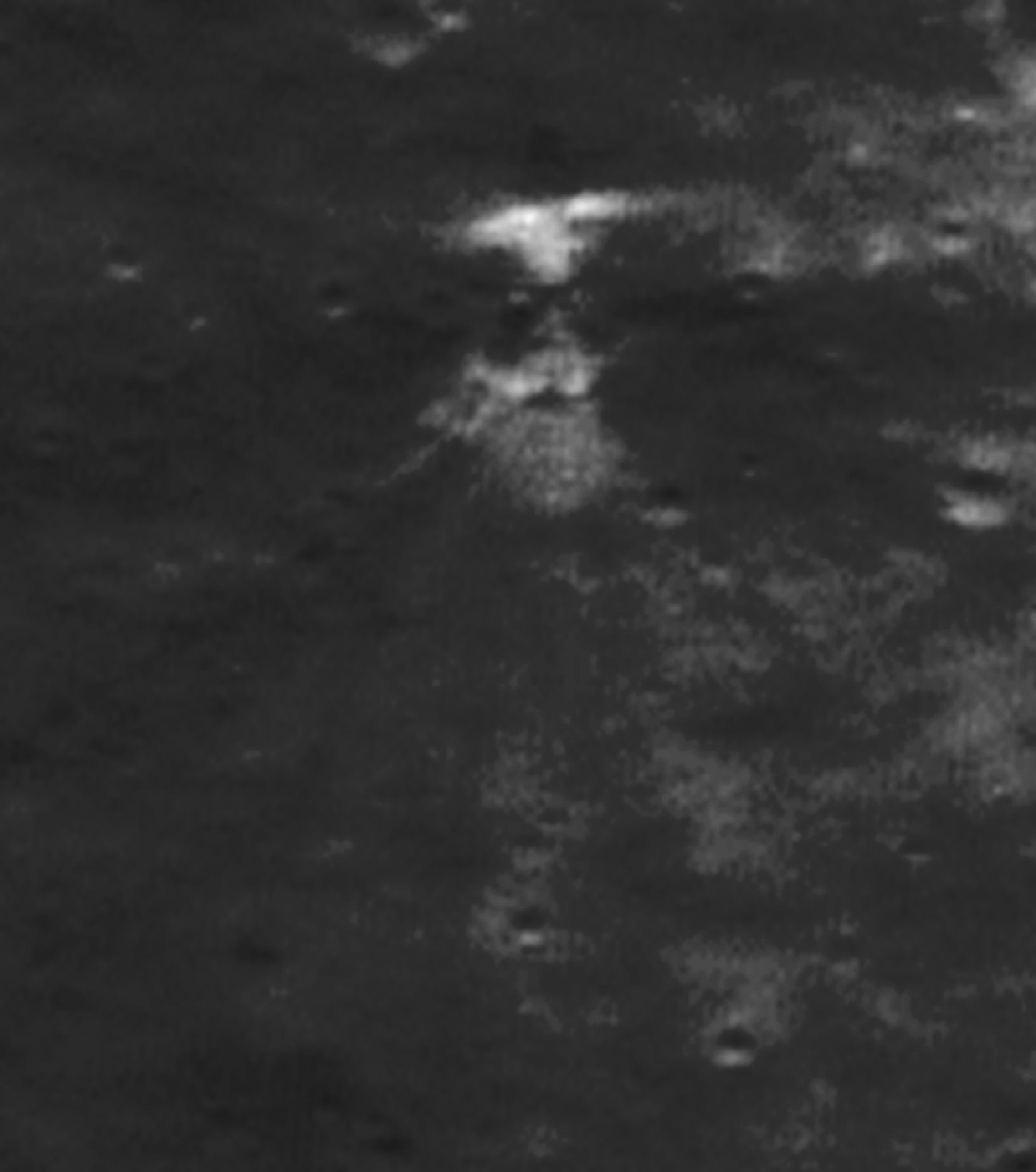 The first image is of the impact of the LADEE probe, which was about $2\,m$ long, the second and third are of the SMART-1 probe, about $1\,m$ long.

Both images show clear ejecta streaks and impact crators, but not a whole lot of debris. Both had an impact velocity of around $1.8\frac{km}{s}$. Not much of the spacecraft seems to be left. Traces of metal and other artificial materials can probably be found, but not a whole lot of recognizable structure. But it is hard to make out the details from that altitude.

There have been multiple kinds of impacts of probes on Mars that we have imaged:

ESA's Schiaparelli EDM lander performed a nominal entry into the Martian atmosphere, but due to a sensor malfunction jettisoned its parachute too high, firing the thrusters for too short and dropped onto the surface from $3.7km$. It crashed with about $0.15\frac{km}{s}$, also being around $2m$ in size. The heat shield (top right) and parachute (lower left) appear to have reached the ground nearly intact (they behave a bit more like a piece of paper: big surface area, but little thickness, thus dropping slower), but the lander (top left) has been spread across the landscape. It also shows clear ejecta streaks and a crater of approximately the size of the craft. In this picture however there might be some spacecraft fragments that are visible (the light spots around the image). They might be just image noise, but it is likely that some pieces survived the impact.

Opportunity had the unique opportunity (get it) to actually image its heatshield that had impacted Mars after separation. It's impact is probably comparable to that of Schiaparelli's components. Both should have reached their respective terminal velocities upon impact. In the picture you can see that the impact crater is quite shallow and that the heat shield is mostly intact (or in big pieces). It however did not contain any fuel.

This is probably similar to what happens to most artificial objects entering Mars: if they survive the entry they impact with something close to terminal velocity.

Some first stages of rockets (that up until now never reached orbit) have come back down to Earth rather intact. In the image is Britain's Black Arrow launch vehicle. This specific one crashed onto the ground. The Saturn V's F1 Engines actually hit the water in such a way that the could be recovered. 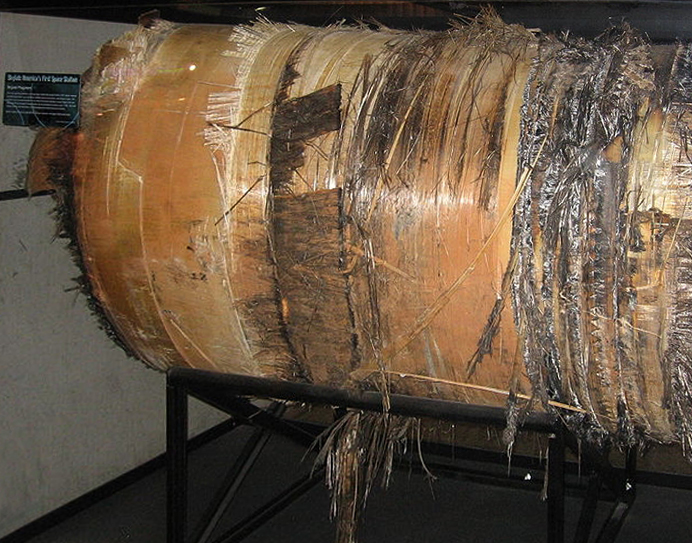 Pieces of the Skylab Space Station survived reentry in such a way that big pieces could be recovered and be recognizable. Some tanks from rocket second stages also made it.

Not the answer you're looking for? Browse other questions tagged mars the-moon earth or ask your own question.

8
What happens to a spacecraft crashing into the Moon?
2
What does it (actually) mean when spacecraft are "intentionally crashed" on the moon?
11
What would the human gait look like on Mars?
6
What would the full hypothetical Mars terraforming roadmap look like?
8
Could an Apollo mission be possible if Moon would be Earth like?
1
Is the night sky on Earth different from the night sky on the moon or Mars?
5
Why did NASA intentionally crash-land the Curiosity and Perseverance sky cranes on Mars?
8
What does the Moon's gravity feel like? If you don't move, could you still tell you're on the Moon?