Where on Mars did the largest river once flow?

It is generally accepted that once there was running water on the surface of Mars.

Can it be determined from remote sensing data from space where the biggest, largest and longest ones were?

I suggest that the Valles Marineris–Chryse Planitia complex is the largest former Martian river system.

Valles Marineris has many features that appear to have been created by water flow and the outflow channels leading from it to the former oceana,b,c,d,e,f in Chryse Planitia are clearly visible and bear many features in common with river systems on Earth.

Although Valles Marineris bears a striking similarity in structure to the Grand Canyon on Earth, its probable primary formation mechanism1 is currently believed to be "rifting, strike-slip faulting, [or] subsurface mass removal."g2 That said, there is clear evidence for the historical presence of liquid water within it3. Some authors have posited the existence of meltwater-/spring-fed lakesh,4 in Valles Marineris while others have shown evidence of long-term precipitation feeding into the valleyi; either mechanism could support outflow rivers into Chryse Planitia over extended periods of time. Other authorsj,k,l disagree and say that the outflow channels were created by cataclysmic outburst flooding via dam failure5 with geothermally-melted subsurface icel being suggested as a water source for the impounded lakes. Said lakes would have been located within Valles Marineris. The actual mechanism is likely to have been a combination of the aboveh.

Regardless of the mechanisms and timescales involved, I suggest that with a total length in the neighborhood of 5,000 km, the Valles Marineris–Chryse Planitia complex is the largest former river system on Mars. Its route and structure can clearly be seen in remote-sensing data (see image below).

1 At least at the large scale. Smaller features such as the inflow valleys as well as general erosion may well have been created via hydraulic action. Some authorsl, however, do posit a purely hydraulic genesis for the valley. The overwhelming consensus though is that the outflow channels to the east and north-east were created entirely by flowing water.

3 The primary source of contention is the precise mechanism(s) leading to liquid water having being present in Valles Marineris.

4 Note that said lakes are unlikely to have come anywhere close to filling Valles Marineris to the brim.

5 Evidence of cataclysmic outburst flooding can be seen on Earth in, e.g., the Channeled Scablands of south-eastern Washington State (USA) that were created by the repeated catastrophic failures of glacial ice dams holding back Lake Missoula.

6 The zero altitude or "sea level" on Mars was previously defined as being the elevation at which there is 610.5 Pa of atmospheric pressure. This pressure corresponds with the triple point of water; given sufficient temperature, pure liquid water7 can potentially exist below this elevation. In 2001 newly-acquired laser altimetry data (from MOLA) was used to set a more precise datumm. The 610.5 Pa pressure is found at approximately -1.6 km relative to the new datum (the precise value varies by 1.5 to 2.5 km depending on location and season). The map shown is based on MOLA data and uses the newer datum (the approximate level of the old datum is green on the map).

7 Salt water and brine can be liquid at lower temperatures than pure water. 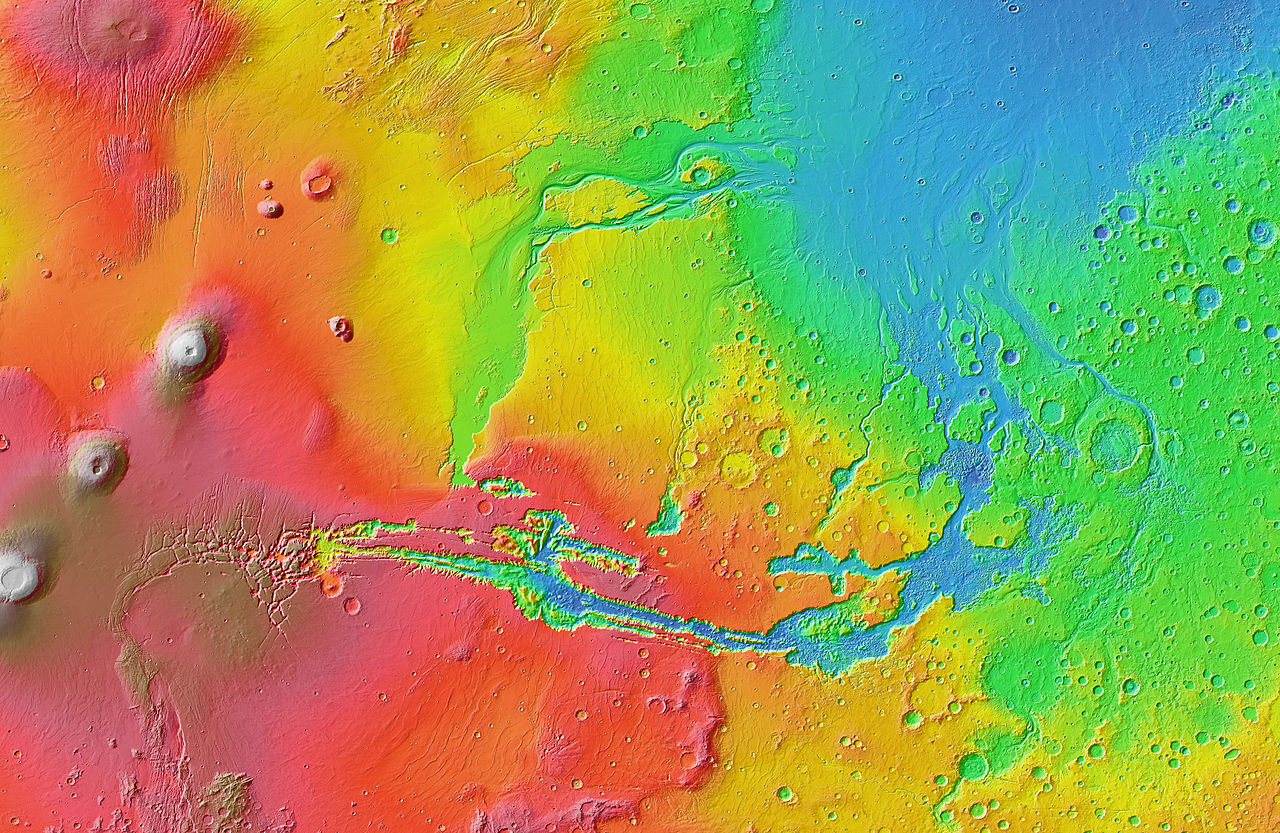 a Linda M.V. Martel (2001), Outflow Channels May Make a Case for a Bygone Ocean on Mars, Hawai'i Institute of Geophysics and Planetology, http://www.psrd.hawaii.edu/June01/MarsChryse.html, web page, retrieved 2018-12-23.

A strong candidate for largest river on Mars that I have found is the Kasei Valles region of Mars.

According to the Wikipedia entry, this area is home to a geological feature similar to our famous Grand Canyon. . . except for one major difference. This guy is 300 miles wide at maximum instead of 18 miles. 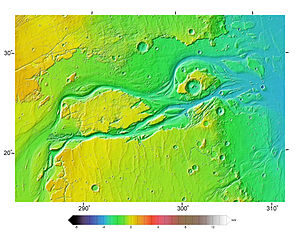 Channels extend many hundreds of kilometers in length and are typically greater than one kilometer in width; the largest valley (Kasei Vallis) is around 3,500 km (2,200 mi) long, greater than 400 km (250 mi) wide and exceeds 2.5 km (1.6 mi) in depth cut into the surrounding plains. These features tend to appear fully sized at fractures in the Martian surface, either from chaos terrains or from canyon systems or other tectonically controlled, deep graben, though there are exceptions.

This huge system is 300 miles wide in some places. In contrast, Earth's Grand Canyon is only 18 miles wide. It is one of the longest continuous outflow channels on Mars. The Kasei Valles system begins in Echus Chasma, near Valles Marineris. It then runs northward, and appears to empty into Chryse Planitia, not far from where Viking 1 landed. At around 20° north latitude Kasei Valles splits into two channels, called Kasei Vallis Canyon and North Kasei Channel. These branches recombine at around 63° west longitude, forming a large island in the channel known as Sacra Mensa. Some parts of Kasei Valles are 2–3 km deep.

Like other outflow channels, it was likely carved by liquid water, possibly released by volcanic subsurface heating in the Tharsis region, either as a one-time catastrophic event or multiple flooding events over a long time period. Others have proposed that certain landforms were produced by glacial rather than liquid flow.

These are all quotes from Wikipedia. . . I am just now learning of the Martian Grand Canyon.

There are bigger chasms on Mars. . . but he specifically asked about rivers. Valles Marineris is a much deeper chasm possibly having housed lakes or oceans — this was likely formed by tectonic activity then deepened by water and carbon dioxide flow. This means that it was not formed by river flow exclusively, and likely was never full.

Not the answer you're looking for? Browse other questions tagged mars water geology remote-sensing or ask your own question.

5
Running salt water on Mars, hype or not?
9
Are the surfaces in permanent shadow in Moon craters 'fluffy'?
4
Mars and the missing carbonate. Did Mars once orbit closer to the Sun?
4
What are the technologies that can identify, validate, and quantify water-rich locations on Mars?
8
Why is the northeastern region of Syrtis Major Planum a selected landing site for the Mars 2020 mission?
6
Where is the “almost certain” water in these spectra from Chandrayaan 1's Moon Mineralogy Mapper?