What is the most aerodynamic Satellite?

From what I understand at least in the lower orbits you want the least amount of drag possible.

My brain is telling me that a long pole or submarine shape satellite orientated to the direction of travel or direction of solar wind would be best and not a ball at all?

At what point does the extra weight and mass to make a satellite aerodynamic cost more fuel then saved?

The only satellite I know of that was shaped to have low drag was GOCE, which orbited at 250 km.

Since it was vital to ensure that the measurements taken are of true gravity and not influenced by any movement of the satellite, this unique five-metre long arrow-shaped satellite had none of the moving parts often seen in other spacecraft. The satellite, together with its instrumentation, actually forms a single composite gravity-measuring device.

The satellite orbited Earth as low as possible to observe the strongest possible gravity-field signal – hence GOCE was designed to skim the edge of Earth's atmosphere at a height of about 250 km. Low fuel consumption meant that its altitude could be lowered to 235 km in 2012.

An electric ion thruster at the back of the satellite continuously generated tiny forces to compensate for any drag that GOCE experienced along its orbit.

The need to fly low and be ultra-stable led to a novel satellite design that minimised air drag and torque and excludes mechanical disturbances. The result was a slim 5 metre-long satellite with a cross sectional area of about 1m2, weighing in at about 1050 kg. The satellite was symmetrical about its horizontal plane and had two winglets that provided additional aerodynamic stability. 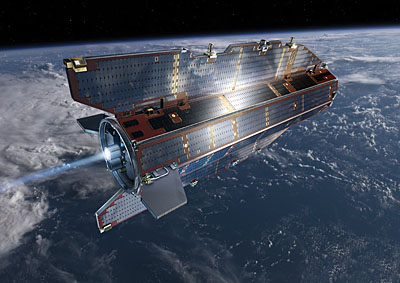 You can see this places constraints on the satellite's shape: you can't have protruding solar panels, antennas etc. This means it's only done when really necessary; for most purposes it's much cheaper to go to a slightly higher orbit instead.

Not the answer you're looking for? Browse other questions tagged artificial-satellite design aerodynamics drag or ask your own question.

1
Technological challenges to sending a high altitude balloon to space and orbit from 50 km?

9
If not constrained by underpasses, etc., would Falcon 9 have been less of a flying noodle?
1
What is the most likely range of orbits for on-orbit servicing satellite?
9
Why are stages not connected by the engine nozzle? Why are interstages used?
2
During their climb, when did/do the SpaceShipOne and Two pilots lose all or most of aerodynamic control over the spaceplane?
5
How to fit, into a cubesat, 29 trackable high drag subsatellites with well-defined aerodynamic profiles
6
Exactly how “Ferrari-like” was GOCE? Was its drag coefficient as low as the car's?
6
What benefit do the aerodynamic stabilization “pods” on the PSLV-CA provide?