Could an alloy of hot or cold liquid metal be made magnetic by adding electricity to the molten ball to give it magnetic properties to wirelessly attach it to a space craft to use as a shield shown in the 3rd picture? 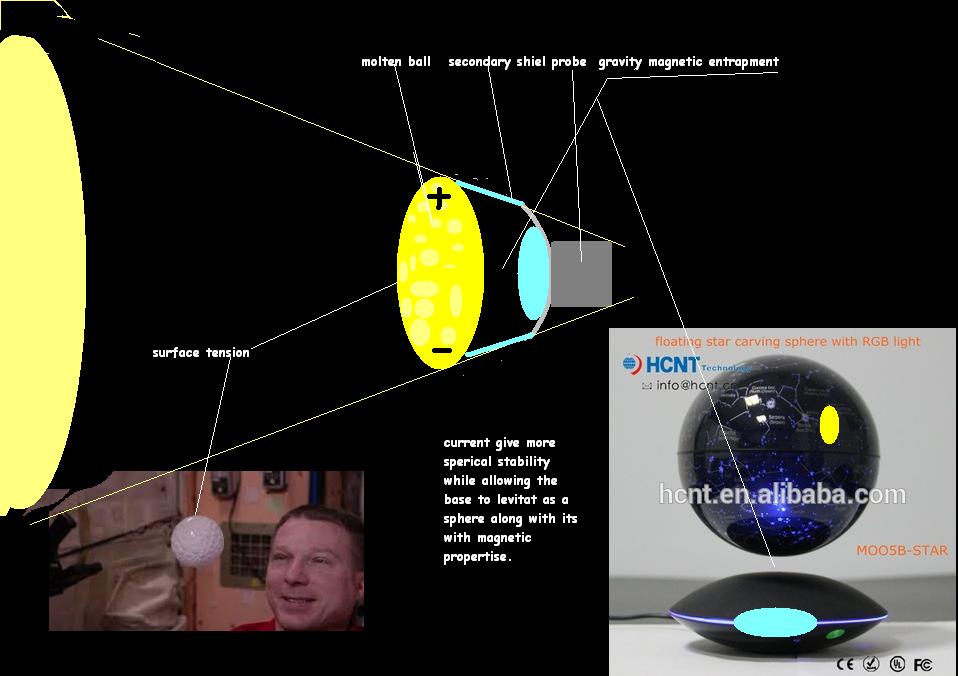 Could liquid metal be made ferromagnetic by externally inducing an internal magnetic field?

No. Metal is either ferromagnetic or not; this is a result of the quantum-mechanical interaction of neighbouring atoms in the metal's crystal lattice. Even non-magnetised iron at room temperature is ferromagnetic, only, the Weiss domains are randomly oriented and mostly cancel out, which can be changed by applying an external field to orient them all in the same direction. Most other metals aren't ferromagnetic and an external field can't do anything about this: there are no magnetic domains that you could align in some way. And as Uwe commented, even the ferromagnetic metals are only ferromagnetic below the Curie temperature. This always lies below the melting point, so no: liquid metals can not be made ferromagnetic.

Regarding ferrofluids: yes, those are ferromagnetic liquids, but they aren't liquid metals. In vacuum, the carrier would quickly freeze and/or evaporate.

But I don't think that's really what you meant to ask anyway: ferromagnetism is not the only way metals can interact with magnetic fields. There are three other mechanisms:

So, induction is your best bet. Could this be used to form a shield? Possibly. In fact fluid conductors have a natural tendency to form sheet-like structures. Whether this is practical is dubious, but it's in principle a worthwhile idea.

Not the answer you're looking for? Browse other questions tagged spacecraft interplanetary the-sun shielding design-alternative or ask your own question.

11
How can I shield against micro-meteors?
13
Does NASA have spacecraft that are specifically made for orbiting around the Sun?
9
How thick must a shield be to be better than no shield at all?
1
Could BNNTs be used for Whipple Shield designs?
8
Can you avoid the costs of cooling superconductors for magnetic shields by separating them from the spacecraft and using shades?
2
What is the shielding capability of liquid metal compaired to solid metal?
2
Thrust value for a metallic hydrogen rocket-propelled spacecraft traveling on brachistochrone trajectories?
3
One mothership and many droneships concept for interplanetary travel