Puzzler: Precisely what maximum distance from the Earth did the Apollo 13 astronauts achieve?

quote Wikipedia to state that the Apollo 13 astronauts reached 400,171 km from Earth.

I'm not able to reproduce that value.

Just in case I entered something wrong using the Horizons interface, I've double checked the numbers with Skyfield on DE421 and go the same thing except for about 100 meters because the times scales are slightly different due to accumulated leap seconds. Note these distances are not light time or otherwise corrected, they are just the differences in positions.

The flight passed the far side of the Moon at an altitude of 254 kilometers (137 nautical miles) above the lunar surface, and 400,171 km (248,655 mi) from Earth, a spaceflight record marking the farthest humans have ever traveled from Earth.

Question: I don't know how to combine the Horizons distances, the radii of the Earth and Moon, and the reported altitude in order to get to 400,171 km. Can someone help?

Secondary item is that the 2nd Wikipedia quote gives the maximum at 00:21 UTC but that seems to be the time of entry into occultation, not the midpoint 12.5 minutes later, that could be a clue, or just an oversight.

The Wikipedia article on Apollo 13 disagrees with itself. In the main text of the article it says: 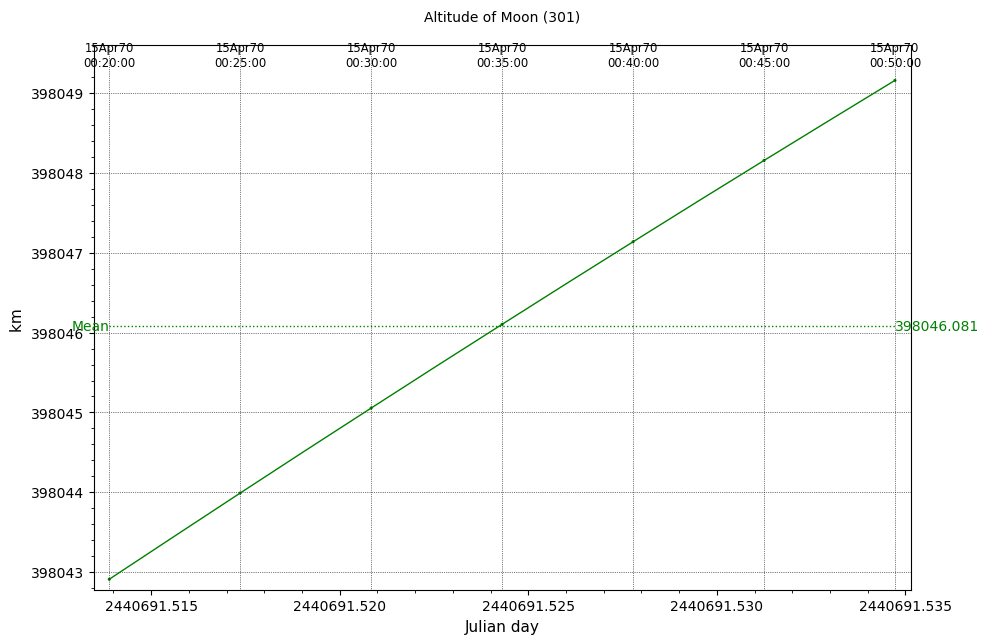 Here's a table of all the quantities of interest calculated by the script at 0:35 April 15 TDB.

Let's start with the easy bits. The distance from the center of the Moon at the far point. The max distance that the Moon was from Earth was actually at the exit point. The exact distance involves some complex geometry. Another thing to keep in mind is the Earth and Moon are not exact spheres, the radius can vary quite a bit. The Earth's actual radius can vary between 6353-6384 km depending on exactly where you are, it is less towards the poles. The Moon's similarly can vary between 1736-1738 km. Thus whatever value we give could be off as much as 33 km, depending on which point of Earth/ the Moon we are talking about.

The distance should be (dMoon_Earth)-rE+rM+dA13. Let's use the values that will give the largest number for all of these, and we get 400,061 km, which is still less then the reported value. This would assume the min distance from the Equator of Earth (Unlikely) and the equator of the Moon (Likely).

Interestingly enough, the NASA article cites the Guinness Book of World Records as the source it uses. Other sources give even higher numbers, such as 401,056 km.

My guess is that they picked the distance to a point on the Earth, but not necessarily the closest point to Earth. A point on Earth that wasn't directly in the line of closest approach would give a slightly larger value, as is seen.

Screenshot of the Apollo 13 trajectory's orbital elements around the Moon, published in NASA's article Apollo 13 Moon View Using LRO Data.
Here we see that the shortest distance of the Apollo crew to the Moon's centre (pericynthion) was 1988.8 km on April 15, 1970, 00:33:57 UT.
(According to Wikipedia a reconstruction of the trajectory by Daniel Adamo records the furthest distance at 00:34:13 UTC)

Above is a screenshot of the ephemeris (R.A. and DEC) of the Moon produced by Horizons Web Application also showing the distance from Earth to the Moon (delta).
It shows that on April 15,1970 00:34:00 UT that distance was 404460 km.

The screenshot also shows that at that time the declination of the Moon was about 20.3⁰ so the shortest distance to the Moon on Earth's surface happened at 20.3⁰ latitude.
From a diagram in Wikipedia's article about Earth's radius we can deduce that at 20.3⁰ latitude the geocentric radius is about 6376 km.

61
What is the closest distance a human being has come to Mars ever since the beginning of the space age?
45
Without the accident, would Apollo 13 still have been the farthest crewed mission from the Earth?
19
How far have astronauts been in space?
27
If I wanted to reconstruct an entire Apollo mission's crewed spacecraft trajectories, what are the key sources of historical data I'd look for?
18
Who has been the closest to/furthest from the Sun?
19
Which astronaut travelled farthest from Earth?
9
What is the velocity of the ISS relative to the Earth's surface?
14
Apollo 10: Where's Snoopy?
7
Astronaut distance from Earth?
5
Why is there a 38.6 km Earth-Moon distance difference between Ephemeris types "Observer table" and "Vector table" on Horizons Web Application?
See more linked questions

31
Orbiting Earth before heading to Moon
22
What exactly turned on the light indicating Apollo 8 was starting to fall towards the Moon?
9
What's the record for the fastest trip to the Moon?
45
Without the accident, would Apollo 13 still have been the farthest crewed mission from the Earth?
1
What was the furthest distance from Earth that Armstrong, Aldrin, and Collins reached in Apollo 11?
12
What distance did the Apollo CSM go before turning round to pick up the Lunar module?
7
What is the furthest from Earth that a military spacecraft is thought to have been intentionally deployed or moved to?
1
How can I find Inclination and Longitude of ascending node for the Moon on JPL's Horizons?
2
Will astronauts on the Lunar Gateway beat the record Apollo 13 set for furthest distance from Earth?