On Apollo 15, 16, and 17 NASA filmed the Lunar Module taking off and leaving the moon. With no-one on the moon how could the the camera move to follow it and who brought the exposed film back to Earth?

They didn't use film for this. A video camera was installed on the Lunar Rover Vehicle. This camera could be controlled from Mission Control and it could send its video directly to Earth.

It depends on which "film" and mission you are referring to. (The original question referred to "the first moon landing". Later edits refer to the last 3 landings.)

For the first moon landing, Apollo 11, the lift off was filmed with a motion picture camera inside of lunar module looking out the window. Obviously they carried that camera home with them and develop the film after returning to Earth. (The landing was filmed the same way: camera pointing through the window.) 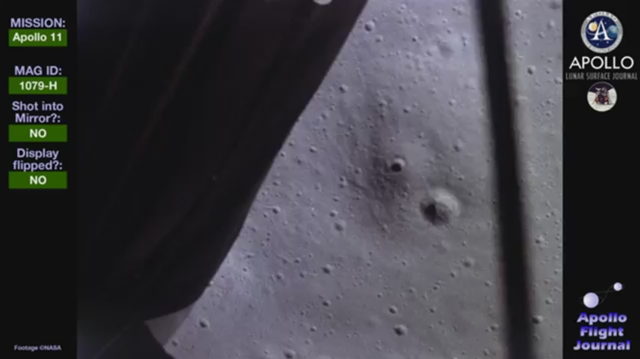 Above screen capture of Apollo 11 lift-off from this video, filmed from inside the lunar module

For the last three missions, Apollo 15, 16, and 17, those were recorded from the TV camera on the lunar rover and used video transmission. No film and no processing was involved. 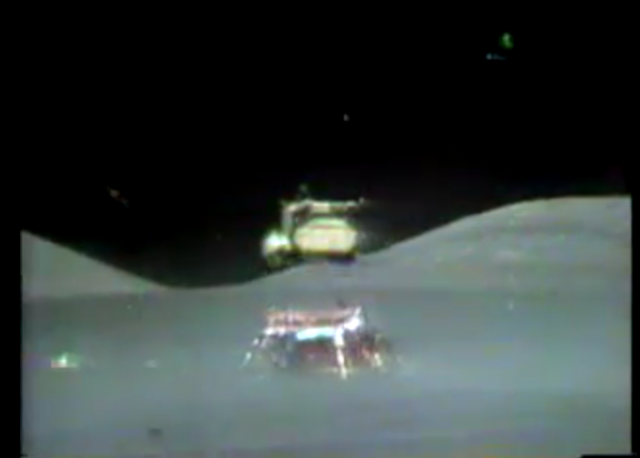 Above screen capture of Apollo 17 lift-off from this video, recorded from the rover by remote control

Elizabeth Howell — Universe Today 12/16/14 11:20am https://io9.gizmodo.com/how-nasa-captured-this-iconic-footage-of-apollo-17-leav-1671650186 provided the explanation also supplied by Uwe, above. It was a live TV/video feed from the LRV (lunar rover). Repeated on several missions.

Edit 22 July 2019 - Quotes from link provided to complete this answer so information is not lost due to link rot.

When Apollo 17 lifted off from the moon 42 years ago this week, a camera captured the movements of the spacecraft — even though nobody was left behind to, say, establish a lunar base.

... a camera on the lunar rover that could be controlled — or even programmed — from Earth

Now, the way that worked was this. Harley Weyer, who worked for me, sat down and figured what the trajectory would be and where the lunar rover would be each second as it moved out, and what your settings would go to. That picture you see was taken without looking at it [the liftoff] at all. There was no watching it and doing anything with that picture. As the crew counted down, that's a [Apollo] 17 picture you see, as [Eugene] Cernan counted down and he knew he had to park in the right place because I was going to kill him, he didn't — and Gene and I are good friends, he'll tell you that — I actually sent the first command at liftoff minus three seconds. And each command was scripted, and all I was doing was looking at a clock, sending commands. I was not looking at the television. I really didn't see it until it was over with and played back. Those were just pre-set commands that were just punched out via time. That's the way it was followed.

Could also use long range antennas.

Not the answer you're looking for? Browse other questions tagged the-moon apollo-program lunar-landing or ask your own question.

13
How did the Perseverance rover land on Mars with the retro rockets apparently stopped?
21
How did NASA get the video camera on the Moon to track the LM ascent stage, considering the substantial delay?
29
How was the Apollo lunar liftoff video transmitted to Earth?
4
What is the model name of video camera that filmed the lunar lift-off?

4
Why only 12 men have made lunar-walks and not all 18 men?
23
How was it possible for the Apollo 11 to film and take pictures with such radiation?
6
Using command module as a lander
25
How did Apollo-12 manage to land next to Surveyor-3? First "Space-Tourists"?
29
How was the Apollo lunar liftoff video transmitted to Earth?
24
How exactly did the floor of an Apollo LM look like after EVA(s)? Seeking photo!
5
How many different kinds of insulation film are wrapped around the Apollo Lunar Module?
4
Did any Apollo missions have enough fuel left to bring back the LM ascent stage?
14
How did the lunar module avoid problems with flying regolith when taking off?
13
What kind of signals and encodings were used to send tilt/pan commands to TV cameras on the Moon (up through Apollo)?