Did New Horizons use its smaller medium-gain antenna for most/all downlinking of Pluto and Arrokoth flyby data?

Brian May's New Horizons video (below) was released at about the same time that the New Horizons spacecraft passed 2014 MU69 Arrokoth and includes a lot of technically meaningful graphics.

One item is the illustrating of downlink and uplink of data, shown as a narrow blue beam and wide green beam, respectively.

This answer to Function and nature of the RHC/LCH pair of cables to New Horizons's dish antenna secondary mirror? shows that the backside of the secondary mirror of the high gain antenna also has a small primary dish forming the medium gain antenna. 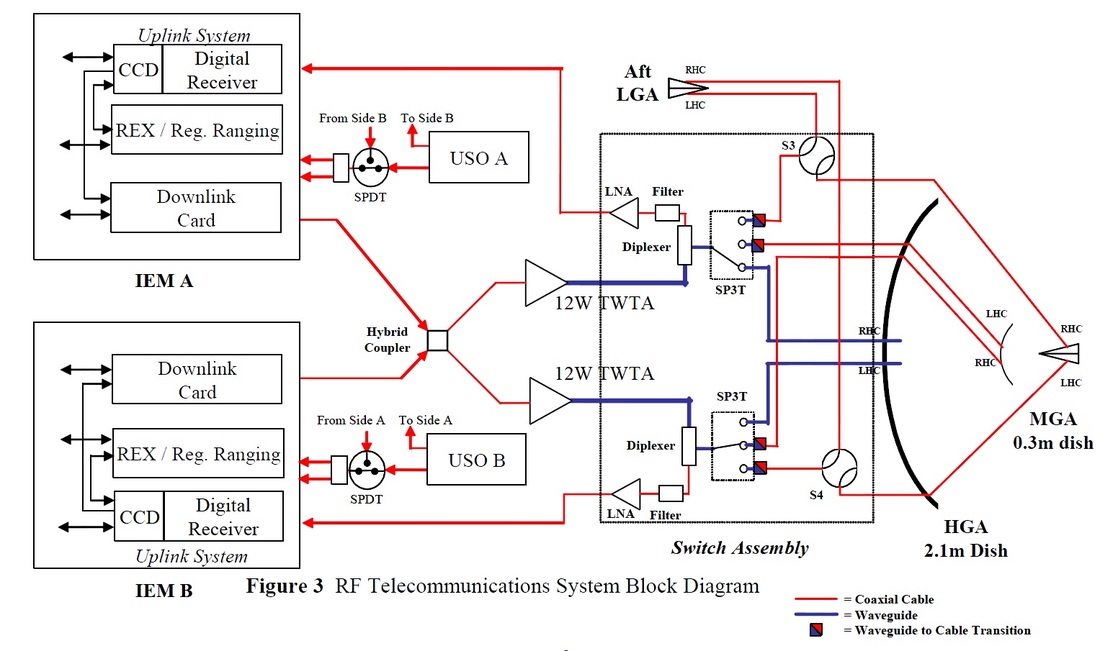 No. The mission is designed to use the HGA to downlink data. The MGA is used for uplinks, and for emergencies.

The ability to command through the medium gain antenna (MGA) out to 50AU for the extended mission sets the MGA receive gain.

That was just for artistic purposes. The HGA was used for both uplink and downlink throughout both Pluto and MU69 encounters.

To go beyond @Hobbes' answer, let's look at this quantitatively.

From the OP's linked Spaceflight 101 article, Wikipedia's New Horizons: Telecommunications and data handling this and this answer, and recall from various DESCANSO publications.

The advantage of specifying that New Horizions be able to receive instructions on its medium gain antenna out to 50 or even 100 AU rather than only its high gain antenna are several.

It turns out that the smaller receive antenna of New Horizions and (presumably) room-temperature front-end is compensated by the higher 1000x higher transmit power from DSN. (DSN dish gain appears in both link calculation so it cancels). Below is a very rough calculation and could easily be off by a half-dozen dB, but it's good enough to see why this works.

11
Why doesn't thermal radio emission from a DSN "hot dish" completely swamp the benefits of a cold LNA?
13
How to calculate data rate of Voyager 1?
5
Why does NASA use higher frequencies even though they have worse Free Space Path Loss (FSPL)?
2
Function and nature of the RHC/LCH pair of cables to New Horizons's dish antenna secondary mirror?
2
How low does OSIRIS REx's record-setting orbiting around Bennu go?
1
What do all these vectors point to in this New Horizons trajectory/operations simulation?

9
How (the heck) can 2014 MU69's orbit be know well enough for a close flyby by New Horizons?
5
The appearance of TESS' dish seems to be evolving, what will be the final configuration?
9
How does Curiosity know how to point and move it's high gain antenna in real time?
1
How does this antenna work, with both a feed horn and hyperbolic secondary in front of the dish?
2
Function and nature of the RHC/LCH pair of cables to New Horizons's dish antenna secondary mirror?
1
What do all these vectors point to in this New Horizons trajectory/operations simulation?
3
What is a Beam Waveguide dish and why do deep space communications stations use them?
9
What is the pop-up circular disk with spiral pattern in this NASA animation of the Dragonfly helicopter for Titan? Antenna? Kind, band, target?
1
How does a 22 dBi X-band "patch" antenna get so much gain and how well behaved is its high-gain radiation pattern?