At what time in the Apollo 14 mission did the maneuver shown in this image happen, and what exactly was happening?

In a search for information for this answer I received this google books link of Comment: The Relevance of Space, by Arthur Kantrowitz, Bulletin of the Atomic Scientists 197, 4 April 1971, pp 32-33. It includes the image below, I've retyped the caption for easier reading.

At roughly what time in the Apollo 14 mission was this, and what does "capsule separating from the S4B" really mean in terms of the "unpacking of Apollo" sequence that Walter Cronkite explained on TV holding those models in front of the camera years ago but I still can't quite understand? 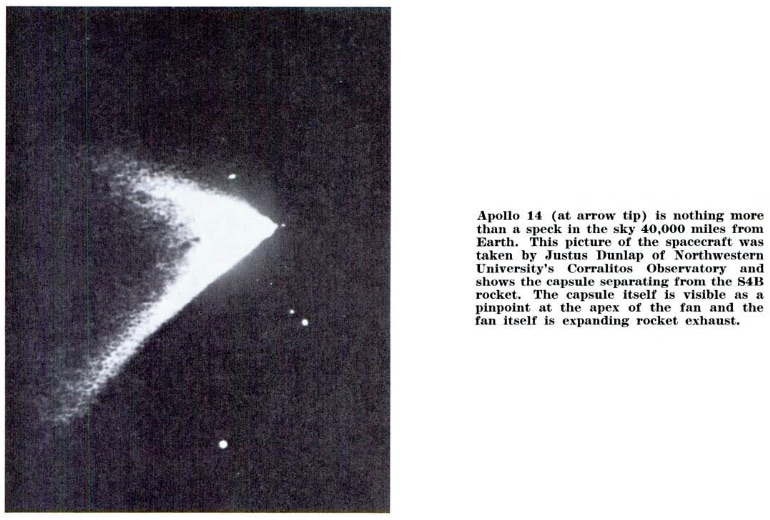 Apollo 14 (at arrow tip) is nothing more than a speck in the sky at 40,000 miles from Earth. This picture of the spacecraft was taken by Justus Dunlap of Northwestern University’s Corralitos Observatory, and shows the capsule separating from the S4B rocket. The capsule itself is visible as a pinpoint at the apex of the fan and the fan itself is expanding rocket exhaust.

The S-IVB was the third stage of the Saturn V rocket, which took astronauts to the moon.

The S-IVB ignited its engines in the upper atmosphere, to push the rocket into low Earth orbit, where it would sit for a few hours as the crew prepared for the trans-lunar injection (burning towards the moon so that they can leave the Earth).

This video has a good explanation of the whole mission, and the specific part you're talking about is at 2:30.

According to the timeline for events of the Apollo 14 mission (history.nasa.gov), the command and service modules separated from the S-IVB at 3:02:29.4 after launch, which was about 28 minutes after the trans-lunar injection burn.

Not the answer you're looking for? Browse other questions tagged crewed-spaceflight apollo-program identify-this-object apollo-14 or ask your own question.

28
Reasons behind the "Transposition, docking and extraction" maneuver
7
Hijacked space data, notable instances of recovering images or other goodies from someone else's space mission?
6
How far away can spacecraft be seen with an optical telescope?
4
Why does the Apollo-8 Trans-Lunar Injection burn appear to be pulsing in this photo?

38
Why did Apollo mission numbering skip 2,3,4,5 and 6?
16
What is this on the craft from the Apollo 17 mission?
19
What was the approximate cabin temperature and humidity of the Apollo mission capsules?
8
How was temperature and humidity maintained inside the Apollo mission capsules?
2
How exactly does this Apollo astronaut's tool work? What was it called?
5
Help understanding this Apollo 11 docking probe image, what are we looking at, and from where?
3
What kind of camera was used to produce this Apollo-era footage of the Earth?
1
Which Viking-1 orbiter photo is this? When was it taken and what part of Mars is shown?
2
What mission is this Chris Hadfield photo associated with and what is the location? And what is that thing?
2
Which two spacecraft are being shown disconnecting here, and what was the connection for?