How exactly will OSIRIS-REx's Navcam be used to navigate?

This remarkable, tweeted OSIRIS-REx image is described in AsteroidMission.org's NavCam Image of Earth, the Moon, and Bennu

The particular camera is called a NavCam, and yet it will be used during the touch-and-go maneuver where OSIRIS-REx is planned to contact Bennu (with an arm) and collect a sample of the surface.

How exactly will this navcam be used to navigate? What kind of navigation? Star cameras are generally used for attitude control, which is important when navigating but isn't the same thing.

On Dec. 19, OSIRIS-REx used its NavCam 1 camera to capture this image of three familiar planetary bodies: asteroid Bennu, Earth, and the moon. Despite the spacecraft’s distance from home – about 71 million miles (114 million kilometers) – Earth and the Moon are visible in the lower left due to the long exposure time used for this image (five seconds). The spacecraft’s range to Bennu is only about 27 miles (43 kilometers), so the asteroid appears highly overexposed in the upper right. The head of the constellation Hydra is also visible in the lower right portion of the image.

NavCam 1 is a black-and-white imager that is one of three cameras comprising TAGCAMS (the Touch-and-Go Camera System), which is part of OSIRIS-REx’s guidance, navigation, and control system. TAGCAMS was designed, built and tested by Malin Space Science Systems; Lockheed Martin Space integrated TAGCAMS to the OSIRIS-REx spacecraft and operates TAGCAMS. 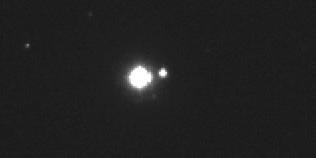 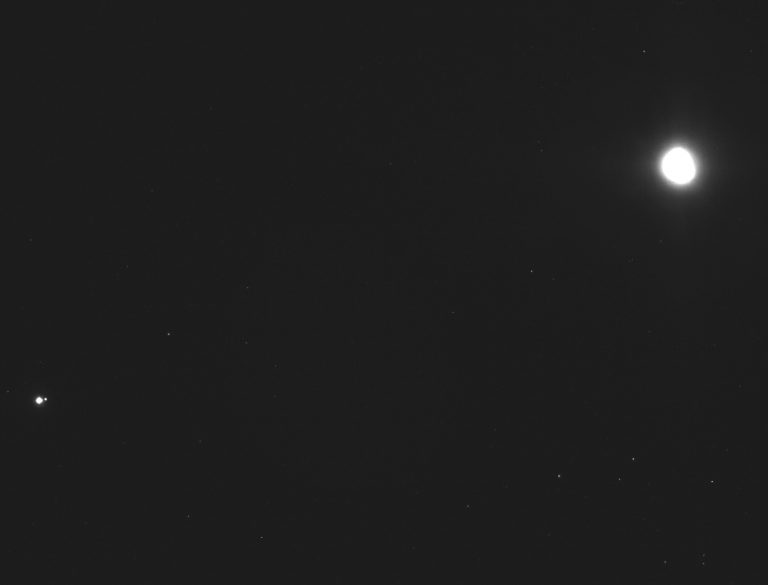 TAGCAMS is a suite of three engineering cameras: two Navcams and a Stowcam. They have the same pixel format (2592 by 1944) and the same wide field of view, 44 by 32 degrees. (Read more here.)

The Navcams have monochrome sensors and are focused at infinity. They are designed to image the asteroid and background stars down to 4th magnitude for navigation purposes. There are two for redundancy.

The Navcams are a backup for the LIDAR system. LIDAR is used to create a precise topography map of Bennu. A sampling site will be selected based on this map.

OSIRIS-REx has included onboard natural feature tracking (NFT) algorithms to process NavCam images as a backup to the lidar baseline. This offers two independent, onboard navigation techniques to meet all TAG requirements.

If NFT is used instead of lidar, the NavCam images that are collected are processed onboard to identify known surface features. The known features, as determined from ground tools utilizing a high accuracy asteroid shape model and the known TAG trajectory, are stored in a catalog and rendered onboard to represent their expected appearances. A correlation algorithm finds where the catalog features are in the images, and provides measurements to a Kalman Filter that estimates the orbital state of the spacecraft. The state estimate from NFT can be used with the same maneuver guidance algorithm to update the Checkpoint and Matchpoint burns.

On approach to Bennu, several cameras will be used to locate Bennu:

The approach phase of the OSIRIS-REx mission begins in August of 2018 with the initial attempt to optically acquire Bennu at 60 days prior to rendezvous with the asteroid.

The narrow-angle 0.8◦ field-of-view (FOV) PolyCam camera is used during this phase to acquire Bennu when the spacecraft is more than 2 million km out from Bennu. When the spacecraft reaches within 136 km, the 4◦ FOV MapCam is used to ensure the entire limb of the asteroid with background stars as faint as 4th magnitude can be imaged. Finally, at ranges of 20 km or less, center-finding OpNav images are shuttered with the wide 40◦ FOV NavCam.

These early PolyCam images are used with the star-based OpNav technique and the DSN’s radiometric tracking data to determine the spacecraft’s state relative to Bennu and refine the ephemeris of Bennu.

The NavCams will be used during the sampling operation:

At T-3 hours and 20 minutes, OSIRIS-REx slews to an orientation favorable for imaging with NavCam, one of three cameras part of the TAGCAMS suite. The approach images created by NavCam will help in the reconstruction of the TAG maneuver and support optical navigation using a Natural Feature Tracking algorithm that processes NavCam imagery to be available as a backup navigation data source and check the operation of the LIDARs.

The driving requirements for Touch And Go (TAG) navigation are to contact the surface within a 25 m radius of the desired sample collection site with velocity errors less than 2 cm/s. To meet these requirements it was proven early on in the mission design process that the Checkpoint (CP) and Matchpoint (MP) maneuvers would need to be adjusted to clean up the dispersions after orbit departure maneuver (ODM) due to navigation and burn uncertainties. The baseline navigation method was to use Lidar range measurements to determine the spacecraft orbit state prior to CP in order to use a guidance algorithm to update both the CP and MP Burns 5. The Lidar baseline had risk due to hardware development challenges and there was serious concerns that the Lidars may not be available in time. The project team decided a backup to the Lidar navigation was prudent to mitigate this risk. The decision was made to develop an autonomous optical navigation system called Natural Feature Tracking (NFT) as this backup using input from the existing Guidance, Navigation & Control (GN&C) TAGCAMS.

Multiple backup techniques were considered to estimate the spacecraft state prior to CP in order to implement the necessary onboard guidance for meeting the TAG accuracy requirements. Of the many options, it was clear that optical navigation was likely the most promising and mature technique to implement.

The NFT system estimates the orbital state by matching “features” found in imagery collected by the Navigation Camera (referred to as NavCam). This imagery is matched against the predicted appearance of the feature, which is rendered on-board ... 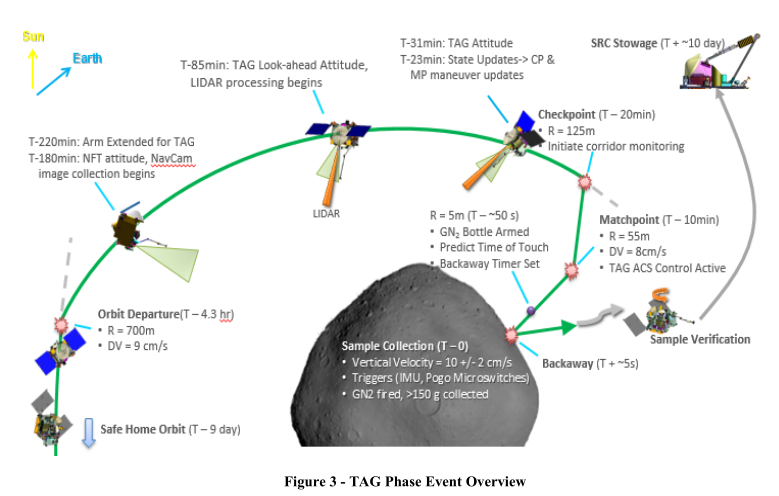 Due to the 30 light-minutes distance between Earth and Bennu, navigation has to be autonomous. So NFT is done on-board.

Not the answer you're looking for? Browse other questions tagged osiris-rex bennu or ask your own question.

4
How will OSIRIS-REx scan and characterise the near-earth asteroid Bennu?
2
Does Bennu pose a risk to Earth? And how can OSIRIS-REx's mission save us?
4
What is the line in this picture?
2
How low does OSIRIS REx's record-setting orbiting around Bennu go?
1
Is OSIRIS-REx's high gain antenna nearly the same as TESS'? If so, why?
2
Could ejecta from asteroid Bennu enter into temporary orbit around it? If so, how?
4
Will mining water on Bennu not be more economical than collecting it at the lunar south pole?
3
What would be the required equipment for an astronaut to dig to the centre of Bennu?
6
Could the uncertain mass of the OSIRIS-REx sample affect the trajectory of the return capsule?