What spacecraft components are in the foreground of this image of the Earth and Moon? What is the camera inside of?

Finally, some images from Queqiao, the relay satellite for the Chang'e-4 far side mission, showing the Earth and Moon! Queqiao is in a halo orbit at a Lagrange point 65,000-80,000 beyond the Moon to relay comms between Earth & CE-4 on the far side (H/T @LaunchStuff).

Question: What spacecraft components are in the foreground of this image of the Earth and Moon? What is the camera inside of?

I'm looking for an understanding of this configuration in some detail, so please don't just answer "these are parts of Queqiao". Thanks! 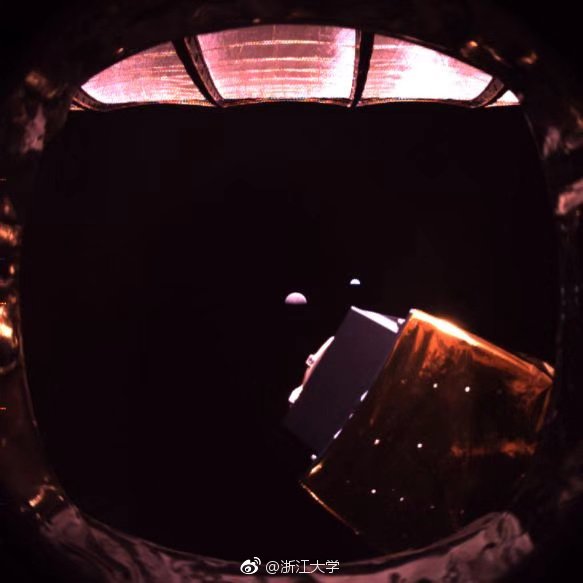 A much clearer view, is this from a different camera, or different distance? Where is all of the background clutter now? 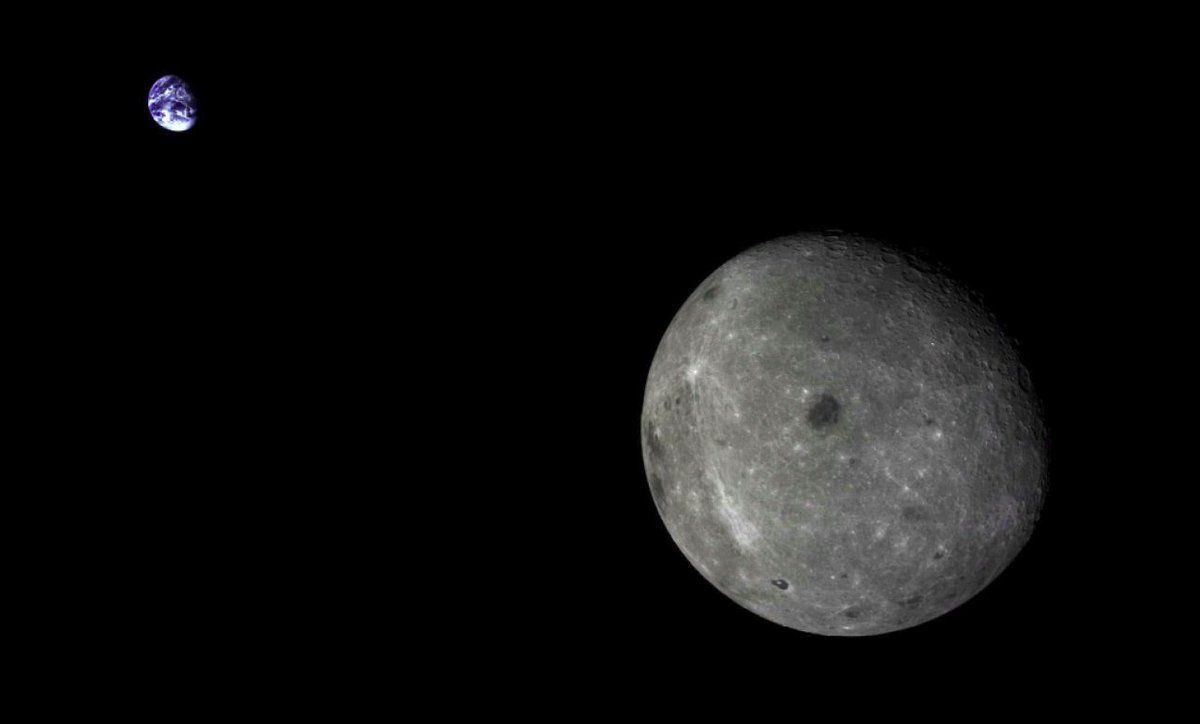 According to this Xinhua report (Chinese) following the launch, Queqiao, "carries two cameras, one large and one small. The small one will observe how the satellite antenna opens, and the large one can take group photos of the Moon and the Earth."

Annotated version of your first photo: 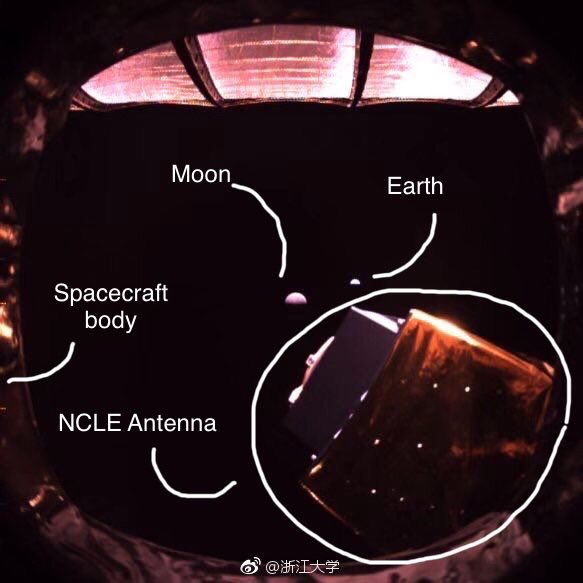 So this photo is from the engineering camera. The light-colored structure at the top is probably the antenna. That means the camera looks along the outside of the stowed antenna. This places the camera somewhere near the base of the antenna, but I can't figure out where exactly.

The box at bottom right is annotated NCLE, but it doesn't seem to match what I've been able to find about NCLE: the NCLE antennas are not on the same face as the parabolic antenna.

I've annotated this diagram to show the NCLE antennas. You can also see the curved shape of the spars that support the dish antenna. 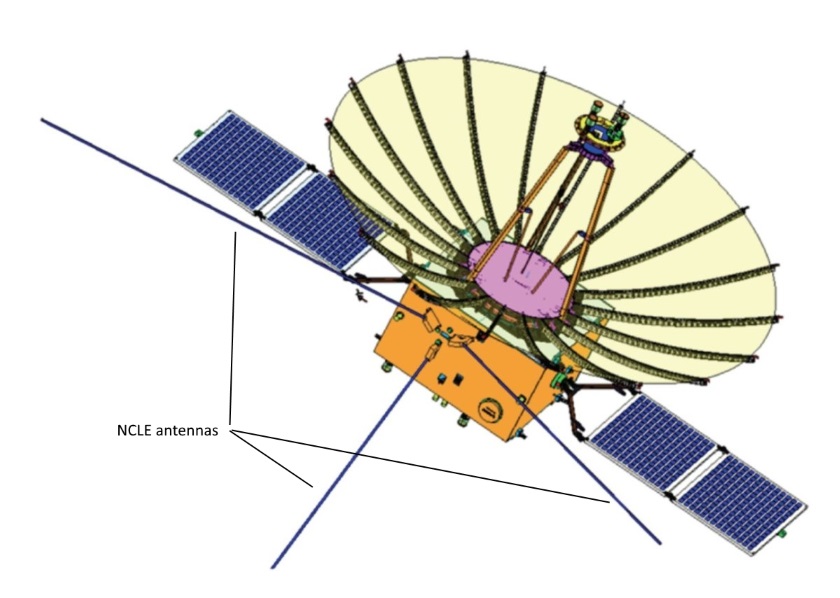 One of the two Longjiang ('dragon river') microsatellites that launched with Queqiao but set to operate together in lunar orbit, carries an optical microcamera (Arabic) developed by the King Abdulaziz City for Science and Technology (KACST) of Saudi Arabia.

The instrument weighs around 630 g and is capable providing images of the Moon with a resolution of 38 m per pixel at a perilune of 300 km away the lunar surface.

And there's a second camera, for use by amateur astronomers:

Longjiang-2 carries a camera developed by KACST of Saudi Arabia, accounting for the final of four internationally-provided payloads for Chang’e-4, which sent back these cool images of the Earth and Moon.

Another onboard imager developed by students at the Harbin Institute of Technology (HIT) in northeast China has allowed radio operators to download images. Here is one such image, of Mare Nubium on the near side of the Moon.

One photo made by Longjiang-2: 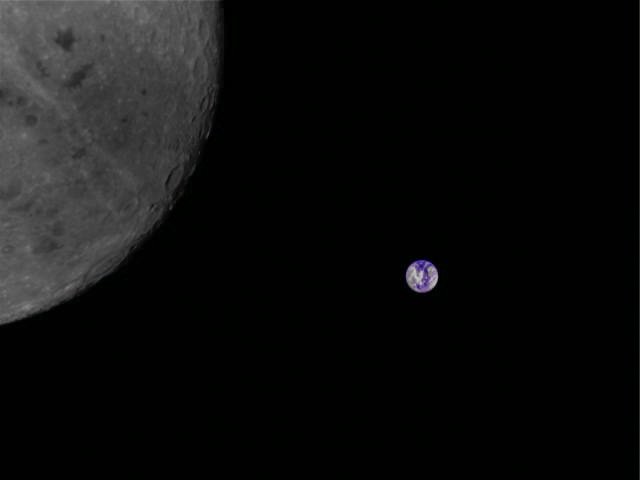 I don't think this one took the Moon&Earth photo from the question, it orbits too close to the Moon to get that shot.

Not the answer you're looking for? Browse other questions tagged photography identify-this-object china queqiao imaging or ask your own question.

7
Hijacked space data, notable instances of recovering images or other goodies from someone else's space mission?
2
What is the most recent photo taken from the Moon surface as of August 2019?

4
Now what do we think? Is this purple dot really caused by Cassegrain optics and coherent backscattering?
1
Did the Huygens lander have a flood-light for photography? Was it used?
5
Why is Queqiao's dish antenna so big? (Chang'e-4 relay satellite) Largest ever on/near the Moon?
3
What is happening in this photo of a glowing plume behind STS-70 and how was it taken?
8
Will Chang'e-4 really take a month to "get to the Moon"? With what trajectory?
6
Did Apollo-11 astronauts rehearse their photoshoots on Earth?
3
What kind of camera was used to produce this Apollo-era footage of the Earth?
4
Are Longjiang 1 and 2 the only spacecraft to image the far side of the Moon in a single frame with detail?
3
Was Queqiao in a halo or Lissajous orbit? Why do sources disagree?
2
Looking for photos of spacecraft/probes while not in orbit around a planet