What was the first piece of wood to reach the far side of the Moon? Or the first spacecraft?

Chang'e-4 is the first lander/rover mission to reach the far side, but probably doesn't have any wood on it.

Due to several requests (1, 2), I will answer my own question.

I have found the following...

There’s an interesting historical side note given China’s imminent, milestone making robotic landing on the farside of the Moon.

The U.S. Ranger spacecraft series was a set of kamikaze-like missions, hurled to the Moon to take photos of the lunar surface before a high-speed crash.

It would be very difficult to identify any specific impact crater associated with Ranger 4 says noted Moon expert, Philip Stooke. He is Professor Emeritus and Adjunct Research Professor within the Department of Geography, and Center for Planetary Science and Exploration, at the University of Western Ontario.

“The whole area has been imaged at high resolution by LRO so we probably have a picture of the crater,” Stooke told Inside Outer Space.

Stooke points out one thing to consider.

“What did people know about the farside at that time? Practically nothing! So, to calculate an impact location, you plot the trajectory, as well as you know it, and see where it intersects the lunar surface,” Stooke says. But if you know nothing at all about the topography, he continues, you have to use an approximation – it would have just been a sphere the mean size of the Moon. The actual point would vary a bit if there is a difference between the real topography and the assumed sphere.

“I don’t think anyone has ever gone back and recalculated the impact point for this or other missions like the NASA Lunar Orbiters using modern topography. If they did I think the orbiters could be found eventually, but I think the Ranger 4 location is probably still too uncertain to find it,” Stooke concludes.

Ranger 4 was a spacecraft of the Ranger program designed to transmit pictures of the lunar surface to Earth stations during a period of 10 minutes of flight prior to crashing upon the Moon, to rough-land a seismometer capsule on the Moon, to collect gamma-ray data in flight, to study radar reflectivity of the lunar surface, and to continue testing of the Ranger program for development of lunar and interplanetary spacecraft. An onboard computer failure caused failure of the deployment of the solar panels and navigation systems; as a result the spacecraft crashed on the far side of the Moon without returning any scientific data. It was the first spacecraft of the United States to reach another celestial body.

Ranger 4 was a Block II Ranger spacecraft virtually identical to Ranger 3. The basic vehicle was 331 kg (730 lb) 3.1 m (10 ft) high and consisted of a lunar capsule covered with a balsawood impact-limiter, 650 mm (26 in) in diameter, a mono-propellant mid-course motor, a 5080 lbf (22.6 kN) thrust retrorocket, and a gold- and chrome-plated hexagonal base 1.5 m in diameter.

[...]Even though lunar impact would occur as planned, the mission was for all intents and purposes a failure. Making it a more bitter pill to swallow was the nearly-flawless launch vehicle performance. The booster problems that affected Rangers 1-3 had been resolved, only for the probe itself to completely fail, as unlike the previous missions, Ranger 4 did not return any useful data. Finding the cause of the timer malfunction could also be difficult since it had occurred during the coasting phase prior to trans-lunar injection when Ranger 4 was passing between tracking stations in the Caribbean and South Africa.

NASA officials tried to put a positive spin on the mission, noting that it was the first time an American spacecraft had reached the surface of the Moon and that the probe was "far more sophisticated" than the Soviet Luna 2 space probe in 1959, which had been little more than a pressurized sphere designed to deposit pennants on the surface at impact. The excellent performance of the Atlas-Agena booster had also raised morale.

This spacecraft, similar in design to Ranger 3, was the first American spacecraft to reach another celestial body. Although the spacecraft did not achieve its primary objective, the Atlas-Agena-Ranger combination performed without fault for the first time. It acquired the dubious honor for being the first spacecraft to impact the far side of the Moon as well. 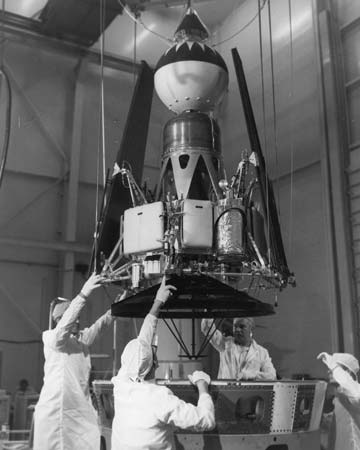 Not the answer you're looking for? Browse other questions tagged the-moon identify-this-object chang-e or ask your own question.

24
Puzzler - which spacecraft(s) incorporated real wood structural elements?
34
Why is there a large wooden ball on Mariner 3's magnetometer?
21
Is there any way to land a rover on the Moon without using any thrusters?
17
Could a spacecraft be made out of wood?
4
First LED left on another planet⁺ by humans?
5
White papers on alleged 1960s Chinese wooden ablative reentry heat shield
3
Why don't the hottest temperatures of a re-entering spacecraft occur near the “bottom”?

11
When Chang'e-3 landed on the moon, did LADEE notice?
4
Why is the crust on the near side of the Moon thinner than on the far side?
8
Which side of the Moon faces Earth, the heavy side or the lighter side?
4
Could a radio telescope orbit Earth-Moon L2 so that it is in the Moon's radio shadow?
8
Will Chang'e-4 really take a month to “get to the Moon”? With what trajectory?
0
What spacecraft components are in the foreground of this image of the Earth and Moon? What is the camera inside of?
38
Why did the Chinese send flies and plants to the far side of the moon?
94
Who was the first human to sleep - perchance to dream - on the Moon?
6
Chang'e 4 lunar rover movement