Why does the Apollo-8 Trans-Lunar Injection burn appear to be pulsing in this photo?

This tweet called my attention to The Smithsonian National Air and Space Museum story Photographing Apollo 8's Orbit Toward the Moon. The story is quite an interesting bit of space history and worth a read. It includes a sequence of telescopic images of Apollo-8 from the Smithsonian archive. The first two show a periodic modulation in both brightness and in plume size.

What causes the oscillations/modulations shown in these two images? 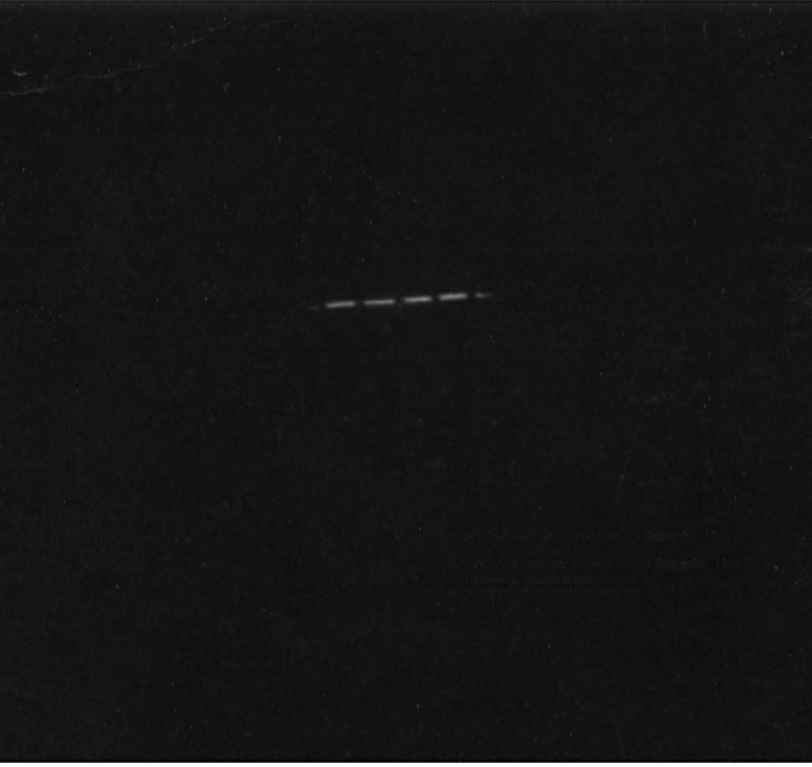 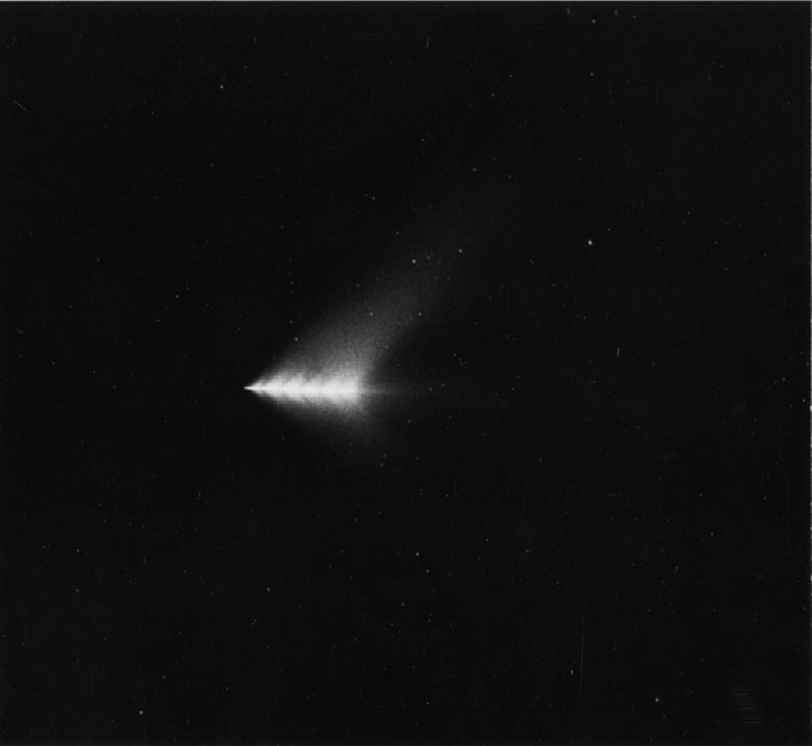 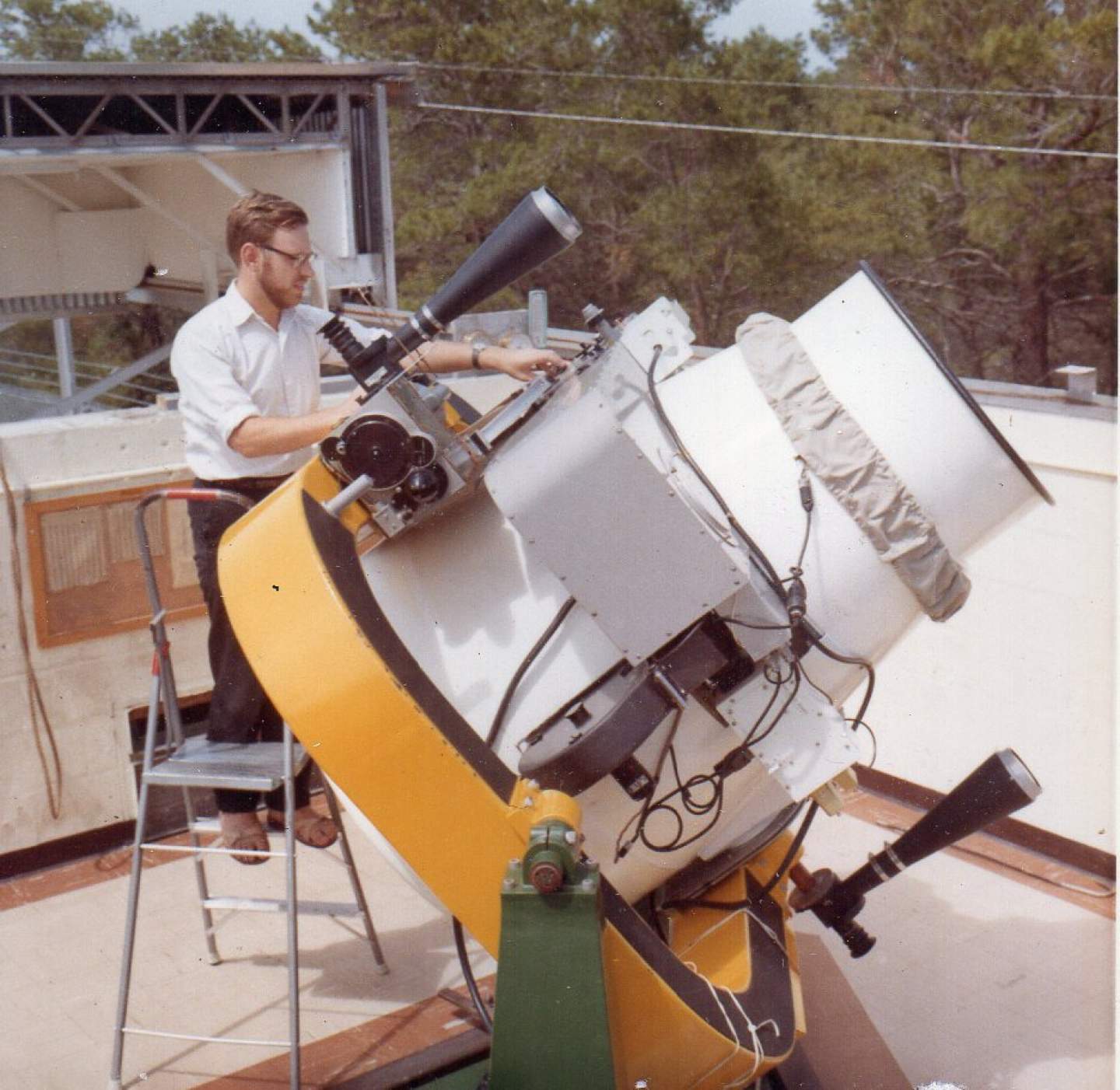 For a satellite photo run with the Baker Nunn camera the following operations occur: The Satellite Tracking Cameras consists of a continuous 35-mm length of film coming from a supply canister. The film is stopped for an exposure at the center of the film bridge and is then stretched over the optical shaped surface on a backup plate. The stretching of the film will place the emulsion surface of the film in focus over the total width and length of the films exposure. The film is then transported out to a take-up canister stopping with its trailing length ready for the next exposure.

Continuously, a pair of rotating shutter blades is passing around the film bridge, which will create clear stripes in the exposed image trail of the traveling satellite photo.

Continuously, another complete shutter is opening and closing, blocking unwanted exposure during the film transport.

Simultaneously an International time signal clock from the Norman Clock Co, Green Bay, Wisconsin is located at each Baker Nunn Satellite Tracking station. A time signal will be projected on the end of each exposure of the film.

A dozen f/0.75 Baker-Nunn cameras with 20-inch apertures – each weighing 3.5 tons including a multiple axis mount allowing it to follow satellites in the sky – were used by the Smithsonian Astrophysical Observatory to track artificial satellites from the late 1950s to mid-1970s.

Not the answer you're looking for? Browse other questions tagged apollo-program orbital-maneuver identify-this-object apollo-8 trans-lunar-injection or ask your own question.

1
At what time in the Apollo 14 mission did the maneuver shown in this image happen, and what exactly was happening?

2
Why does the side of the LEM look almost black in this photo? Did that cause problems?
3
Who is the unnamed astronaut in this uncredited photo used in commercial promotional material?
12
What does this SpaceX tweeted photo show and what causes the pure red and blue color?
4
What's this mini-cupola-looking object in this photo from the ISS?
25
In this iconic lunar orbit rendezvous photo of John Houbolt, why do arrows #5 and #6 point the "wrong" way?
18
What gave NASA the confidence for a translunar injection in Apollo 8?
3
What kind of camera was used to produce this Apollo-era footage of the Earth?
1
Does this Soyuz vehicle burn coal or oil? What is its official name?
5
Why does this photo of the Hubble Space Telescope look so weird?
10
What antenna is this in an Apollo 15 LM photo?