Why would the orbit of a satellite in GEO climb by 21 km in altitude over six months by itself?

This answer mentions several effects that tend to move geostationary satellites out of their "box" over time, but one really surprised me.

According to the plot below (from there, but uncredited) the semi-major axis of a satellite in GEO will climb by 21 kilometers in six months.

Is this really true? If so, could someone explain how this rapid orbit-raising is possible? I don't think there are tidal forces at work here, the spacecraft would not be massive enough to cause shape changes in the Earth big enough to do this.

If it is possible please include a sourced mathematical expression that reproduces approximately this rate of orbit-raising as well. 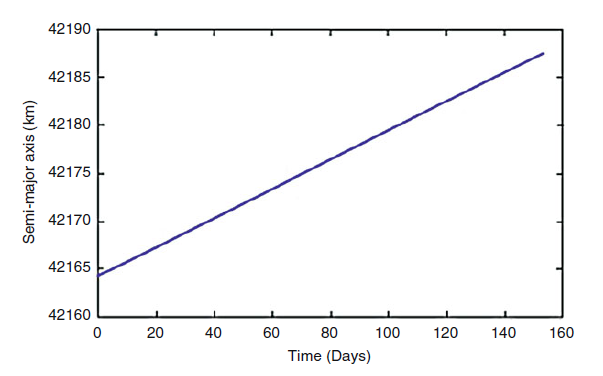 I don't have a mathematical derivation for you but I propagated two different orbits to demonstrate this effect for you. I used a gravity field of degree and order 15, and turned off all other perturbations (SRP, 3rd body perturbations, tides,...).

The two orbits differ only in their position over the Earth, which is shifted by 90 degrees along the orbit.

Not the answer you're looking for? Browse other questions tagged orbital-mechanics physics geostationary geosynchronous or ask your own question.

12
What is the maximum mass of a satellite that can be placed in GEO?
10
At which point would two GSO/GEO satellites with similar orbital elements be closest to each other?
30
Why is geosynchronous orbit an altitude, rather than a velocity?
4
Why would a space elevator / structure need to be in Geosynchronous orbit?
1
Is GEO redundant (Geo- and Earth)? Would we call a Lunasychronous Lunar orbit LLO?
8
How do stable equilibrium points work in GEO? If all geosynchronous spacecraft suddenly lost stationkeeping, would most "fall into" one or the other?
2
Why would a mission choose a geosynchronous orbit over a geostationary orbit?
8
What altitude would an aphrodiosynchronous satellite need?