Has any spacecraft ever been flown manually to orbit?

Has anyone ever manually flown a spacecraft to orbit, Kerbal Space Program-style?

I have never heard of such a thing, at least on the US side. I'm pretty sure it would be legendary had it ever happened. The Apollo astronauts had that option on the Saturn V. Gene Cernan once said:

You almost wish you hadda guidance failure at liftoff. Because I knew I could've flown that big Saturn V into orbit goddamn near as good as the computer.

I believe manually flying a rocket to Earth orbit from Earth's surface would be impractical for the following reasons:

Manual orbital rendezvous has been tried, and the first attempt failed due too poor understanding of orbital mechanics https://en.wikipedia.org/wiki/Space_rendezvous

More spectacular manual piloting occurred during the Apollo 13 lunar mission includin changing the orbit. https://en.wikipedia.org/wiki/Apollo_13 . When the service module failed, the astronauts were forced to abandon their descent to the moon's surface and instead use the lunar module as a lifeboat. They executed several burns of the lunar module's engine in order to return to Earth, according to instructions from Mission control and using the earth and celestial bodies out of the window for reference. https://ntrs.nasa.gov/search.jsp?R=20090026451 gives a good overview of what was required. Things to note are:

Shuttle had the capability to fly manual ascents, and the crew was trained to do it. It never happened in the real world.

This excerpt from the Ascent Checklist shows one of the places where the crew could be directed to take over manual control (CSS = Control Stick Steering) and manual throttle control. 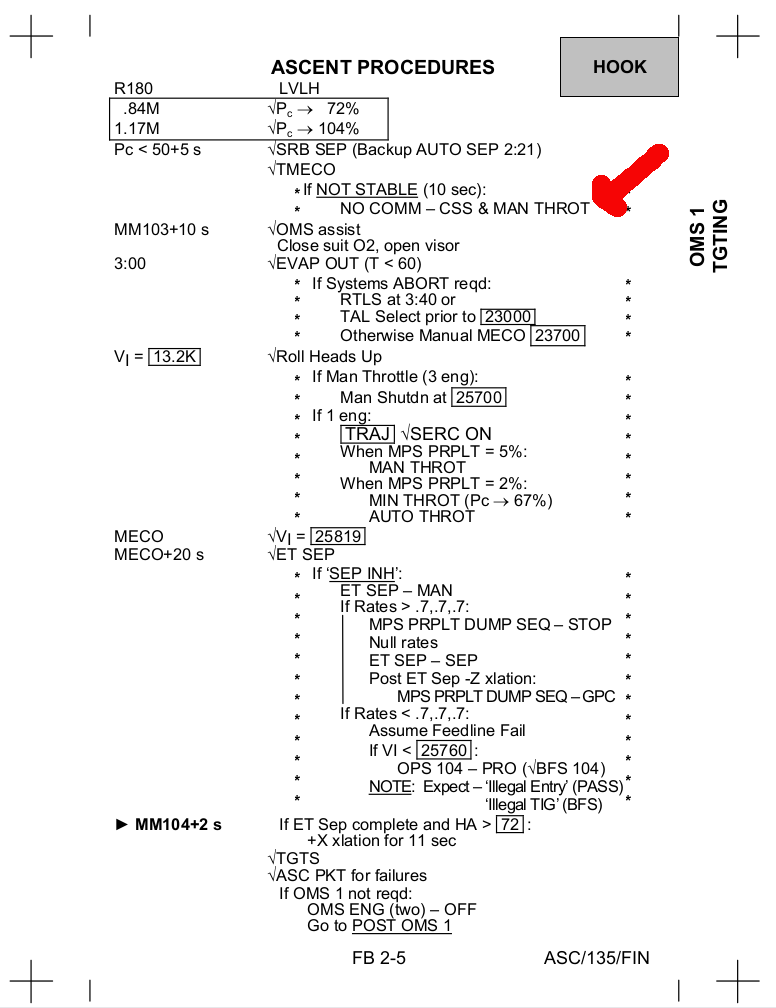 This is not a definitive answer, but let's look at the very first human space flights, Vostok 1 with Yuri Gagarin in the USSR and Mercury-Redstone 3 with Alan Shepard in the USA.

The Vostok was controlled completely automatic or from ground, since it was feared that Gagarin might pass out or would be otherwise unable to control the spacecraft correctly. The controls were even locked but Gagarin had a code he could have used to unlock them.

Mercury-Redstone 3 had an automatic ascend but Shepard took manual control during the flight to do some experiments. NASA scientists/engineers didn't even want to include manual controls for Mercury but the pilots insisted they be added (and a window) so they can do something if the automation fails (which turned out to be a good idea).

So even for the very first space flights, in a time when the spacecrafts didn't even have a programmable computer, the launch phase was automated.

Depending on your definition of orbit, the X-15 Aircraft was flown above the Kármán line to 108km in flight 91. At its Apogee, it had no aerodynamic control and was in a rather elliptical orbit. If you insist on once-around, the other answers are most likely the authoritative ones.

In the X-15 flight 51 Armstrong used the MH-96 was an experimental adaptive controller to fly by hand to 207,500 feet (63km) and bounced off the top of the atmosphere when trying to re-enter.

There is both an automatic and manual flight control for the X-15. I didn't find an absolute reference as to whether flight 91 was piloted in manual mode or not. However, some non-atmospheric X-15 flights clearly were in manual mode.

9
How do vehicles get smoothly to a circular low Earth orbit?
14
Do any spacecraft use carkeys?
8
Does terminal velocity play a significant role when launching from Earth?
13
Viability of orbital refueling
2
Has any system been placed in orbit using horizontal-launch?
4
Has anyone considered using multiple rockets to lift a single payload?
6
Optimal thrust vs isp for variable isp rockets (VASIMR) when taking off/orbiting
16
What are “Ohms burns” in the context of Scott Kelly, KSP, and the Space Shuttle?
7
Has any rocket been launched into orbit from a plain flat surface?
5
Has a rocket from a torpedo tube ever reached space?