Which spacecraft can see plants "glow" during photosynthesis during the day, and what wavelength does it use?

This comment reminded me that I once read something about an Earth observation satellite that has a sophisticated optical system (possibly a camera) that it tuned to a very narrow range of wavelengths where the Sun's spectrum is particularly dark and the chemical process of photosynthesis happens to occasionally emit photons.

Yes, plants glow when they are photosynthesizing, a little bit.

But I can't remember any details about this though.

I even can't remember if it's a wavelength where the Sun is dark, or where there is significant (but not complete) absorption in the Earth's atmosphere.

Question: Which spacecraft can see plants "glow" during photosynthesis during the day, and what wavelength does it use?

Related question in Biology SE: What does the spectrum of Chlorophyll fluorescence look like?

The satellite you're thinking of is NASA and Orbital Science's Orbiting Carbon Observatory-2 or OCO-2. It uses wavelengths between 0.7 and 2.1 microns. Hope this helps :)

Here's a NASA video for OCO-3

Based on @CaseyBeck's hint, I've done some further reading. 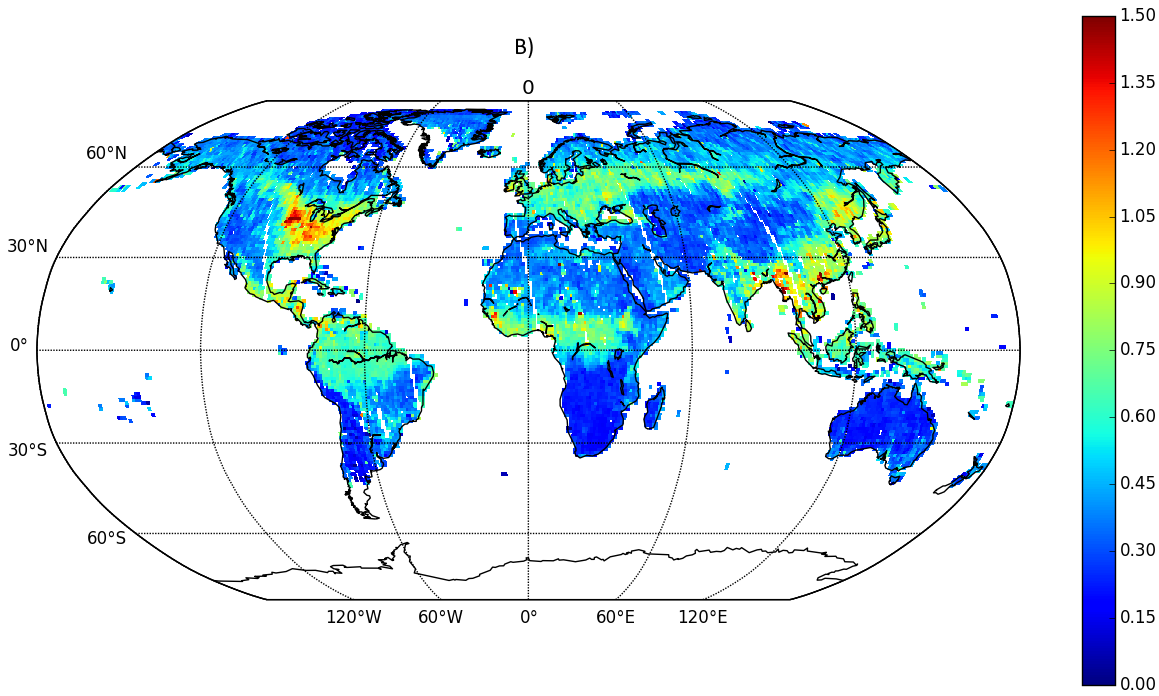 Examples of fluorescence data can be accessed here: https://disc.gsfc.nasa.gov/datasets/OCO2_L2_Lite_SIF_V8r/summary?keywords=OCO-2%20fluorescence

Measurements of solar-induced chlorophyll fluorescence (SIF) from satellites offer insight into terrestrial gross primary productivity (GPP), the gross uptake of CO2 through photosynthesis (38). The SIF signal, a small amount of light emitted during photosynthesis, is detected in remote sensing measurements of radiance within solar Fraunhofer lines. Retrieval methods were developed in recent years with the Japanese Greenhouse Gases Observing Satellite (GOSAT) Thermal and Near-Infrared Sensor for Carbon Observation–Fourier Transform Spectrometer (TANSO-FTS), Global Ozone Monitoring Experiment-2 (GOME-2) onboard MetOp-A, and OCO-2 measurements, and its potential for quantifying GPP is being assessed (38–42). Although the SIF signal is quite small—enhancements are typically less than 2% of the reflected sunlight (43)—the high signal-to-noise spectra from OCO-2 enable precise SIF measurements at high spatial resolution (37). Typically, the random component of the retrieval error varies between 0.3 and 0.5 Wm−2 μm−1 sr−1 (15 to 25% of typical peak values of SIF) in the 757-nm fitting window (44), but the errors are substantially reduced by a factor of Embedded Image if single retrievals (from individual soundings) are binned to gridded maps (n is the number of soundings per grid cell) at certain temporal averaging domains. In a companion paper in this issue, Sun et al. (37) describe OCO-2 SIF characteristics in detail and illustrate mechanistic connections between SIF and GPP. They show that when OCO-2 data are compared with GPP from flux tower measurements, well matched in spatial scale, they have correlation coefficients ranging from 0.89 to 0.99, with similar slopes for three different biomes. Earlier studies that used sparse data sets that had to be interpolated over time indicated biome-specific linear relationships. 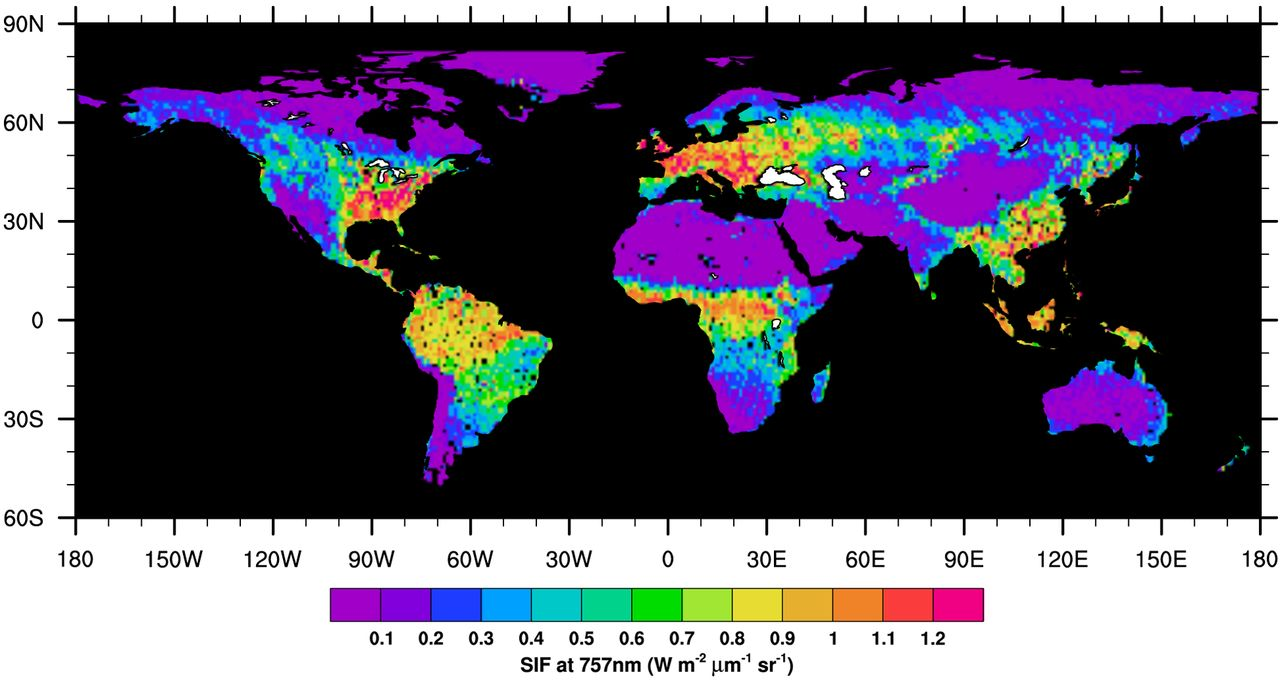 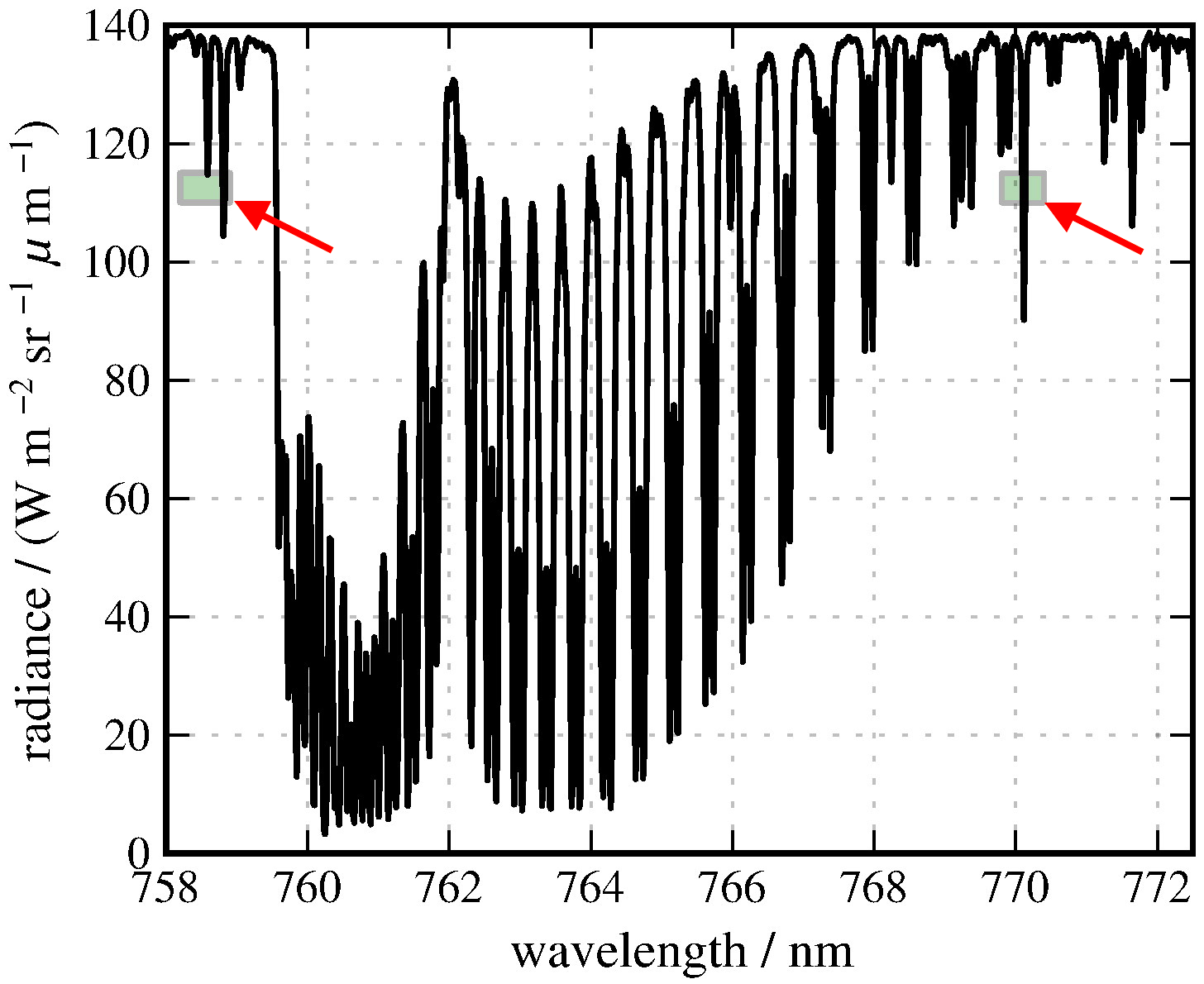 Fig. 1. Exemplary OCO-2 spectrum to be used for chlorophyll fluorescence retrievals. Data were taken during a thermal vacuum test at JPL on April 20, 2012 looking into the sun using a diffuser plate. The primary SIF retrieval fit windows are indicated by transparent green rectangles.

The windows focus careful analysis in the narrow spectral slice near those relatively isolated absorption lines.

Fig. 5 shows the leading singular vectors as determined from the OCO-2 Thermal VACuum (TVAC) dataset under a large range of viewing angles. The first singular vector typically represents the main spectral shape and a simple multiplicative factor of this singular vector explains most of the signal variance. In the ideal case, the following singular vectors represent derivatives of the observed radiance with respect to changes in key physical quantities such as Doppler shift, oxygen column amount or viewing geometry. As apparent in Fig. 5, the short wavelength window, which only encompasses the Fraunhofer lines (devoid of oxygen absorption lines) exhibits singular vectors (SV2 and SV3) mostly representing a spectral shift due to the Doppler shifts. Spectral shifts have a non-linear impact on the observed radiance and the singular vectors most likely represent a linear approximation of this effect using two terms. The 770 nm window includes two stronger oxygen features at 769.8 and 769.9 nm and the varying optical depths during TVAC (due to varying solar zenith angles) are represented in the second singular vector while the third covers most of the spectral shift effect. The advantage of the SVD approach is that these derivatives are directly computed from the measurements themselves without the need for computationally expensive forward model simulations of the true physics of the process. The non-linear effect of the spectral shift is linearized with the SVD, enabling a simple linear least squares approach for the retrieval. In addition, subtle uncharacterized instrumental features are taken into account at the same time. 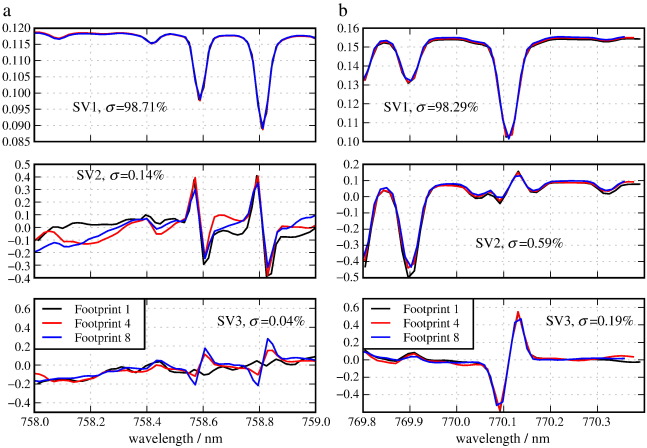 Fig. 5. First three leading singular vectors (SV) of the OCO-2 TVAC test dataset for the two chlorophyll fluorescence retrievals windows covering the Fraunhofer lines at 758.6 and 758.8 nm (left panel) and 770.1 nm (right panel). The explained variance of each singular value is provided within the respective panels. Only 3 out of the 8 OCO-2 footprints are shown for clarity.

Not the answer you're looking for? Browse other questions tagged earth-observation or ask your own question.

34
What would it take to get a message to another star?
1
Could outer system probes detect lasers shone at them from earth (orbit)?

20
What is the name of the area on Earth which can be observed from a satellite?