Why rockets are not tossed up before launch [duplicate]

Ask Question
Asked 1 year ago
Active 1 year ago
Viewed 214 times
2
$\begingroup$
This question already has answers here:
What benefits can be gained from launching below ground? (6 answers)
Closed last year.

Ok, I understand the nature of my question but anyway why the rockets are not tossed up before launch. It could introduce a huge handicap for a rocket in terms of reduced distance it has to travel, momentum it has to reach, etc, etc, etc and eventually increase the maximum weight the rocket can carry with little to no changes in rocket technology itself.

There are mines in the world that go as deep as 5km. So digging a 5km deep hole and building a tossing platform that would accelerate a 100+ ton weight of the rocket is of course a challenge but this seems not a rocket science compared to making an unstable rocket actually fly.

If I didn't let any mistakes assuming no air friction exists such jump at it's time t [seconds], with platform constantly accelerating at g [m/s^2] starting acceleration at y0 [meters] and finishing acceleration at y1 [meters] with initial speed of dy0 [m/s] could be described by equation:

So for -5km hole and constant acceleration of 5g it would take 14.28 seconds of acceleration, 700 km/h (435 mph) of speed and would push the rocket 31 km high in the sky until it starts falling. 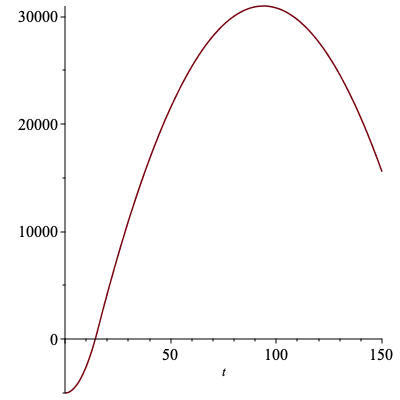 The main reason is, it's a lot of effort and complexity for very little gain.

The minimum velocity required to keep a spacecraft in low earth orbit is about 8km/s (28800km/h). Your 700km/h is less than 2.5% of that. It is easier just to add a bit more propellant to the launcher. In practice delta-V nearer 10km/s is needed to get to orbit due to air resistance, and to fight gravity at the lower speeds. Rockets actually have to throttle down shortly after liftoff due to the effect of air resistance (the stage of launch known as max q.)

Building a 5km vertical railgun is a major project, and adds another thing that can go wrong at launch. Additionally, the frequency of launches is quite low and doesn't warrant the cost of such hardware. According to http://spaceflight101.com/2017-space-launch-statistics/ there were 18 Falcon 9 launches and 15 Soyuz launches in 2017 (there were also 16 Long March launches, but this is a far more diverse family.) So typically a single rocket model only very rarely has more than two launches a month. This is compounded by the fact that the most frequently used rocket models are launched from more than one site, so 10 launches a year for a given model and site is a high number.

An alternative to the railgun approach is launch from under the wing of an aircraft. This achieves close to 700km/h while lifting the rocket through the thickest part of the atmosphere. It also has the advantage that the aircraft can be flown to any desired launch site. Several systems are being developed, one operational https://en.wikipedia.org/wiki/Air_launch_to_orbit

That said, Rocket sleds are quite similar to what you propose. They have been tried (but never put into operation.) https://en.wikipedia.org/wiki/Rocket_sled_launch and https://en.wikipedia.org/wiki/Rocket_sled indicate that ground speeds of over 10000km/h have been achieved at research scale, and about half this speed for 60000kg masses. Rather than dig down, the sled track can be built up a mountain, to get the rocket into thinner air.

I would caution that there is a misleading statement in one of these rocket sled articles that the space shuttle used 1/3 of its propellant to reach 1000mph - the solid rocket boosters were by design far less mass efficient (had a lower specific impulse) than the liquid propellant system, and were jettisoned early in flight, so this figure is heavily skewed by the mixture of propellant systems on the shuttle.

Not the answer you're looking for? Browse other questions tagged rockets design-alternative or ask your own question.

9
What benefits can be gained from launching below ground?
2
Break Away Valves for Launch

31
Why are hydrogen-fluorine fuels not used for rockets more frequently?
19
Why are the very reliable rockets Atlas V and Ariane V not rated for human flight?
18
Why are rockets cylindrical?
13
Why are rocket mass on the launch pad and payload mass to LEO not strongly correlated?
6
Do rockets have a “best before date” after assembly?
19
Why not build rockets out of composite materials?
4
Why are some rockets orange?
4
Why does the SpaceX strongback outgas 60 seconds before launch?
15
Why not keep the engine for multi-stage rockets?