Reading this question (Is the cupola, on the inside of the ISS, cold or warm to the touch?) prompted me to wonder about an object in orbit's orientation as it orbits its host object. For example, consider a hollow tube that is in orbit around the earth and it is perfectly perpendicular to the earth. Spaceman Spiff is immediately beneath the cylinder, and is able to look through the cylinder and observe a specific star.

As he and the tube orbit around the earth (assuming no external influences other than the earth's gravity), would the tube remain pointed at the star (hence the tube changing from perpendicular orientation in relation to the earth to parallel as it gets to 1/4 around its orbit) and Spiff would continue to see the same star in his view? Or, would the cylinder remain perpendicular to the earth, and Spiff would see a continually changing field of stars during his orbit, until he gets back to his starting position, when the star would come back into view as he completes his orbit?

Most spacecraft, I believe, are designed and controlled very carefaully to maintain a specific orientation with the earth, but I don't know what would happen if there was no spacecraft control mechanism or external forces acting on it.

tl;dr: Alas, Spaceman Spiff will not have a very good viewing experience. This turns out to be a really interesting problem by the way! The only directions you can point the orbital telescope and hope to have it continue to point in the same direction at a star without an attitude control system are the perpendiculars to the orbital plane. For an Earth equatorial orbit for example, that would be Celestial North, near polaris, or Celestial South.

The Earth's gravitational potential falls off as 1/r, the force as 1/r^2. For any orbiter of non-zero size, some parts of it will be closer to the Earth and be pulled by the Earth more than other parts. This gravity gradient has been both a problem and a solution.

First let's think about the orientation with respect to the Earth's center, the nadir or local vertical direction. For a long thin object like a tube or telescope, there are two ways that it can be oriented so that it remains in an equilibrium position in this rotating frame.

The only directions you can point the orbital telescope and hope to have it continue to point in the same direction at a star without an attitude control system are the perpendiculars to the orbital plane. For an Earth equatorial orbit for example, that would be Celestial North, near polaris, or Celestial South

For some math, see this question and especially @Litho's answer. For a thin rod of mass $m$ and length $l$ in circular orbit, with a perpendicular moment of inertia $\frac{1}{12}ml^2$, rotating in-plane around the short axis, the torque (to first order) is given by

and the instantaneous angular acceleration is simply

When out of equilibrium, a rod will oscillate for a very, very long time, unless your object has build-in dampers to slowly absorb the angular acceleration as it spins at first, or eventually achieves "capture" in a gravity gradient stabilization, where it will oscillate and slowly decay. The details depend on initial conditions.

Natural damping mechanisms include differential atmospheric and photon drag, and induced tidal distortions in the Earth by the telescope's gravity. These are very very small on an orbital timescale!

This is all from Gravity Gradient Stabilization of Earth Satellites by R. E. Fischell: 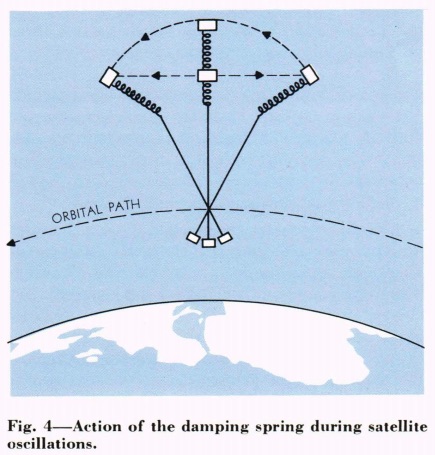 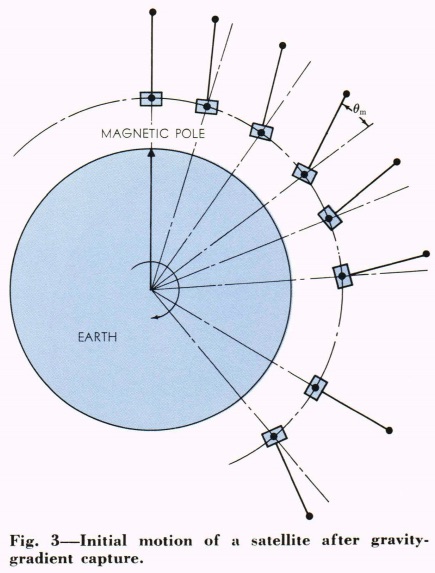 $\theta$ and $\dot{\theta}$ in inertial frame for a thin rod in a 400 km circular orbit starting at various initial angles with respect to the nadir, with no initial rotation in the inertial frame (i.e. looking at some star): 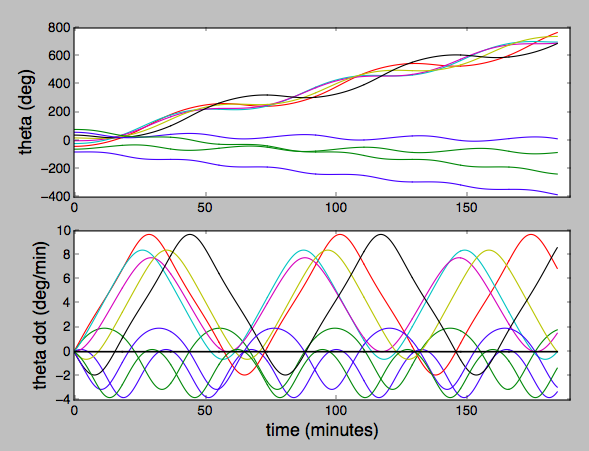 23
Why doesn't the ISS orient itself to the Earth's magnetic field like a compass needle?
13
Why aren't space telescopes put in GEO?
23
Is the cupola, on the inside of the ISS, cold or warm to the touch?
17
Is the difference in orbital velocity of different parts measurable on board the ISS?
6
Are all or some geostationary satellites tidally locked to the Earth?
8
What are damper booms, and how do they facilitate triaxial stabilization?
7
Do satellites in orbit undergo translational motion or rotational motion, when initially they are not given any additional spin?
3
What is a gravity gradient?
6
How does gravity-gradient stabilization work?
4
Could two satellites in the same orbit, but phased differently, be tethered in a sustainable manner?
See more linked questions

19
How deep is the force well of L4 and L5 Lagrangian Points of Earth-Sun set?
8
What shape was Apollo 13's orbit in a non-rotating reference frame?
2
Orbit, circularizing, apogee/perigee
6
Is the Gateway's halo orbit bound to Earth? Would the Gateway remain in Earth orbit if the Moon disappeared?
4
Question about orbital mechanics and trajectories for a space infrastructure project/climate adaption idea
2
Orbital mechanics from Daniel Suarez's book "Delta-V"
6
Can an orbit rotate around a non-orthogonal axis?
3
Can mascons have Lagrange-like points? In principle? At the Moon?