I have a conceptual idea for a photonic laser thruster for a spacecraft and I am wondering if this particular idea has already been thought of and whether or not it is capable of generating enough thrust to propel a spacecraft.

In a nutshell, protons (or other positively charged particles) flowing in the Sun's solar wind would enter into a round opening in the thruster's hull, these protons would then be decelerated by an electric field within the thruster resulting in an lower energy level, which means they will lose kinetic energy and start emitting photons, thus satisfying the law of conservation of energy. These photons will then hit a mirror and be reflected back and out of the opening in the thruster's hull. In theory, these photons will transfer their momentum to the thruster/spacecraft by reflection and propel the spacecraft forward.

Also, theoretically the protons could be brought to a complete stop by this electric field and then their direction will be reversed by the same electric field and be accelerated to a high velocity until they exit the opening in the thruster's hull. 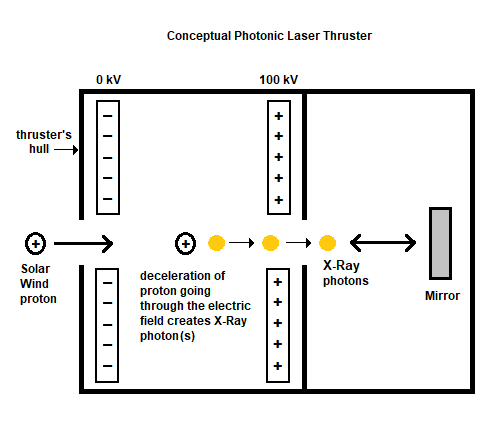 Indeed such a thruster is possible, but it is wildly impractical.

I've talked with a group in Finland (with some interest from a couple of my ESA friends) that is trying to design a system that would use the momentum of the solar wind directly. The idea is to deploy a huge net (hundreds of square km) of exquisitely thin, electrically conducting wires that are charged to a high potential. In theory the electric field established by the net reflects the oncoming ions (again, mostly protons) back at the sun, yielding the momentum exchange to produce a radially outward force. Unfortunately my friends who are magnetospheric physicists told me, "Those guys don't understand the behavior of magnetoplasmas," and they claim the net wouldn't work as proposed.

3
Could the Hubble mirror be used to create a laser to propel solar sails?
5
Got Milk? Why is the term “colloid” used in “Colloid or Electrospray thruster”?
0
Could a spacecraft be propelled by the deflection of a very high number of charged particles?
1
Could a spacecraft be propelled by a 180 degree deflection of two charged particle beams?
0
Will a spacecraft accelerate in a gravitational field via the use of a powered rotating mass?
1
Could a CubeSat be propelled by this low-tech electromagnetic propulsion system?
2
Could a carbon arc lamp help to propel a spacecraft through interstellar space?
3
Could the kinetic energy in the Sun's solar wind power an ion propulsion system for an interplanetary spacecraft?
2
Potential Fusion Drive system calculation issue