I have not found much about active liquid cooling for heat shields using cryogenic fuel. It has been mentioned but not researched in depth. It may never have been done. Now that the Starship seems to be going that way, I'm curious.

Has anyone studied active liquid cooling of heat shields?

There have been many such. Here's one from way back in 1957 for the Brass Bell vehicle.

The primary or load-bearing structure was of aluminum and relied on cooling in a closed-loop arrangement that used water-glycol as the coolant. Wing leading edges had their own closed-loop cooling system that relied on a mix of sodium and potassium metals. Liquid hydrogen, pumped initially to 1,000 pounds per square inch, flowed first through a heat exchanger and cooled the heated water-glycol, then proceeded to a second heat exchanger to cool the hot sodium-potassium. In an alternate design concept, this gas cooled the wing leading edges directly, with no intermediate liquid-metal coolant loop. The warmed hydrogen ran a turbine within an onboard auxiliary power unit and then was exhausted overboard. The leading edges reached a maximum temperature of 1,400ºF, for which Inconel X was a suitable material. 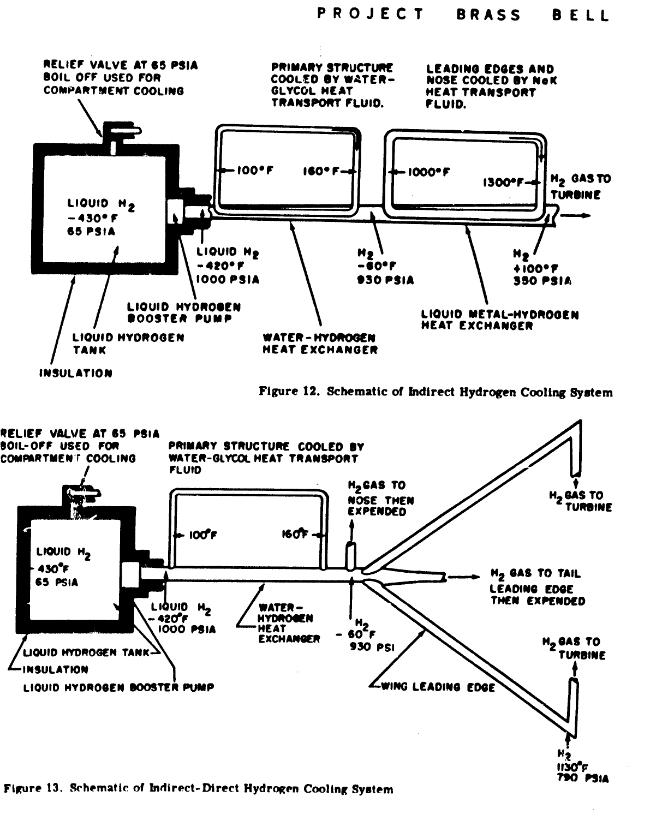 In the most recent (as of Oct. 2019) SpaceX Starship media event, (SpaceX 29-sep-2019 YouTube video Starship Update) Elon Musk stated after about 21:05 that they were ditching the "transpirational cooling method" which was supposed to pump cryogenic fuel out of "pores" to form a cushion, often described as similar to the " "Leidenfrost effect" . Instead, they will be using hexagonal heatshield tiles constructed out of PICA-X, a similar material to what SpaceX uses for the Dragon 1 and Crew Dragon capsules.

I'm pretty sure that since they are no longer planning on using the "pores" system, they won't be circulating cryogenic liquids through the heatshield.

Not the answer you're looking for? Browse other questions tagged spacex-starship heat-shield liquid-cooled or ask your own question.

2
What might the description "tiny glass vermicelli at a microstructure level" refer to? (SpaceX Starship heat shield tiles)

4
Are there any techniques of heat shielding an irregularly shaped object?
16
Why will the BFS reenter broadside rather than engine first?
5
Maximum speed based on atmospheric altitude given maximum temp?
5
Heat shield on Venus
14
How does SpaceX plan to deal with possible methane buildup around Starship?
12
Which star could Starship reach soonest?
4
Post-flight analysis of SpaceX Starship 20 heat shield tiles