Distribution of satellites by inclination

It should be trivial to produce such statistics from published TLE files, but I couldn't find any for artificial Earth-orbiting satellites.

Question inspired by some of the discussion around: Are there any known reasons why there are no spaceports in the European Union?

UCS publishes a database (text and excel) of "active satellites" which have publicly available data. It directly lists inclination for each, so analyzing them from that source would be pretty easy.

Pixalytics published a summary using that database that showed inclination for just the 63% of satellites that are in LEO orbits. From that summary:

Not sure exactly why 1 LEO sat has an orbit described as cislunar....

Just threw it in google sheets and generated this chart. This is using the entire 1950+ "active satellites", so includes all the GEO sats. 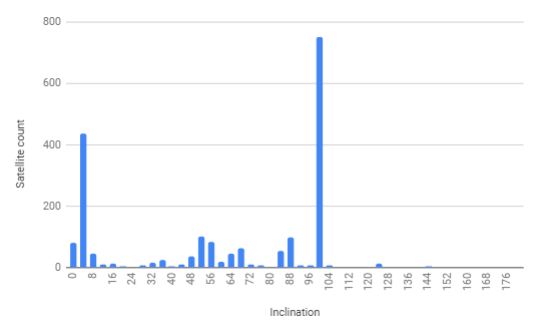 Not the answer you're looking for? Browse other questions tagged artificial-satellite orbit inclination or ask your own question.

17
Are there any known reasons why there are no spaceports in the European Union?

13
Does cosmic dust pose a problem for long-term satellites, telescopes and probes?
6
Swarm: Is ESA launching another set of aerodynamically streamlined satellites into LEO without any self-destruct system onboard?
21
What is the oldest orbital satellite we can contact?
26
Can a satellite orbit Earth so that it always has the Moon in line of sight?
10
Will SMAP produce predictable satellite flares visible to the naked eye from the surface of the Earth?
4
What is the final conclusion about 'object M'? What happened?
3
How are "terminator-riding" sun-synchronous satellites never passing over the pole?
13
What orbital inclinations will be launched into from Scotland?
7
Are sun-synchronous orbits always North to South?
5
Inclination maneuvers for GEO satellites