In a recent question, an answer showed a diagram of a Soviet S5.2/9D21 rocket engine. According to the diagram, there are four pyrocharges (3, 7, 24, and 27) in the engine. What is the purpose/function of these pyrocharges? Are these part of the Flight Termination System or something else? 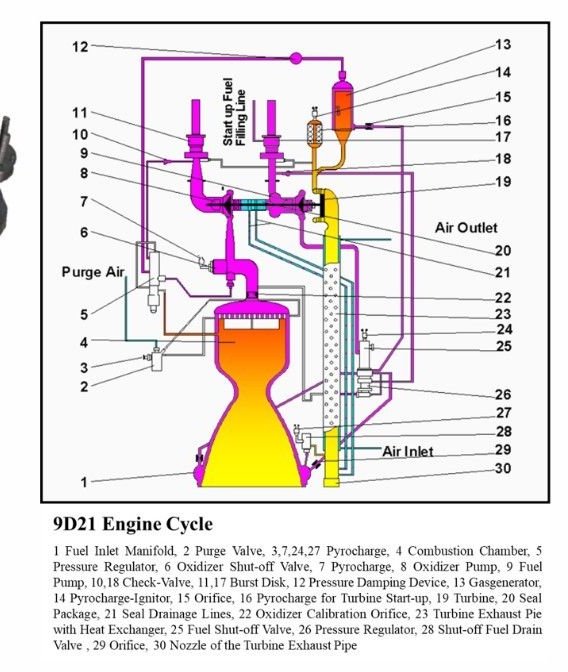 Each of those pyro charges is associated with a valve; according to this page on Norbert Brügge's site, the pyros actuate the valves to decisively start and stop propellant flows:

Ignition is accomplished by a hypergolic start fuel designated TG-02 "Samin" filled into the fuel line at the main fuel valve. TG-02 consists of 50 percent Tri-ethyl Amine and 50 percent Xylidiene. The propellant fed system is a turbo pump driven by a bipropellant gas generator using the main propellants. The start and shut down valves are one shot devices, actuated by pyrotechnic charges.

Prompt shutoff of engine thrust is nice to have in a tactical ballistic missile in order to accurately control range, although the Scud does have active inertial guidance, so it may not be totally critical.

Here's a representative pyro-valve (obviously not the same one that's used in the Scud series) that's available in normally-open (i.e. explosively-closed) or normally-closed form; it works with a variety of fluids. I know "IPA" stands for isopropyl alcohol, but I think it's hilarious to imagine they tested it with India Pale Ale.

Not the answer you're looking for? Browse other questions tagged engine-design launch-vehicle or ask your own question.

22
Why was the engine of the launch vehicle recently tested in Iran "not a very good missile engine"?
2
Apollo LM explosive valves

3
Limiting factors of liquid rocket engine thrust
5
Detonation Liquid rocket engine
0
What organizations correspond to the logos on this ORBITEC Vortex engine rocket?
1
Where can I read further on the specs the South Korean engine for next month's sub-orbital test?
4
Quantitative plots of v, T, p, vs position from chamber through nozzle to ambient for a few canonical modern engines?
22
Why was the engine of the launch vehicle recently tested in Iran "not a very good missile engine"?
3
Why was the Energia’s payload capacity to lunar orbit greater than its payload capacity to geosynchronous orbit?
7
Which are good resources to learn more about the components of a rocket engine?