How would you move in low gravity without a suit?

Assuming your in a habitable environment, how would you move on a planet or moon with significantly less gravity without the encumbering EVA suit?

My answers to very similar quesions, " What would the human gait look like on Mars?" and "How would humans with appropriate equipment travel the surface of Saturn's moon Titan on foot?" are cogent here, along with a couple other concepts. But the answer depends on what "significantly less gravity" means.

First, being in an environment where you don't need any kind of bulky suit to stay alive, as you specify, makes a huge difference. Such suits, especially pressure suits and especially hip joints, are far less flexible than regular clothing, and make some alternate gaits less effort than the traditional walking gait. The Apollo astronauts found this during their walks on the moon, adopting the "hop". With only normal clothing, considerations other than flexibility become more important.

The normal, bipedal walking gait on Earth is a fairly efficient mode of transport if you don't have wheels. It makes use of pendulum-like motion (along with muscular contractions) of one leg to bring it from behind the walker to in front of the walker, and then muscular contractions to pull it back behind. In Earth's gravity, and at a "comfortable" pace, that pendulum motion provides a substantial part of the energy needed to move the leg in front. If you walk faster than that comfortable pace your muscles come more into play, moving the leg faster than the natural pendulum rate, so you expend more energy.

The magnitude of the gravitational acceleration has a direct effect on pendulum period: $$\tau = 2\pi\sqrt{\frac{l}{g}}$$ where $\tau$ is the period of the pendulum, l is the distance from the pendulum's pivot point to its center of mass, and g is the magnitude of the gravitational acceleration. You can look at the time it takes to move the leg from back to front as half a pendulum period, so that time increases as g decreases. If you want to move your leg faster than gravity will do naturally, you have to supply energy with muscles. This is why "significantly less gravity" affects the answer.

As @Uwe says, if gravity is very, very low, you move around pretty much like people in free-fall. Despite having a defined "up" and "down", the low gravity makes the natural pendulum period of a leg so long that nobody would put up with the slowness of an Earth-like gait. And weight is so small that both legs and arms can supply the forces needed to overcome it. Weight is also so small that someone trying to use muscle power to speed up leg motion is likely to launch themselves off the floor for some distance, probably rotating. In the time it takes to get back to the floor in that low gravity the rotation would have them at some awkward angle. They might possibly hit a ceiling. Free-fall-like movement is more controllable.

If "low gravity" is more like half a g, then it would be more Mars-like, a slower version of Earth-like: the natural pendulum period is increased by ~40% so the "comfortable" gait is about that much slower—not too bad!—and a reasonably faster walk isn't going to make you fall or bump the ceiling.

In between, say 1/6 (lunar) or 1/7 (Titan) g, the Earth-like gait is getting pretty slow, but if you're not in a hurry that's OK. If you are in a hurry, then the fast-walk gait is still probably OK, up to a point: the more force you apply with muscles, the more likely you are to get into a situation like the "very low g" case mentioned above. Beyond that point, and short of a run (see below), the Apollo hop might be useful, because it involves less swinging of the legs. But...

Starting and stopping probably takes some adjustment. You still have 100% of your inertial mass but with reduced g the frictional force available for starts and stops is reduced, requiring more advance planning, especially from fast walks or runs.

Runs are a bit more challenging because they involve time out of contact with the floor. On Earth that time is very short, so slight errors in muscle contractions that impart slight rotation to the body don't result in the body rotating to a distinctly suboptimal orientation (prat-fall, butt-plant, or falling over to one side). But in low g that time is longer so errors are multiplied. And now the inertial forces are much greater than frictional forces, so correcting those errors can't be done as quickly.

The changed ratios of inertial forces to gravity-related or frictional forces bring about other control issues. For instance, if one is walking and slight errors cause a lean to the right, on Earth placing the right foot a bit farther to the right on its next step places that foot to the right of the line straight down from the center of mass, resulting in a correcting force to the left. It doesn't take moving that foot very far to the right to get a significant correcting force. If the angle between the line from the body's center of mass (CM) to the foot's center and the vertical from the CM is $\alpha$, then in the static case the resulting gravity-related horizontal component of force is $$F_h = mg \sin{\alpha}$$ so the correcting force is proportional to g. At low g the ratio of the gravity-related correcting forces to the inertial forces decreases, giving the walker (or runner) less control authority. Without practice this will probably result in what we would consider exaggerated leaning and weaving during walking or running.

Inertial forces arising from vertical movements of the CM during walking and especially running make this somewhat more complicated, but don't alter the result: control of walking or running movements at low g will take some practice.

(if you have time, also watch Virtual Moon Colony at Lalande Crater - the Whole Thing) 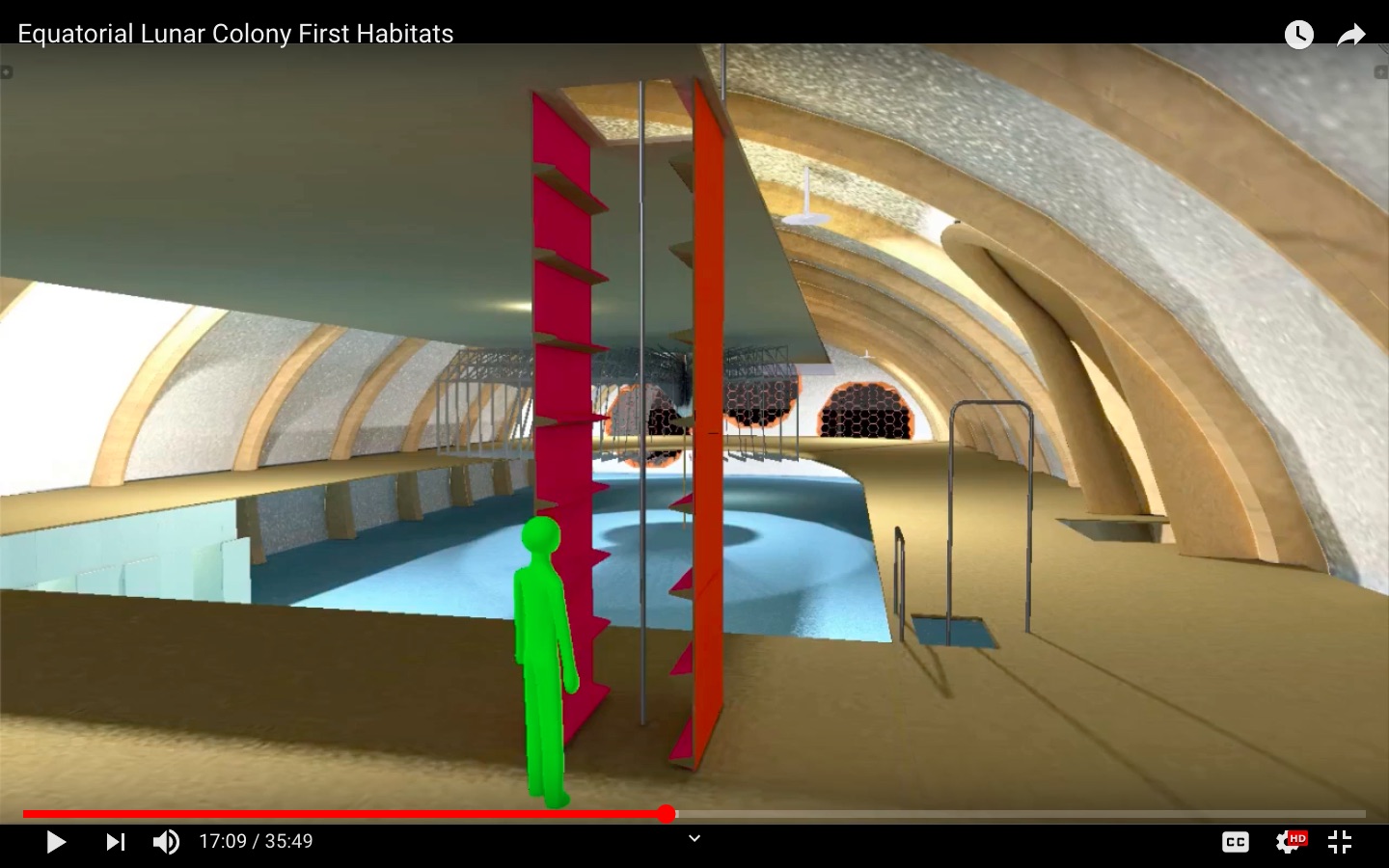 above: Steps in the Moon's low gravity will look very different. Forwards (lateral) motion is not necessary and in fact can make you loose balance very quickly (as can be seen in those astronauts falling down on the moon videos. Instead to move up or down, a simple vertical shaft can be ascended or descended with these modified steps, assisted by grasping a pole. There are several options for using this system depending on how much of a rush you are in or how playful you are feeling. 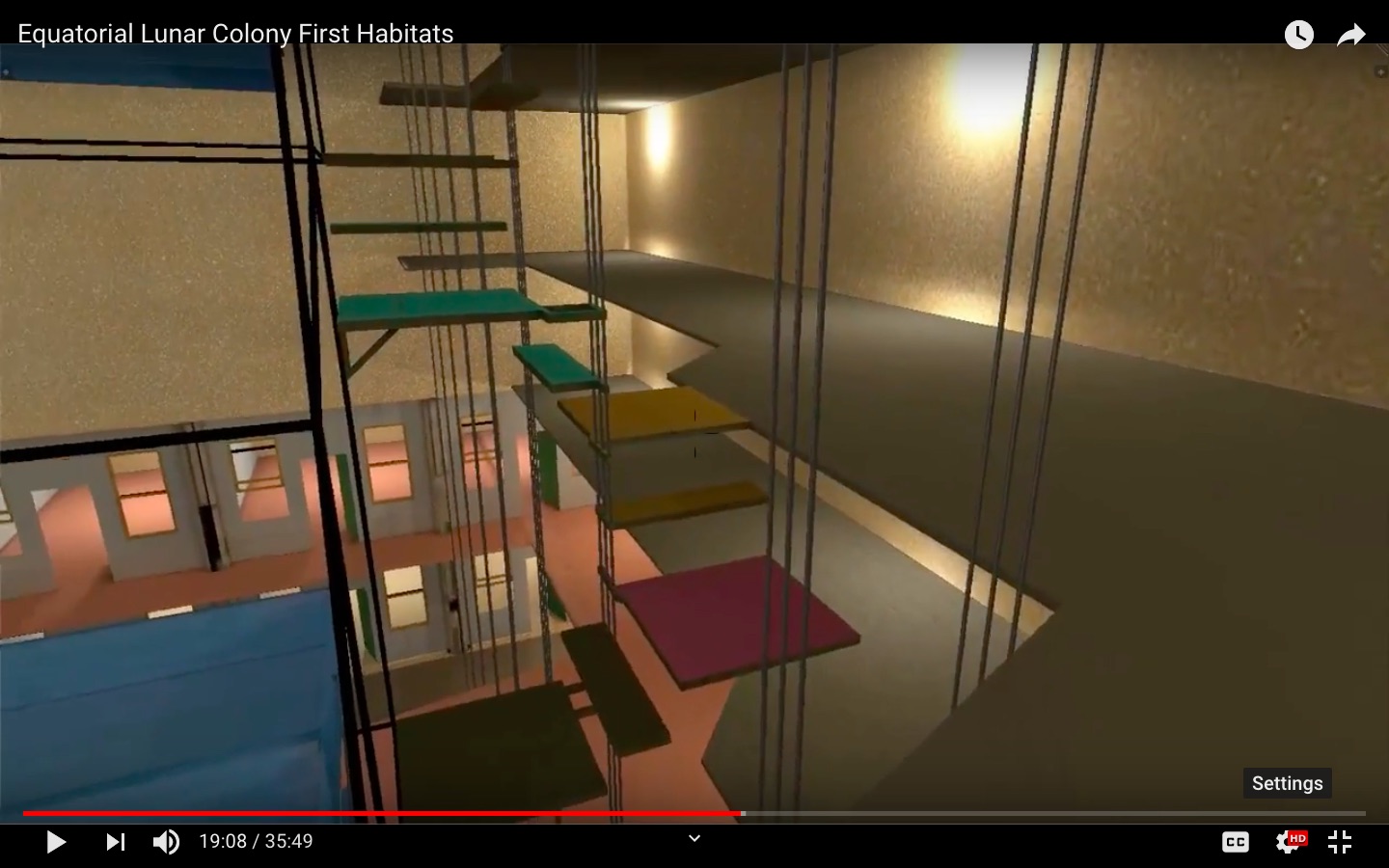 above: Another variety of low-g steps: 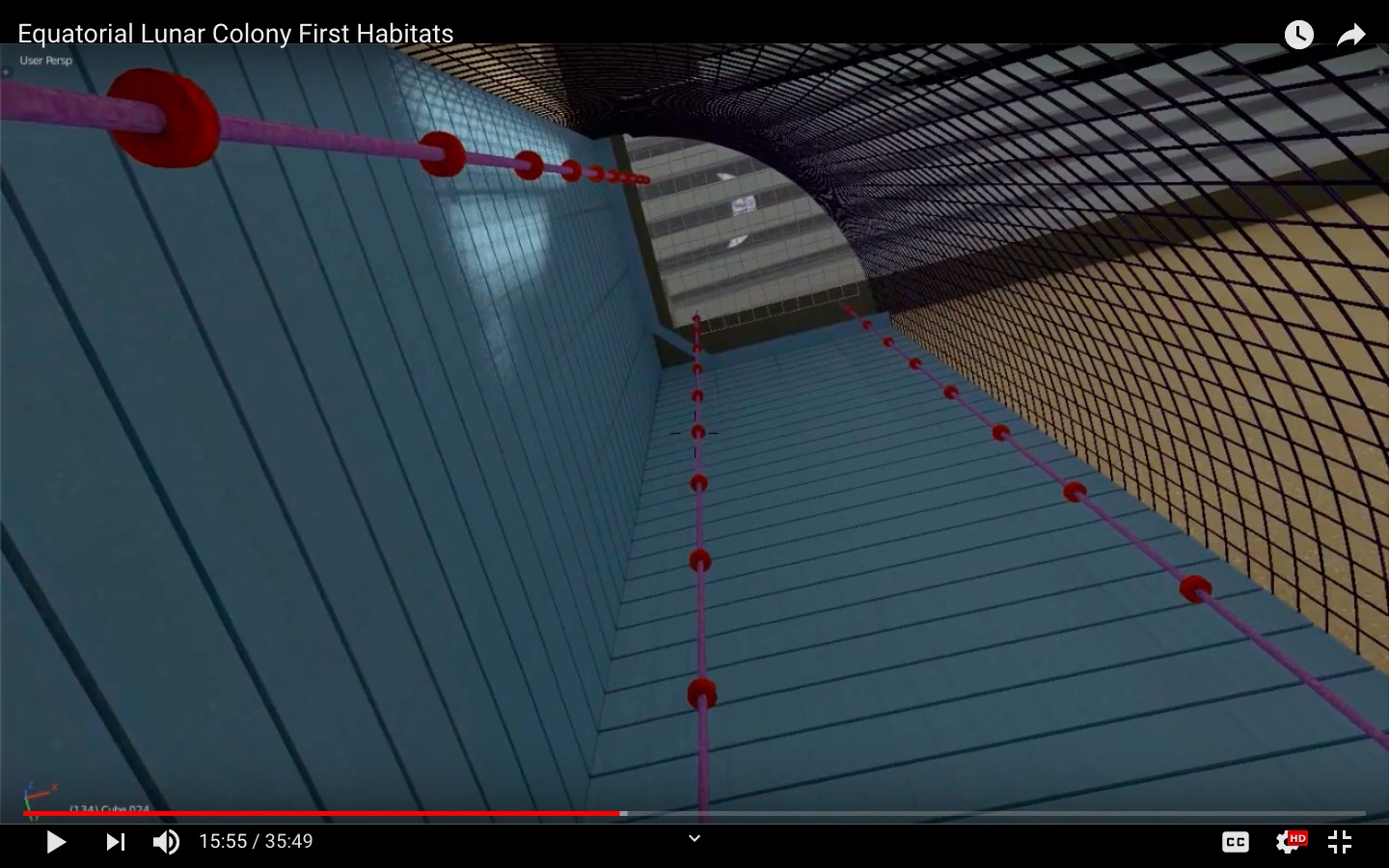 above: In low gravity recreation will be truly 3D. Why use valuable floor space when you can move around vertically almost as easily!

Not the answer you're looking for? Browse other questions tagged colonization gravity moonwalking or ask your own question.

32
What are the 'lights' inside Shuttle main engines at landing?
7
Any scholarly or serious work in Sports Science for the low surface gravity of Mars or the Moon?
2
Any published biophysics or sports physics research on how much top running speed might change on Mars or the Moon? (Indoors, not in a suit.)

32
How far can you fall on the Moon without injury?
12
How would a zero gravity cat litter box work?
5
Would it be possible to use a modern Orlan-MKS space suit for a moon walk?
2
How do you calculate gravity loss (simplified)?
1
What is the highest gravity planet we could launch a single person from?
2
Would more or less gravity make you proportionately stronger?
3
How low would gravity have to be for the balance system to fail?
3
If you fell into a crater on the moon in your spacesuit and no jetpack, is there a way to use low gravity to get out of the hole?
5
Why are all possibly habitable exoplanets higher mass than Earth?
8
What does the Moon's gravity feel like? If you don't move, could you still tell you're on the Moon?