Could Hubble observe the night side of the Moon?

IIUC the Hubble space telescope cannot observe the Sun lit side of the Moon. And Hubble is never pointed closer than 90 degrees towards the Sun. But this still allows for observing the night side of the Moon during phases between full moon and half moon.

Note: This is not asking about the far-side of the moon.

The night side of the Moon is illuminated by Earthshine and the brightness depends on the phase angle of the moon (and the weather on Earth (clouds, wind-induced waves on the ocean) and the time (ocean versus land) but we can find some averages. Let's use +15 magnitude per square arcsecond from below with a as a representative number. It gets a bit brighter at small phase angles when the Earth's mostly sunlit side faces the Moon, but then the Hubble would be starting to point dangerously close to the Sun.

That makes the night side of the Moon (26 magnitudes dimmer) about 1.4E-16 Watts/pixel.

From Measurements of the Surface Brightness of the Earthshine with Applications to Calibrate Lunar Flashes (also here):

We have used the large database of photometric observations of the bright and dark portions of the face of the Moon from the Earthshine Project at Big Bear Solar Observatory to determine the surface brightness of the earthshine and its variations. Our purpose is to make these observations appropriate for the calibration of lunar flashes according to their magnitude. We have evaluated the daily, seasonal, and annual changes in magnitude for our entire data set and have also calibrated the surface brightness of the entire lunar geography for several lunar phases by means of the observation of lunar eclipses. We find variations between +12 and +17 mV arcsec² with hourly changes upward of the order 0.25 mV arcsec², which are uniquely due to the terrestrial meteorology. This rapid change in the terrestrial flux reaching the Moon is usually neglected when calibrating the magnitude of lunar impact events. We justify this using earthshine observations to determine the brightness for the day, time, and selenographic location of a given event in order to improve the accuracy of its brightness calibration up to 0.25 mag.

Hubble can in fact observe the Moon, and has done so. Here's a picture of the Apollo 17 site (The upper right is from Apollo 17 mission itself). The x shows where the actual site is. You can also see more Hubble pictures of the Moon at this page. 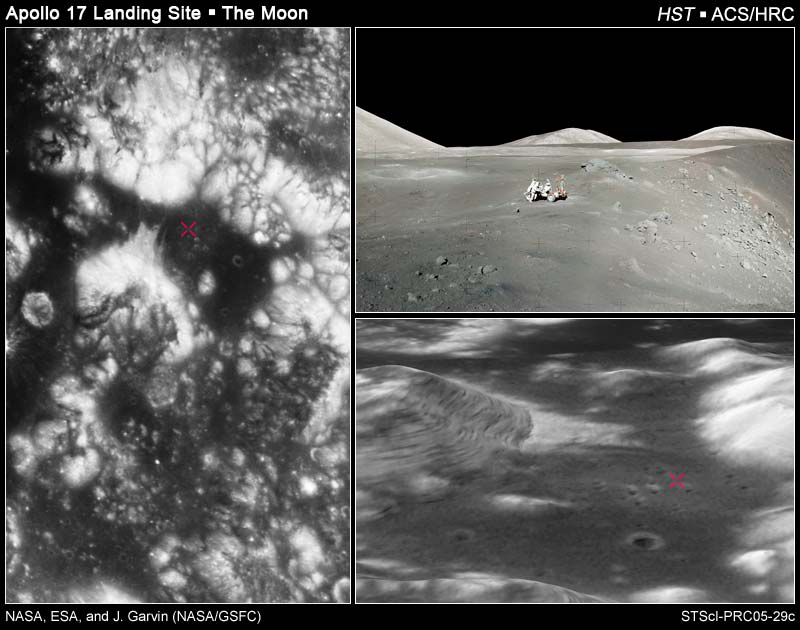 I believe COS (the sensitive UV instrument) could be damaged if it were pointed at the illuminated moon. (I wasn't able to find any documents online that confirm this though) The instruments don't point in the same direction. So it's possible to orient the telescope so that one is not pointed at the moon while others are.

Lunar observations are difficult because the platform isn't really designed to track moving objects. So it can't sit and stare at a location. I'm sure any hubble images would have some value, but the resolution will be nowhere near that of LRO.

Not the answer you're looking for? Browse other questions tagged the-moon observation hubble lro or ask your own question.

3
Is it possible to capture geostationary satellites with DSLR?

21
How could we observe the Oort cloud, if it exists?
10
Could the Hubble HST be saved by docking with the ISS?
4
What viewing angles does the Hubble Space Telescope use during its orbit in LEO, avoiding the Sun and Earth?
8
Could the spherical aberration of Hubble have been solved using only software techniques?
10
Which side of the Moon faces Earth, the heavy side or the lighter side?
7
Can I observe a Venus transit before 2117 from a spacecraft in the Earth-Moon neighbourhood?
16
What did the Hubble fix look like?