How to get an initial setting of the range gate for a Lunar Laser Ranging using a new Retro Reflector for the first time?

From an answer to this question

They were searching by aiming their laser at the moon and looking for reflections. But the system is set to only detect photons in a very narrow range of distances (~10 m) so searching this way takes a long time. This is called a range gate: only photons arriving within a timeslot that corresponds to 10-80 m of range are accepted; this helps eliminate spurious photons (random reflections off the moon's surface, etc), but means you can only search in a tiny space at a time.

To use a new Retro Reflector on the Moon for the first time, an initial setting of the range gate time slot is needed to get a first result of Lunar Laser Ranging.

But how to get the distance of this reflector with a precision of about 100 m? From a electronic ranging measurement to the LM used by the Apollo astronauts installing the Retro Reflector?

Almost for sure initial ranging was done by radar. As radar became more advanced following WW2, the Moon loomed large in the sky as a giant target, who could resist?

In 1946 a modified military radar signal at 111.5 MHz was successfully bounced off the Moon and received. The following is from K3PGP's Experimenter's.Corner post Radar Echoes From the Moon January 1946 by Jack Mofenson, Evans Signal Laboratory, Belmar N.J. 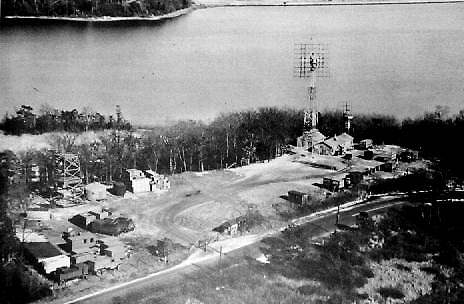 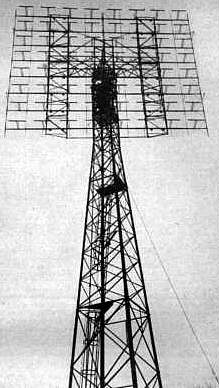 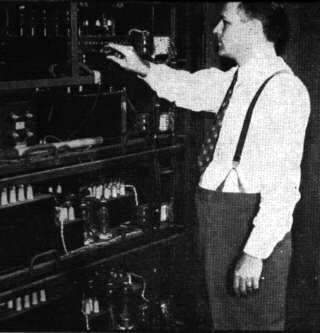 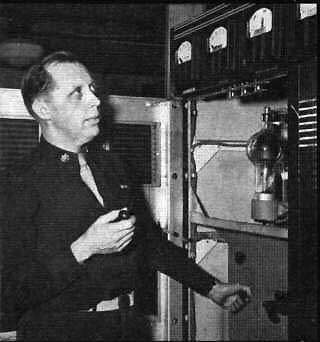 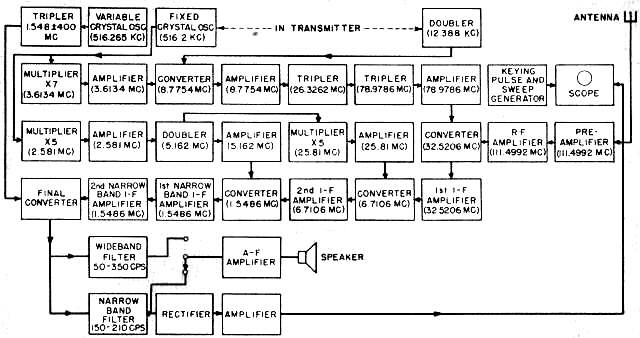 THE RECENT EXPERIMENTS performed by the Signal Corps Engineering Laboratories in receiving radar echoes from the moon have aroused much comment from engineers, astronomers and others engaged in technical pursuits. Although the scientific aspects of sending radio frequency signals through the ionosphere are certainly of importance, the work done on the project is better classified as an engineering achievement. As yet, no long term systematic observations have been made. This article is confined, therefore, to a discussion of the technical characteristics and general description of the equipment employed. Briefly, the experiment consisted of transmitting quarter second pulses of radio frequency energy at 111.5 mc every four seconds in the direction of the moon, and detecting echo signals approximately 2.5 seconds after transmission. Display of the detected signals was audible as well as visible. Technically, the experiment utilized well established radar techniques, but with radically different constants throughout the system. Considerations of pulse width, receiver bandwidth, transmitter power and the precise frequency of the returned signal due to Doppler effect, were such that careful attention had to be given to the design of the overall equipment.

After preliminary calculations were made concerning transmitter power, the reflectivity coefficient of the target, and receiver noise figure, it was apparent that receiving radar echoes from the moon was technically possible. Under the direction of Lt. Col. John H. DeWitt, a project called "project Diana" was set up in September 1945 to develop a radar system capable of transmitting rf pulses to the moon, and detecting echoes more than 2 seconds later. Prior to entering the Signal Corps, Colonel DeWitt, who at that time was chief engineer of Radio Station WSM in Nashville, Tenn., designed and constructed transmitting and receiving equipment for the purpose of receiving echoes from the moon. This equipment employed substantially similar transmitter power and frequency to that used by the Signal Corps, but the attempt was a failure due to insufficient sensitivity in the receiver. Colonel DeWitt's appreciation of the problem and personal supervision were the driving forces that made the present experiment successful. Assisting Lt. Colonel DeWitt were: E. K. Stodola, Dr. Harold D. Webb, Herbert P. Kauffman and the writer, all of Evans Signal Laboratory. Credit is also due the members of the Antenna and Mechanical Design Croup, Research Section, Theoretical Studies Group and others.

The practical implications of radar contact with the moon are numerous. During the war the Germans used the V2 Rocket which climbed some 70 miles above the earth, and the future holds the unhappy prospect of missiles going far higher than this. The matter of transmission of radio signals to great distances above the earth for detection and control of such weapons becomes a problem of military importance. Further, the use of a reflector far beyond the earth for radio waves makes possible direct measurement of the ability of radio waves to penetrate the ionosphere. A more complete investigation in this direction is indicated. The possibility of using the moon as the reflector for a part time long distance point to point communication system is also being considered, as well as using the moon as a target to measure field strength patterns.

By 1965 radar ranging measurements and topography mapping of the Moon had become fairly accurate. According to the 1965 IAU Symposium contribution The mean distance to the Moon as determined by radar all of the other errors had been managed and the limits on the absolute range (a few hundred meters) was the propagation velocity!

It seems that the speed of radio waves in a vacuum was uncertain to about 1 part per million in 1965. Certainly by the time that nanosecond lasers were starting to make ranging measurements, the errors on the radar ranging would have been sufficiently reduced to make them comparable with the requirements for time-gating of the protonic measurements.

Distance measurements point-to-point were not the limiting factors here though. The uncertainty in the diameter of the Moon itself made the final determination of the separation of body centers uncertain to 1.1 kilometer!

Recent geodetic determination of the Earth’s equatorial radius (Kuala 4, Fischer 5) indicate that a correction of about -100 m to the value of a given in table I is required. Hence, with Δr=-0.1 km and allowing for an error of Δb = ±1km, and Δc = ±300m, the final result becomes

The accuracy of the value of $\bar{s} in the radar method is limited primarily by the uncertainties of the lunar radius and the velocity of radio wave propagation. 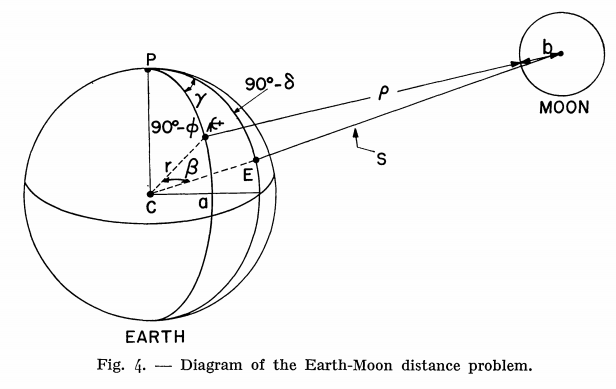 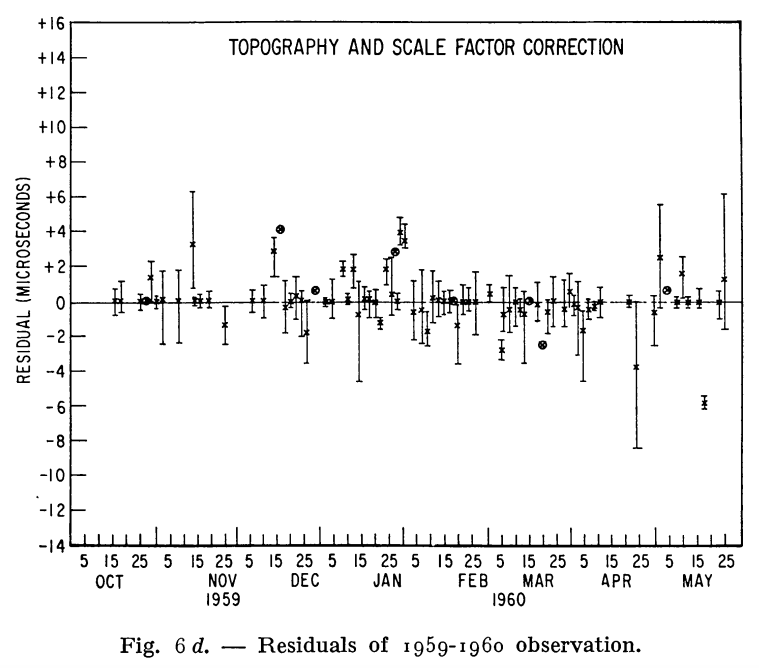 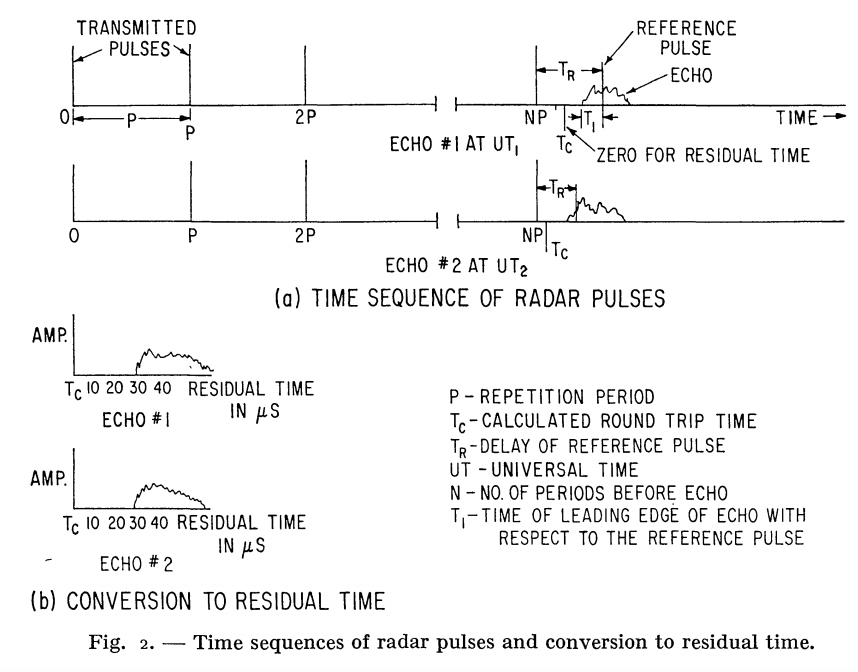 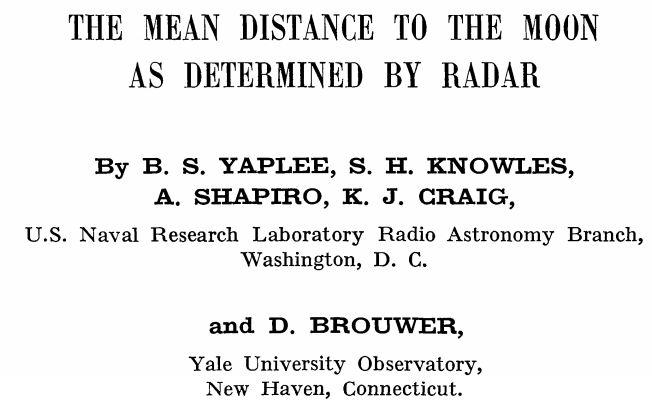 NASA had not only radar data with a precision of about one km.

The unified S Band system used for the communication from Earth ground to both the Command Module and the Lunar Module transmitted voice, data and ranging signals in both directions. 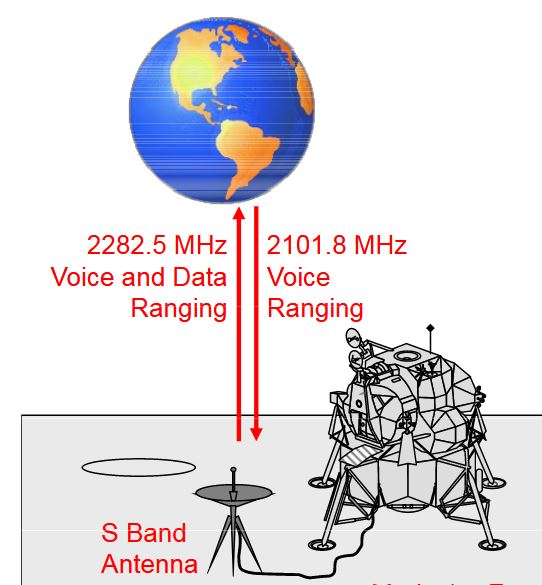 For ranging pseudo random signals were used to acheive a resolution of about 1 m and a precision of about 15 m. 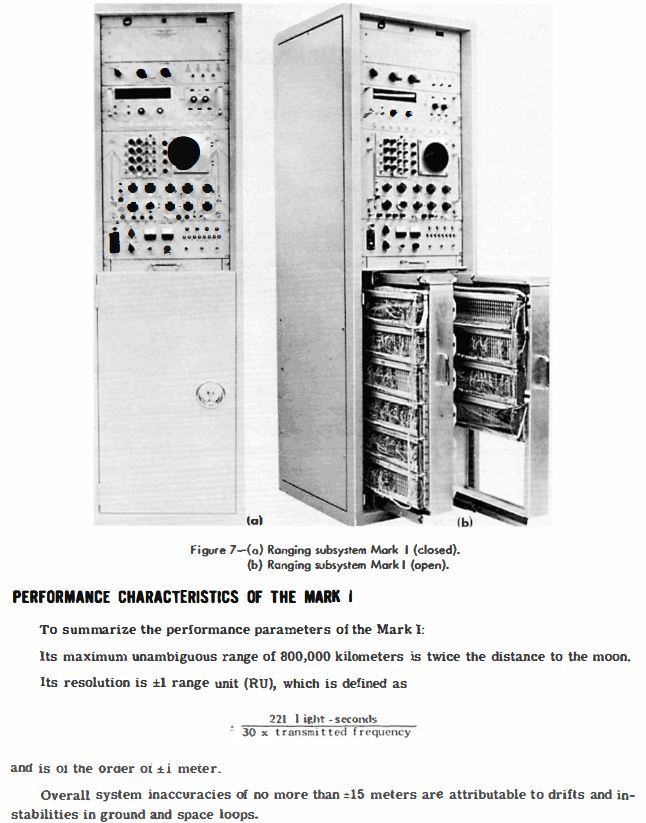 This way they had a specific distance from Earth to the respective LM. The retro reflector was deployed nearby only some meters higher or lower than the LM.

12
How did Lunokhod 1 become "lost" in 1971; in what ways did astronomers "look for it" after that?
5
Is there a way (working or in development) to track satellites in lunar orbit like we track objects in Earth Orbit?
5
How soon after "The Eagle" landed did they first attempt to bounce a laser off the Moon? When did it first succeed?
5
What is that hissing and buzzing background noise on some of NASA Apollo audio recordings?
2
What do these Apollo era terms mean?

8
What are these structures on the Lunar Ranging Retro Reflector (LRRR) arrays for?
5
How soon after "The Eagle" landed did they first attempt to bounce a laser off the Moon? When did it first succeed?
1
Why does LRO's laser altimeter telescopes use lenses instead of mirrors?
7
What Soviet signals (if any) attempted to scramble communication and sabotage Apollo missions?
2
How did LADEE and LDRC measure it's distance from Lunar orbit to Earth to 1 centimeter accuracy using optical communications?