How might SpinLaunch actually spin something fast enough to launch it into orbit?

update: TechCrunch's SpinLaunch spins up a $35M round to continue building its space catapult is worth a read and contains this cool rendering. 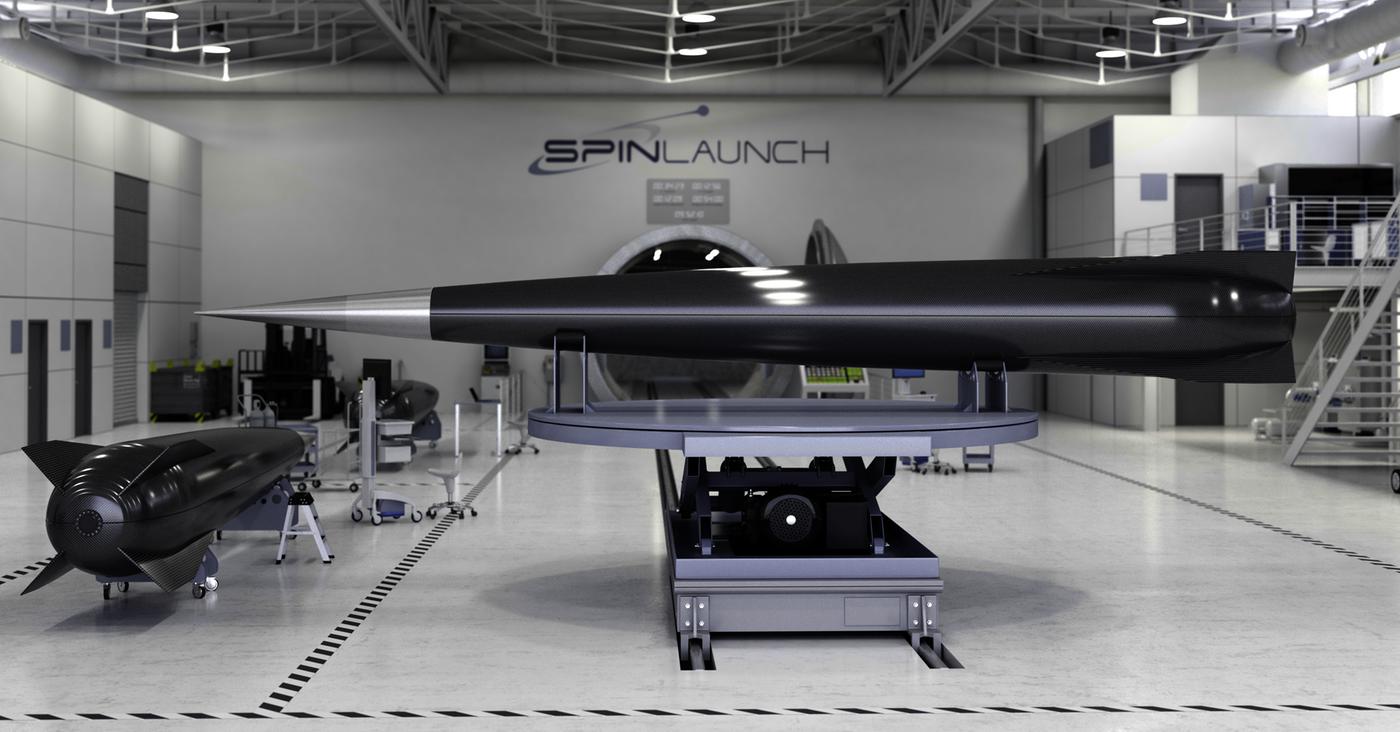 SpinLaunch signs deal with Spaceport America. Spaceport America has announced that SpinLaunch has signed a lease to conduct tests at the facility in southern New Mexico and that the company will invest up to $7 million in facilities there, Parabolic Arc reports. The company considered several locations for the test site, but the New Mexico-based site provided the best mix of affordability and location.

A novel approach ... SpinLaunch is developing a kinetic-energy launch system that would spin in a circle at up to 5,000 miles per hour before it is released to fly to space. The system would not use any propellants, and the company has reportedly raised $40 million in venture-capital funding. We're intrigued but will remain skeptical until we see some test flights. (submitted by Ken the Bin)

That's 2222 meters/sec so I'm guessing they are only talking about building a suborbital demo? Or does it have a propulsive "2nd stage"?

The Wikipedia article SpinLaunch doesn't say much about how this is going to work:

SpinLaunch intends to develop a space launch technology that aims to reduce dependency on traditional chemical rockets. Instead, a novel technology will use a large centrifuge to store energy and will then rapidly transfer that energy into a catapult to send a payload to space at up to 4,800 kilometres per hour (3,000 mph). If successful, the acceleration concept is projected to be both lower cost and use much less power, with the price of a single space launch reduced to under US$500,000.[2] The speed required to maintain Low Earth orbit is 27,000 kilometres per hour (17,000 mph).

The last sentence is a bit unusual as it seems to be a disconnected factoid, as if it wants to remind us that the company's numbers are deeply sub-orbital without coming out and saying "their current speed is way too low to go to orbit!"

Their website doesn't seem to address the issue either.

Is there any engineering information out there on the feasibility of spinning something to orbital launch velocity while on the ground and then letting it go? I don't need the blueprints, but at least an informed discussion or educated speculation.

One thing I wondered about is whether this idea is plausible at all. I think it's pretty clearly not for reasons I'll go into below, but the initial question is can you make something strong enough to do what you want to do ignoring practical considerations?

So, first of all let's consider a simplified thing: two equal masses connected by some kind of light cable being spun, and at some point you'll let go of one of the masses (and deal with the other one, and the cable, somehow...) The question is whether you can make the cable strong enough.

Let the masses be $m$, the cable have length $2r$, and the angular velocity of the thing be $\omega$. The masses are moving with speed $v = r\omega$, and the centripetal acceleration is $a = r\omega^2$. So the tension in the cable is

So we can rearrange this to get $d$, which is the interesting thing: we need $d$ to be really small otherwise our approximation goes horribly wrong as the cable is not light and you have to do harder sums.

So in the light-cable approximation then you get:

(I have convinced myself that this is OK dimensionally, anyway).

So, let's assume you want to give something escape velocity, and you're going to use carbon nanotubes to make the cable. Let's assume:

So, well you could probably build such a thing, but I'm pretty sure the 'light cable' assumption is wrong and you'd have to take account of the mass of the cable. This might kill you, but my intuition is it won't.

One additional thing we can work out (thanks to Christopher James Huff for pointing out that I probably should) is what the centripetal acceleration of the thing is just before launch. From the expressions $v = r\omega$ and $a = r\omega^2$ it's easy to get $a$ in terms of $v$ and $r$:

This shows why larger structures are better, but also why higher launch velocities are bad news. For our proposed $100\,\mathrm{m}$ radius launcher, at escape velocity, we get $a \approx 1.4\times 10^6\,\mathrm{ms^{-2}} \approx 145000\,g$, where $g$ is the acceleration due to gravity. The object we're launching is going to have to be very, very tough.

Things get better the larger you make the structure, because the acceleration goes down as it gets bigger. But I think there are practical limits to how big you can make the structure. In particular if the cable breaks just before launch then the objects you are about to launch will hit the structure at roughly escape velocity. For my $1\,\mathrm{kg}$ masses the energy you need to absorb is $1.4\times 10^8\,\mathrm{J}$, which is the equivalent of about $34\,\mathrm{kg}$ of TNT. And you probably want to launch substantially more than that mass.

Indeed, when you let go the mass you want to launch then you have to deal with the other mass anyway. If you want to launch a tonne, then you have to deal with something equivalent to exploding $17\times 10^3\,\mathrm{kg}$ of TNT. This is equivalent to a large conventional bomb (an earlier version of this answer compared it to the Trinity test because I got kilogrammes & tonnes confused when thinking about it: it's nowhere near that).

This is why I assume you can't build a really large structure: if you want to launch a significant mass then you need to deal with something equivalent to the explosion of a nuclear weapon happening inside the structure, anywhere. This has to be a really substantial structure, and building a really large one will be very, very expensive.

Note that this sort of thing is a problem for any kinetic-energy launch system: if you are going to launch a mass $m$ at velocity $v$ then it's going to have energy of $mv^2/2$ at the point of launch, and you need be ready to dissipate that energy if it is released really abruptly. Of course a rocket-based system also has to deal with dissipating all the energy stored in the fuel, but fuel explosions are a lot less abrupt than something hitting you, and they also have the advantage that the object causing the trouble is moving relatively slowly so you can reliably predict where the trouble will be.

Why I think the whole idea is silly in practice

Quite apart from the fact that doing anything serious with this involves containing explosions equivalent to nuclear weapons and building payloads which can withstand tens or hundreds of thousands of gravities of acceleration, there is a question of what happens to the object you have launched. In particular this object is travelling at escape velocity through dense atmosphere. I'm not competent to do the sums, but I imagine that this is just catastrophic: how much energy does it lose? How much faster do you have to launch is as a result, naking everyting even worse? How hot does it get, & what do you have to make it out of to ensure it can survive. What happens to anything near the launch site?

I think it's all just mad: this whole idea is a silly toy.

There is lots of information on spinning things fast. The main problem is that at high speeds, the centrifugal force exceeds the tensile strength of the material.

The Bloodhound SSC team ran into this limit when designing the wheels for their car. At 1600 km/h, the wheel rims (with a diameter of 900 mm) experience 50,000 G. SpinLaunch wants to go 5 times faster than that?

Smaller objects can go faster: you can get ultracentrifuges that operate at 1 MG.

There's also a balance problem. An ultracentrifuge has to be finely balanced, or it'll break up. When you launch an object from a spinning contraption, your contraption instantly becomes unbalanced and starts wobbling.

28
Would a grinding machine be a simple and workable propulsion system for an interplanetary spacecraft?
15
Could we send a projectile to the Moon with a cannon?
9
How does Spinlaunch manage the counterweight right after launch?
3
What does 'a nudge' mean in the context of rocketry?
5
Has anyone suggested using an electrically powered sling or centrifuge mass thrower as a form of electrically powered spacecraft propulsion?
4
Fastest Manmade Object
1
What if we launched rockets from space using the slingshot method and centripetal force? Would that be possible?
1
Will future deep space optical communications "ground stations" actually be in space, or on the ground?
1
Looking for a ballistic projectile technology development company I'd read about a few years(?) ago
1
Why is catapulting rockets still not a thing?
See more linked questions

15
How often are space launches substantially delayed by protests physically at the launch site?
4
What kind of "jet engine-like propulsion" does HyperSciences use to accelerate projectiles to sub-orbital altitudes?
11
What are the biggest challenges for high altitude rail-gun launch systems?
3
What does 'a nudge' mean in the context of rocketry?
1
Looking for a ballistic projectile technology development company I'd read about a few years(?) ago
9
How much energy is lost by damping yaw from a SpinLaunch?