How soon after "The Eagle" landed did they first attempt to bounce a laser off the Moon? When did it first succeed?

The question When did Houston figure out where the Eagle had landed? says (in part):

During Apollo 11's stay on the surface, Michael Collins was given seven different locations to look for the Eagle, all of them wrong. Additionally, an attempt to ping the Lunar Ranging Retro-Reflector shortly after deployment was unsuccessful.

but it gives no source for this information, so I thought it best to ask separately to find the best source(s).

Question: How soon after "The Eagle" (Apollo 11) landed did they first attempt to bounce a laser off the Moon? When did it first succeed to optically measure the distance from the Earth to the Moon? (Radar measurements and then unified S Band radio ranging were used then).

Apollo 11 retro reflector was placed on the Moon on 21 July 1969, the first successful use of the reflector was on August 1 and 3 by the Lick Observatory.

Returns were observed on August 20, September 3, September 4, and September 22, 1969, at the Mc­Donald Observatory.

Attempts were made almost immediately but there was only a brief time available before the moon became too low in the sky on that night. Ground instrument difficulties and weather problems caused further delays. 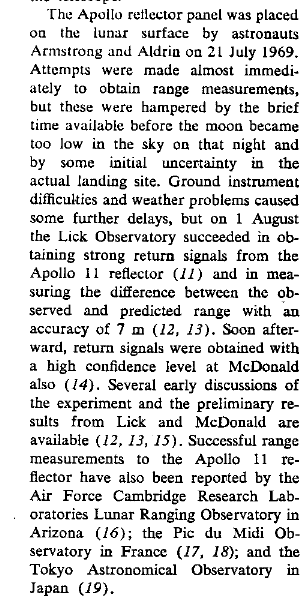 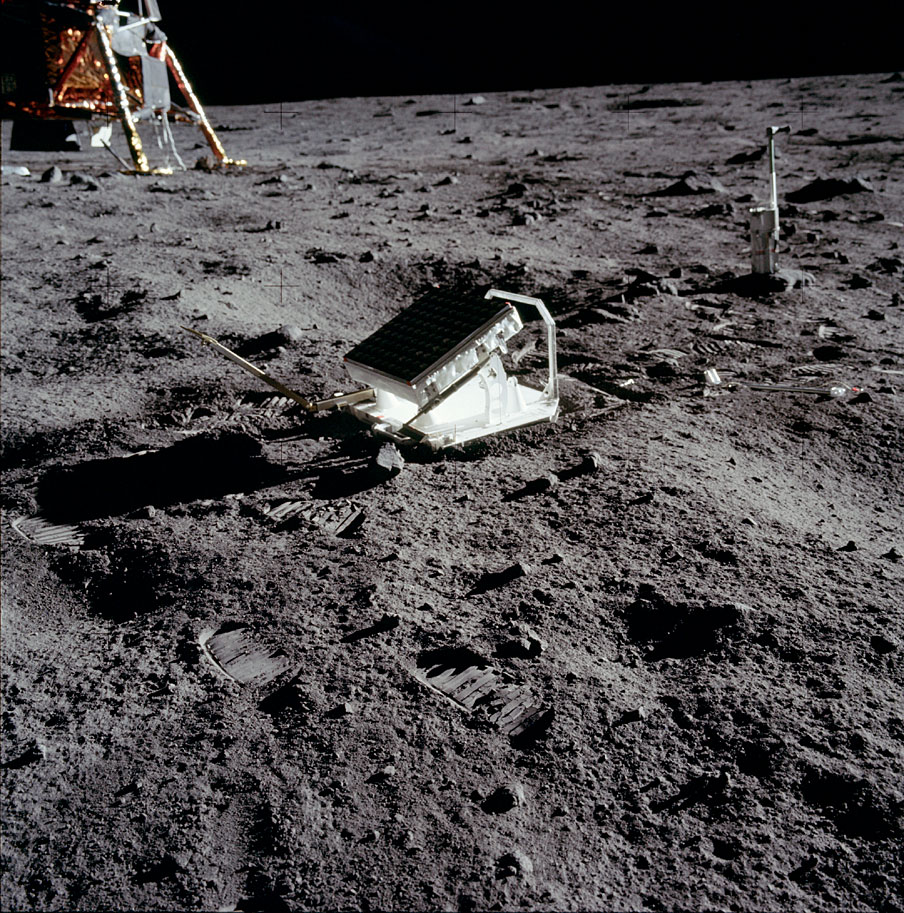 The first use of LIDAR to measure the distance to the moon was in 1962, around seven years before Apollo 11.

The retroreflector arrays left by Apollo 11 and by other lunar missions only made it easier to detect the return pulses.

12
When did Houston figure out where the Eagle had landed?
3
How to get an initial setting of the range gate for a Lunar Laser Ranging using a new Retro Reflector for the first time?
3
What was the most intense beam ever sent from Earth?

36
How did the Apollo 11's Eagle ascent stage find the CSM after leaving the Moon?
1
Could Schiaparelli's retroreflector array (still) be used?
7
Who does these mesmerizing simulations of the phases of the Moon? And how?
13
Why did Neil Armstrong alone, not NASA, end up coming up with the first words uttered on the moon?
13
How did Lunokhod 1 become "lost" in 1971; in what ways did astronomers "look for it" after that?
12
When did Houston figure out where the Eagle had landed?
4
Did Conrad and Bean balk at entering the 650-foot-wide Surveyor Crater, or just express concern? What data had they seen?
2
When they shoot lasers at the Moon for ranging, what is the shape of the beam?