Did every shuttle flight after STS-5 carry EMUs onboard?

The NASA Office of Inspector General's report NASA's Management And Development Of Spacesuits stated that two EMUs were lost in STS-107. This suggests that the shuttle carries EMUs even for mission not planned for EVA.

Therefore, does every shuttle mission after STS-5 carry EMUs?

Yes, every shuttle flight after STS-5 carried EMUs, because EVA repair was counted on as a level of redundancy for several critical failures (most of which never happened, but that's not the point). 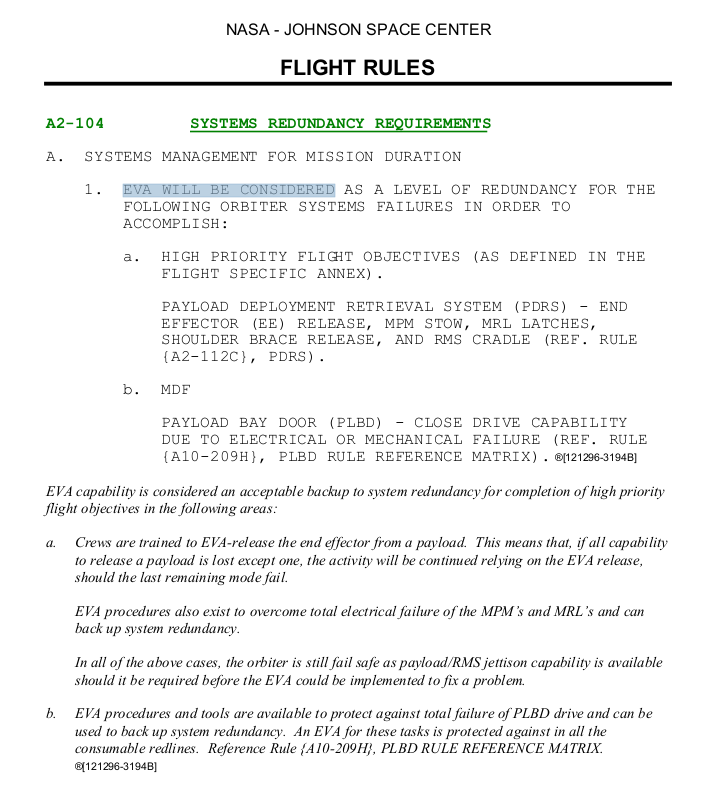 Here are some of the contingency EVAs:

Here's a list from the EVA Checklist (these are generic, there could be additional flight specific ones):

I forgot about the 96 bolt EVA - that one is for if the Orbiter got stuck on the docking system! And yes, they would have had to release 96 bolts (and cut some supply tubing as well...) 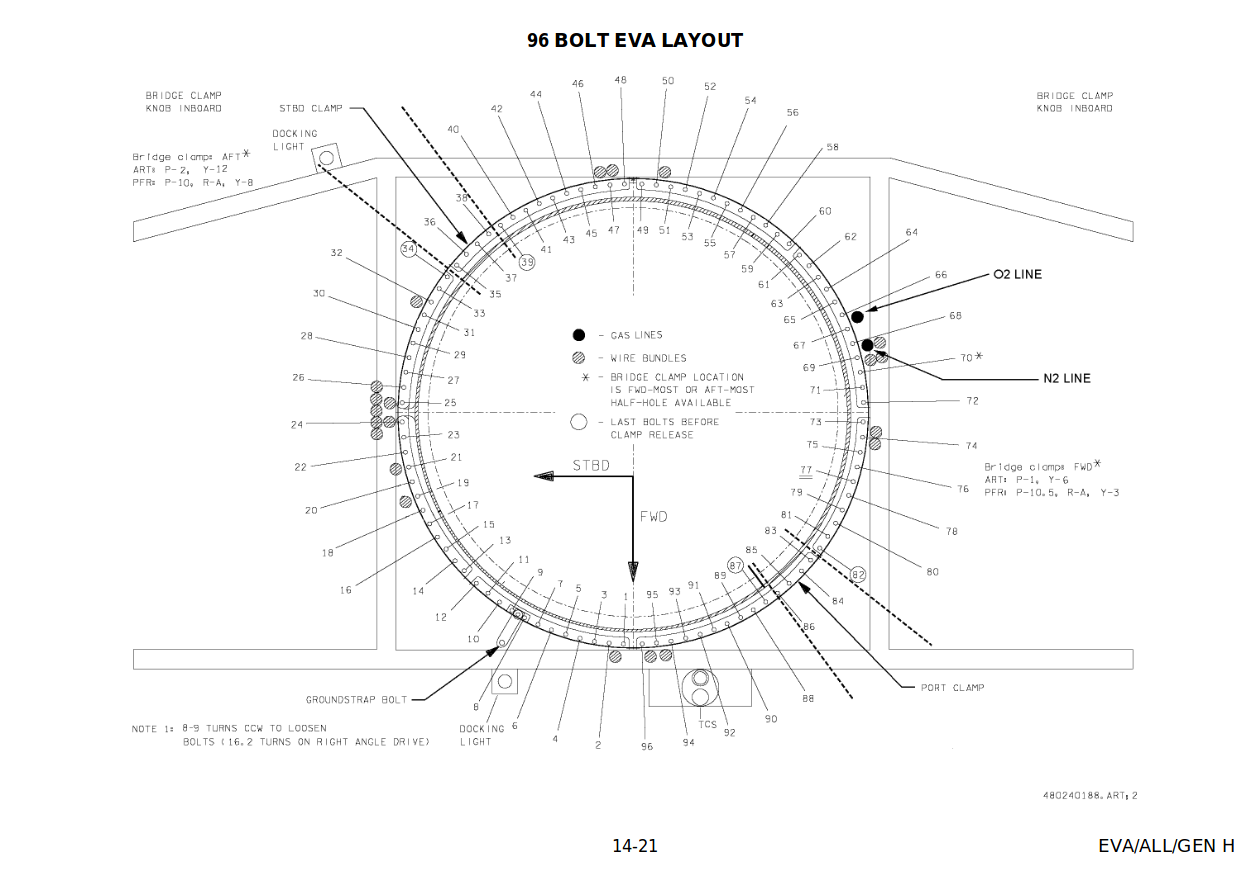 The ET door one was out there too. They would have had to stuff clothes in a duffle bag and throw it through the gap between the inner and outer elevons to get a line to travel to the area on.... (this was written before the Orbiter Boom Sensor System (OBSS) was flown, that would have made it a heck of a lot easier). 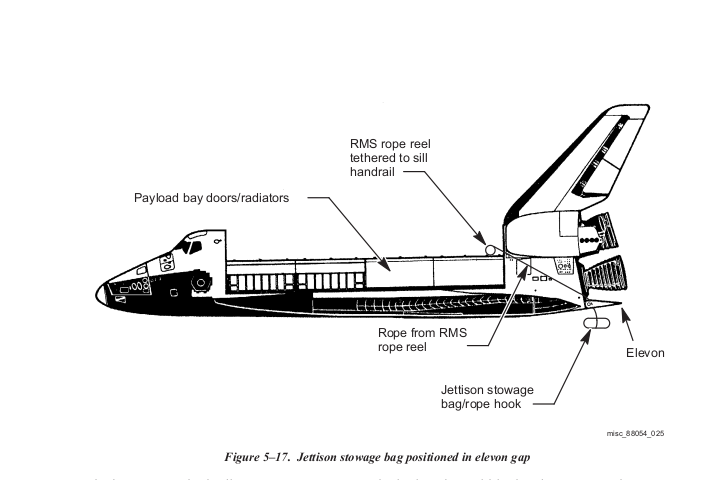 This graphic shows how using the OBSS would have made it easier to access the ET door area. 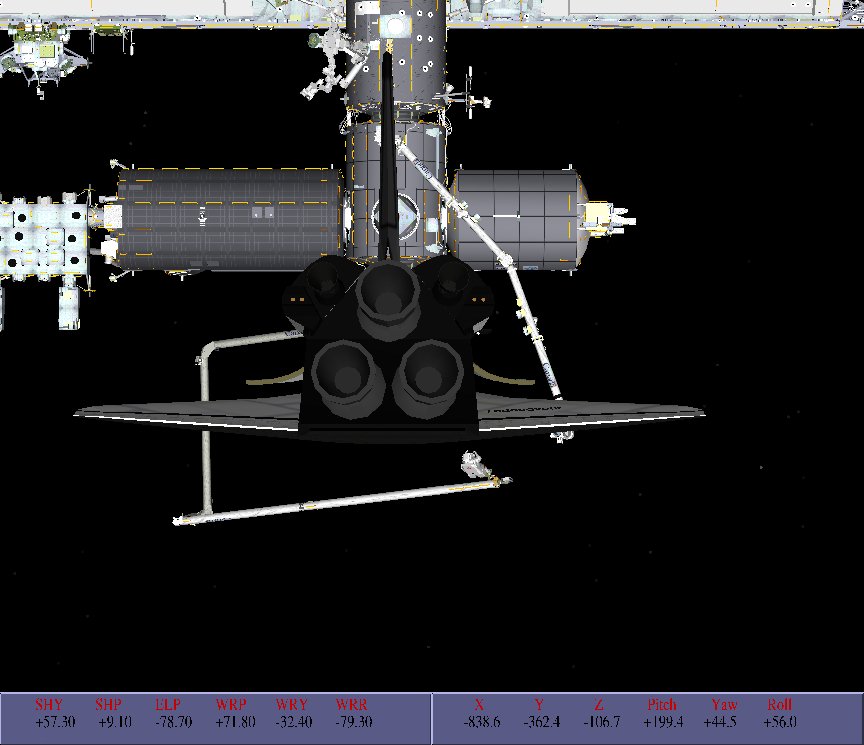 3
Did some Shuttle flights really have no spacesuits aboard?
15
Just how much rope have different crewed missions been given?
7
What effect (if any) would leaving the cargo bay doors open have had during a shuttle reentry?
2
How could Shuttle orbiter with internal airlock dock with ISS or other space stations and were internal airlocks used for missions with spacelabs?
1
What EVA activities were planned for STS-80?

7
What was the design and/or results of the fish experiement onboard Space Shuttle Columbia disaster mission STS-107?
12
Could Orion repeat any of the Hubble Space Shuttle servicing missions?
21
Space shuttle exhaust after landing
0
What is the purpose of this cable connecting Astronaut's boot restraint to a robotic arm?
5
Did NASA archive the audio recording of STS launches
4
Why would a space shuttle have flown a normal first-stage and early-second-stage ascent trajectory during an RTLS abort?
7
Did NASA distinguish between the space shuttle cockpit and flight deck?
7
How many spacesuits were specifically manufactured for John Young?
3
Could DOD earth observation (i.e. spy) satellites have photographed the Columbia Orbiter on STS-107?
6
What were the space shuttle’s emergency procedures for an SRB or ET separation failure?