Which Chinese citizen co-founded JPL? Who are JPL's “founders” in general?

The Wired UK article The epic tale of China's out of this world plan for space domination says:

A Chinese citizen co-founded the JPL, but these days no Chinese officials are allowed on a Nasa site thanks to the US embargo.

Who was that? In fact, who are the "founders" of JPL in general?

tl;dr: Except for the 1939 lunar lander, it seems the projects undertaken during the "JPL's Army years" were related to weaponry (WW2 and after) rather than space exploration. So while the name "Jet Propulsion Laboratory" remained the same, the actual entity we associate with space exploration was not really the one founded by said individuals. The linked article in the question glosses over this difference and tries to create the impression that Qian's JPL is associated with NASA or the exploration of space in some way, which is not the case.

JPL is a child of Caltech: founded in 1936 as a graduate student project under Professor Theodore von Kármán.

Qian Xuesen (钱学森) was indeed part of the beginnings of what was first called the Jet Propulsion Laboratory in 1943:

In 1943, Tsien and two other members of their rocketry group drafted the first document to use the name Jet Propulsion Laboratory, originally a proposal to the Army for developing missiles in response to Germany's V-2 rocket. This led to Private A, which flew in 1944, and later the Corporal, the WAC Corporal, and other designs.

Von Kármán wrote of Tsien, "At the age of 36, he was an undisputed genius whose work was providing an enormous impetus to advances in high-speed aerodynamics and jet propulsion."13 During this time, he worked on designing an intercontinental space plane, which would later inspire the X-20 Dyna-Soar, a precursor to the American Space Shuttle.

though it was primarily for weapons design during WW2, and substantially different than the JPL we know today.

According to Wikipedia's Jet Propulsion Laboratory:

During JPL's Army years, the laboratory developed two deployed weapon systems, the MGM-5 Corporal and MGM-29 Sergeant intermediate range ballistic missiles. These missiles were the first US ballistic missiles developed at JPL.7 It also developed a number of other weapons system prototypes, such as the Loki anti-aircraft missile system, and the forerunner of the Aerobee sounding rocket. At various times, it carried out rocket testing at the White Sands Proving Ground, Edwards Air Force Base, and Goldstone, California. A lunar lander was also developed in 1938-39 which influenced design of the Apollo Lunar Module in the 1960s.6

Except for the 1939 lunar lander, it seems the projects undertaken were related to weaponry rather than space exploration. So while the name "Jet Propulsion Laboratory" remained the same, the actual entity we associate with space exploration was not really founded by said individuals. 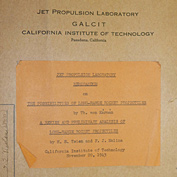 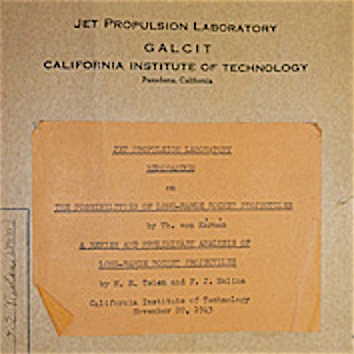 First Use of the Name "Jet Propulsion Laboratory"

Theodore von Kármán and his Caltech research team propose to the U.S. Army Air Corps a research project to understand, duplicate and reach beyond the German rocket program. In the proposal, the team refers to their organization for the first time as "the Jet Propulsion Laboratory." 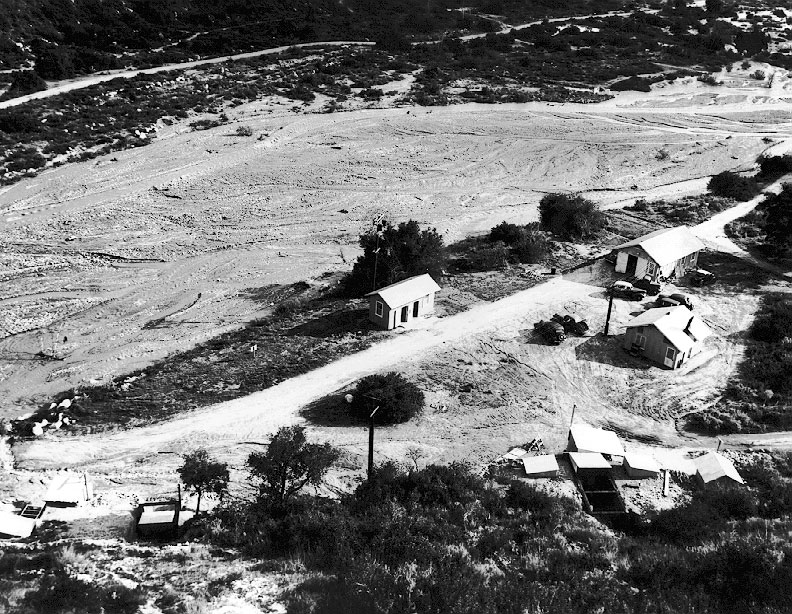 The young rocketeers were encouraged by Caltech professor and aerodynamicist Theodore von Karman. After the mid-November tests, he secured space for them on the Caltech campus. He also insisted that the experimenters know the mathematics that described the performance of their rocket motors.

Over time, the inventors' explosive and noisy motors proved too dangerous for the campus. In 1940, a new facility -- across the Arroyo from the original test site -- was built in the foothills of Pasadena. Three test stands and tarpaper shacks marked the first buildings of what von Karman would name the Jet Propulsion Laboratory in November 1943. He would become JPL's first director.

JPL traces its beginnings to 1936 in the Guggenheim Aeronautical Laboratory at the California Institute of Technology (GALCIT) when the first set of rocket experiments were carried out in the Arroyo Seco. Caltech graduate students Frank Malina, Qian Xuesen, Weld Arnold, and Apollo M. O. Smith, along with Jack Parsons and Edward S. Forman, tested a small, alcohol-fueled motor to gather data for Malina's graduate thesis.[citation needed] Malina's thesis advisor was engineer/aerodynamicist Theodore von Kármán, who eventually arranged for U.S. Army financial support for this "GALCIT Rocket Project" in 1939. In 1941, Malina, Parsons, Forman, Martin Summerfield, and pilot Homer Bushey demonstrated the first jet-assisted takeoff (JATO) rockets to the Army. In 1943, von Kármán, Malina, Parsons, and Forman established the Aerojet Corporation to manufacture JATO rockets. The project took on the name Jet Propulsion Laboratory in November 1943, formally becoming an Army facility operated under contract by the university.[3][4][5][6]

Name changes, scope changes, parent organization changes and funding changes do not mean the JPL we know today is not related to the 1936 informal organization.

Not the answer you're looking for? Browse other questions tagged nasa history government or ask your own question.

4
When was the first strap-on booster used in spaceflight?
4
What did JPL's 1939 lunar lander look like and what practical aspects of landing on the Moon did this engineering design address?

20
How did NASA Conclude that the General Theory of Relativity was not Needed for Earth-Moon Flight Path Computation?
1
When was the idea behind the DESCANSO Book Series first conceived, by whom, and what is it's “mission”?
3
Was the Orbit Pavilion triggered by real communications events?
6
What stole the INSPIRE cubesat launch opportunity, and will there be another?
0
How will the Gateway-before-boots sequence benefit US business, economic and technological development?
6
What information was stolen from JPL during the Raspberry Pi hack?
11
Did NASA muzzle Wernher von Braun during the moon landings?
1
How did NASA fund searches for extraterrestrial life before 1993? How were the searches done?
6
What “flickering goggles” do JPL scientists rely on to explore the Martian surface “in genuine 3D”?