How do astronauts keep their devices dry?

In these videos astronauts are drinking and playing with water. We can see water droplets floating away to the surroundings. Do these droplets affect the machines in any way? What do astronauts do to prevent devices getting destroyed?

Towels. Towels are used for this extensively. Hitchhiker's Guide wasn't making this part up, at least. Here's an 10 liter spill soaked up with towels this week.

For small spills, crew on board the ISS rely on evaporation to remove water that they can't mop up with towels.

The ISS ECLSS (Environment Control and Life Support System), which consists of several components spread around the station, has 2 main components for maintaining the atmosphere: Elektron on the Zvezda module, and the Air Revitalization System (ARS) on Tranquility.

Elektron is set to remove most of the water vapor to produce oxygen for the crew. However, in an emergency, both the ARS and Elektron can be used to reclaim drinking water. (Most reclaimed drinking water that goes to the Water Processor Assembly to make it potable comes from the Urine Processor Assembly and other wastewater sources, such as sinks.)

One side effect of working in microgravity is that, if something isn't bolted down, it eventually makes its way to the life support's inlets, either to be caught by a filter, or to be processed.

The answer is to be seen in the second video. The astronauts carefully catch the droplets with their mouth and swallow them. They should catch every single drop. The vacuum cleaner may be used too.

Astronaut Alexander Gerst said in an interview on German TV: "when we loose small parts, we find them later at the entrance mesh filter of the aircondition". (translation by me) So water droplets will be moved to the mesh filter too.

If an electronic device is cooled by forced air, there should be a filter at the air inlet too. No water drop may get into air outlet holes. 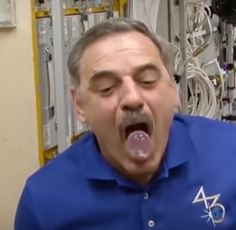 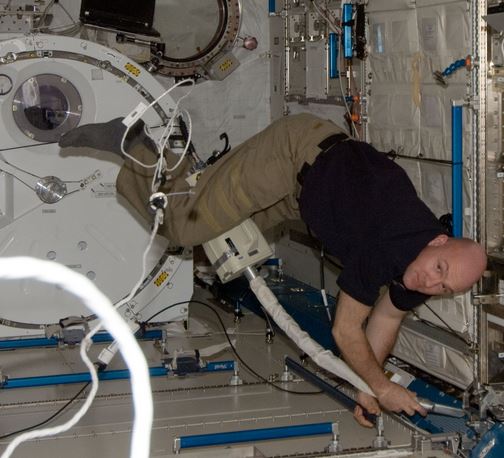 Not the answer you're looking for? Browse other questions tagged iss nasa astronaut-lifestyle or ask your own question.

19
My space station is filling with water

34
What kind of laptops do ISS astronauts use?
19
My space station is filling with water
20
Why does the interior of the ISS appear so disorganized?
17
Do astronauts get Netflix on ISS?
9
Can astronauts wear eyeglasses inside their helmets during launches and landings?
5
Do astronauts use their toes to grip with in zero gravity?
12
How do astronauts brew tea on ISS and what brewing temperature is common?
4
How exactly is the balance of minerals handled on ISS with the use of reclaimed (demineralised) water for human consumption?
6
Taking custom software or hardware to the ISS