In this question on quora, the first answer mentions that for Space Shuttle launches they changed the holding mechanism to explosive bolts from the clamps used to hold the Saturn V.

The video links below are copied from the answer, which shows the holding mechanisms in action:

Why did NASA switch to explosive bolts for the STS? A clamp mechanism appears much more reliable than explosive bolts. Were there any safety features which wouldn't ignite the SRB’s if the explosive bolts failed, or were SRBs powerful enough to simply break the holding force of a bolt in case they didn't explode?

The Saturn holddown arms were released pneumatically with a pyrotechnic backup.

Please refer to What holds the Space Shuttle orbiter itself stable on the launch pad? for details on the hold-down mechanism.

1) "And also was there any safety feature which wont ignite the SRB’s if explosive bolts fail?" No, the SRB igniters and the hold-down post release were fired simultaneously.

At T minus zero, the two SRBs are ignited, under command of the four onboard GPCs; the four explosive bolts on each SRB are initiated (each bolt is 28 inches long and 3.5 inches in diameter); the two T-0 umbilicals (one on each side of the spacecraft) are retracted; the onboard master timing unit, event timer and mission event timers are started; the three main engines are at 100 percent; and the ground launch sequence is terminated, initiating the onboard GPCs.

2) "Or were SRB’s powerful enough to simply break the holding force of a bolt in case they did’nt explode?"

Anecdotally the SRB could pull the bolts through the nuts if they didn't get blown apart but with severe trajectory impact. But I have no reference for that. Like any system that has bad effects if it fails, redundancy was designed in. An answer to Could the shuttle wait out the whole burn of SRBs on launchpad in case of a problem on launch? agrees that bolts could not hold down the SRBs after ignition, but it is also unreferenced.

Here's a frame from STS-112 engineering video showing a stud hangup (green). In a normal launch, the bolt preload would have caused it to retract into the stand by this point. 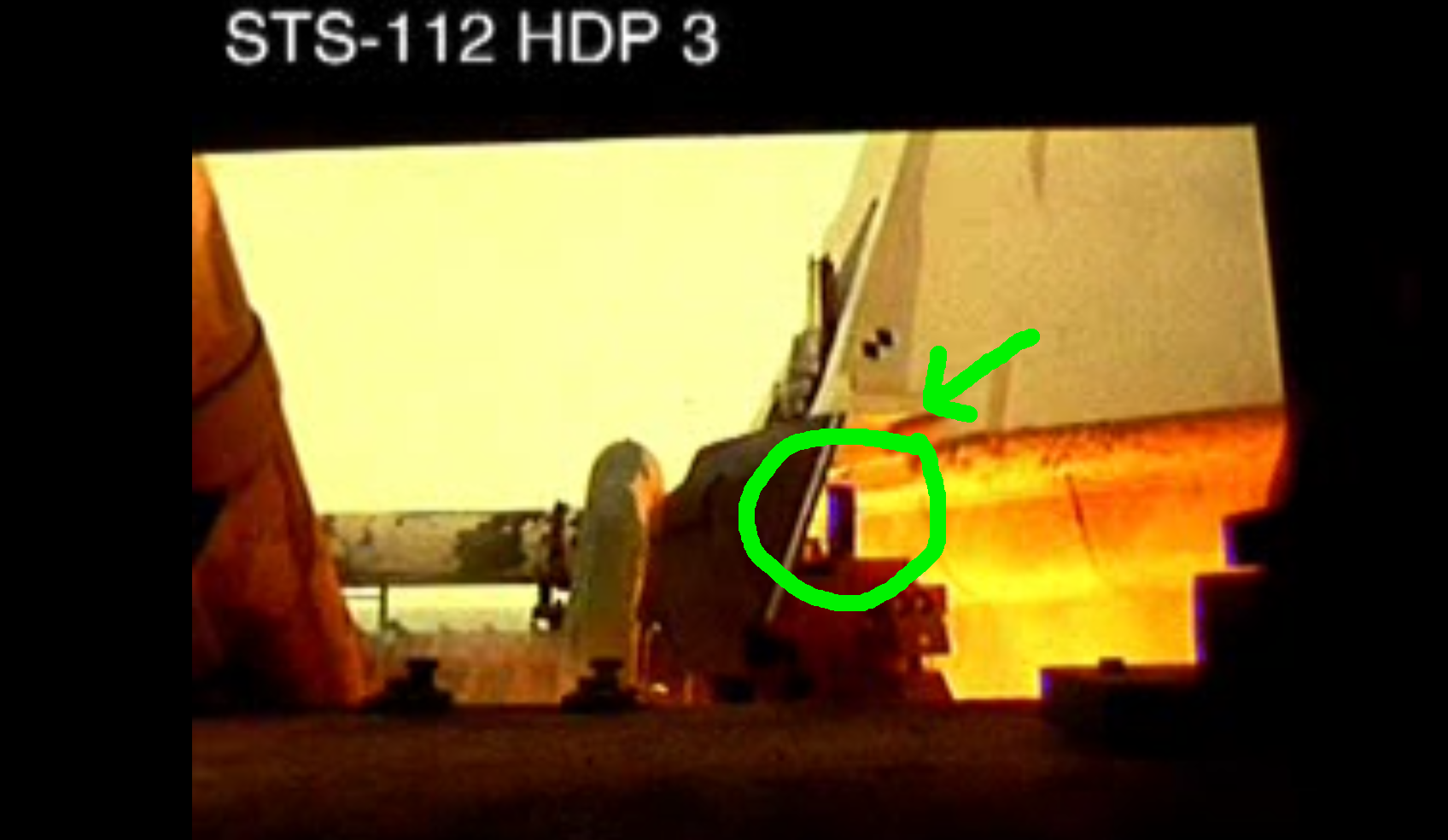 The STS video linked in the question shows a normal launch view of this hold-down post at about 1:21.

Not the answer you're looking for? Browse other questions tagged space-shuttle saturn-v launchpad mechanisms fastening or ask your own question.

47
Could the shuttle wait out the whole burn of SRBs on launchpad in case of a problem on launch?
10
What holds the Space Shuttle orbiter itself stable on the launch pad?
7
Reliability of explosive bolts and redundant initiators
8
What do hold-down clamps... clamp exactly?
7
Have any launch systems other than Saturn V used a controlled release?
5
Static Fire Tests: How is the rocket prevented from flying?
3
Trajectory impact in case of STS hold down studs failure

5
How does a spaceport differ from a launch pad?
3
LV Telemetry links on the launch pad
12
What dangers are on a launch pad after a successful launch?
9
Lunar launch pad cooling
3
Launch pad design considerations
10
What holds the Space Shuttle orbiter itself stable on the launch pad?
7
Have any launch systems other than Saturn V used a controlled release?
11
Vibration and noise during launch of the Saturn V and Spaceshuttle in comparison?
10
Does a photo with two Saturn V's on launch pad 39A and 39B exist?