What systems were used onboard Buran to determine its position during reentry and landing?

Since Buran has managed to return without crew on board, I assume computers had to know its position relatively accurately as it approached the runway for landing. How was this achieved?

I haven't found much about the Buran GNC systems in general.

You asked about the landing, though, and there was an article in the December 12 1988 issue of Aviation Week (sorry, paywalled) that described its autoland system extensively. Unsurprisingly, it was much like the US Shuttle's system, relying on ground based distance-measuring equipment to update its inertial guidance system. This is similar to how the US shuttle used TACAN (TACtical Air Navigation) stations for landing. On final approach, Microwave Scanning Beam Landing Systems (MSBLS or just MLS) were used, again similarly to the US Shuttle. 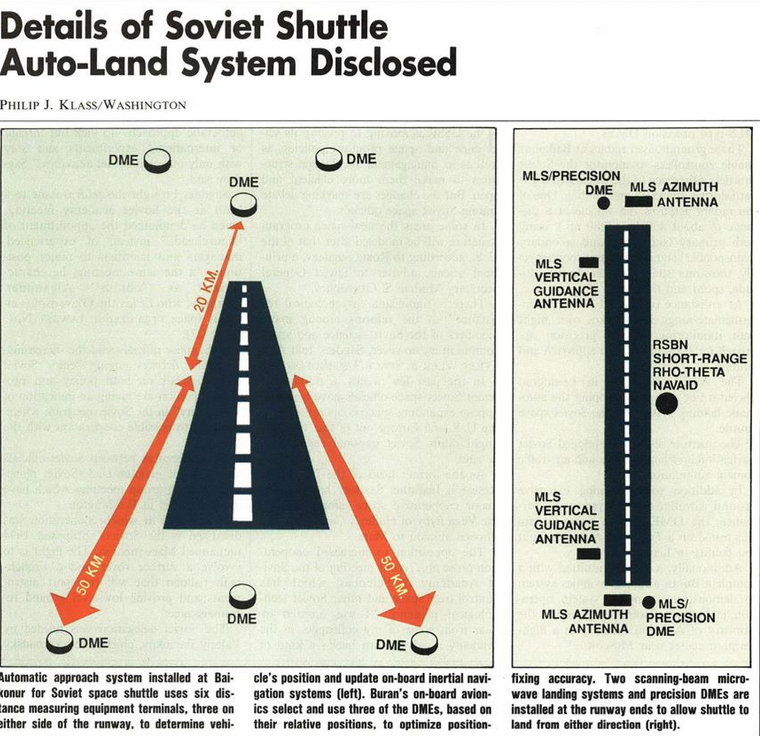 26
Could the Space Shuttle have landed on any long runway other than those specially reinforced at Kennedy (TTS), and Edwards (EDW)?
11
How did Energia Buran handle center of mass during flight?
6
Why were three engines used for the F9 1st stage landing burn (BulgariaSat-1)?
3
What are the questions and issues related to Kosmos 482's configuration and eventual reentry?
8
How was APAS-89 chosen for Buran and Kristall?
4
Was launch pad 110R ever used again after being obliterated on 3 July 1969?
2
What were Mars 2's conical aerodynamic braking shield and "gunpowder" engines?
4
Was the teletype machine on MIR the first printer in space? Is there a photo, and what frequencies were used?